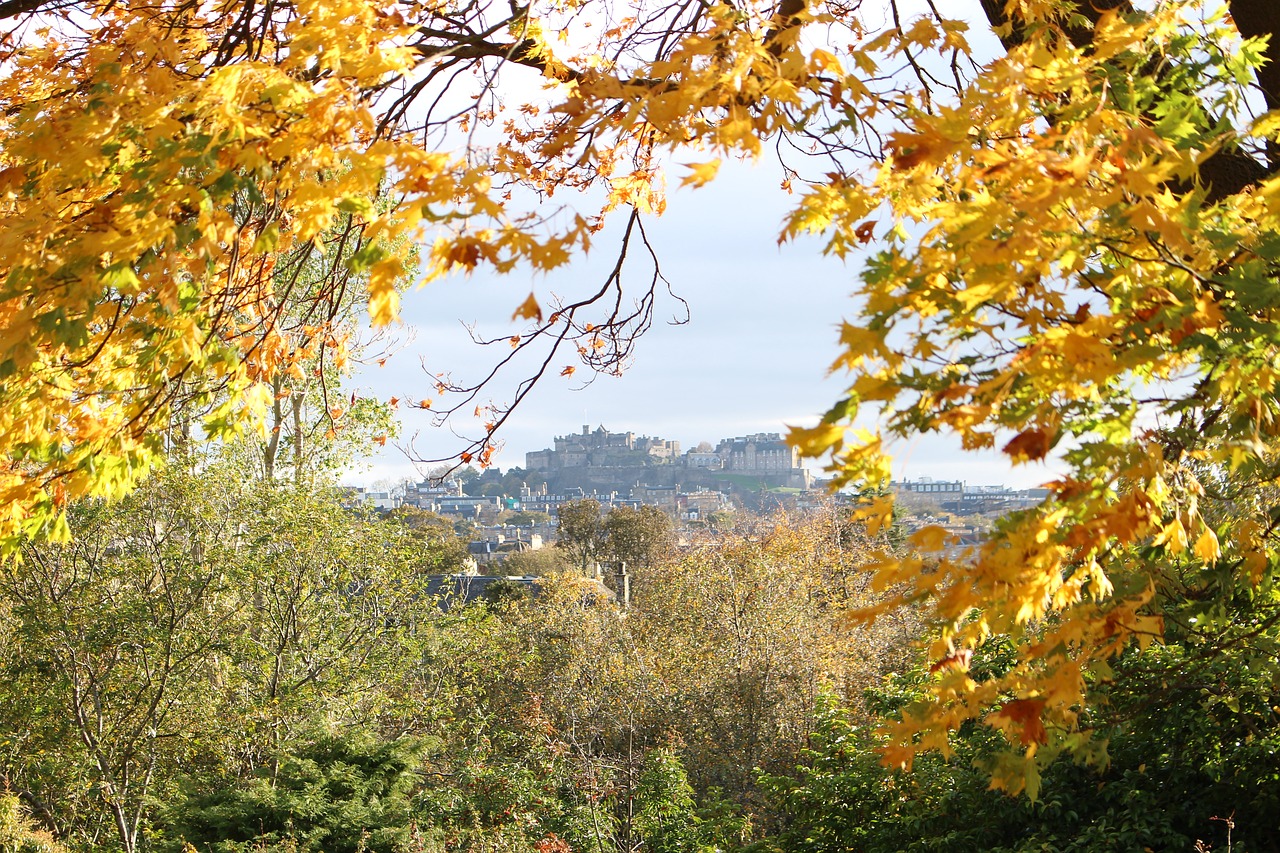 With the launch of Arctic Connections: Scotland’s Arctic Policy Framework, we wished to take this opportunity to explore the trade relationship between Canada (at the federal level), the three Canadian Territories in the Canadian North (Yukon, the Northwest Territories, and Nunavut) and Scotland, especially as trade is an important component of the document.

Currently, Canada and Scotland (by way of the UK) are involved in different trade agreements. For example, the Canada-European Union: Comprehensive Economic and Trade Agreement (CETA) is a free trade agreement and “entered into force provisionally on 21 September 2017”,[i] with the UK’s ratification taking place on 8 November 2018. Additionally, Canada and the UK are also parties to a number of WTO agreements.[ii], [iii]

Canadian and Territorial Trade by the Numbers

Canada, unfortunately, does not keep a separate record of trade with Scotland. Instead, these numbers are a part of Canada’s trade statistics with the UK as a whole. Table 1 provides an overview of this trade activity for Canada, as well as a breakdown for Yukon, the Northwest Territories and Nunavut for 2016 – 2018.

At a national level, the table shows that Canada increased the value of imports it received from the UK from 2016 to 2018, while there was a decline in the value of domestic exports from 2017 to 2018. At the territorial level, the table shows that Yukon and Nunavut have generally imported much more from the UK than they exported, while the Northwest Territories (NWT) did not have any significant import of goods from the UK during this time period. However, Nunavut substantially increased the value of its exports to the UK in 2018. 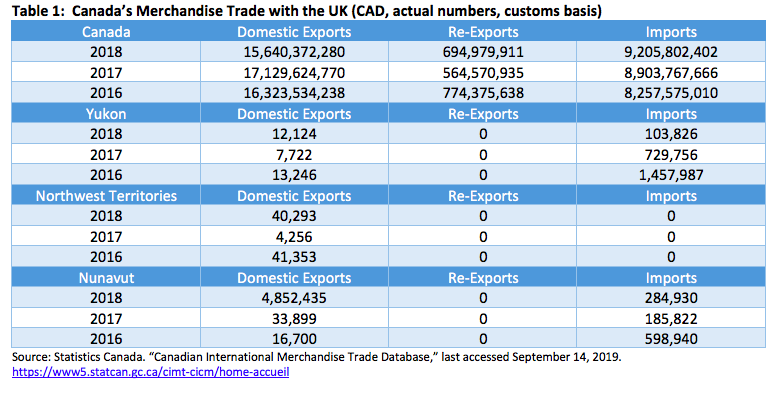 The short-term trends in Table 1 raise interesting questions about what opportunity there is for the Territories to grow their domestic exports to the UK and Scotland. These opportunities can be better understood in relation to the international Harmonized System Code,[iv] which Canada uses to classify exports and imports (see Table 2) at both the national and territorial/provincial levels. 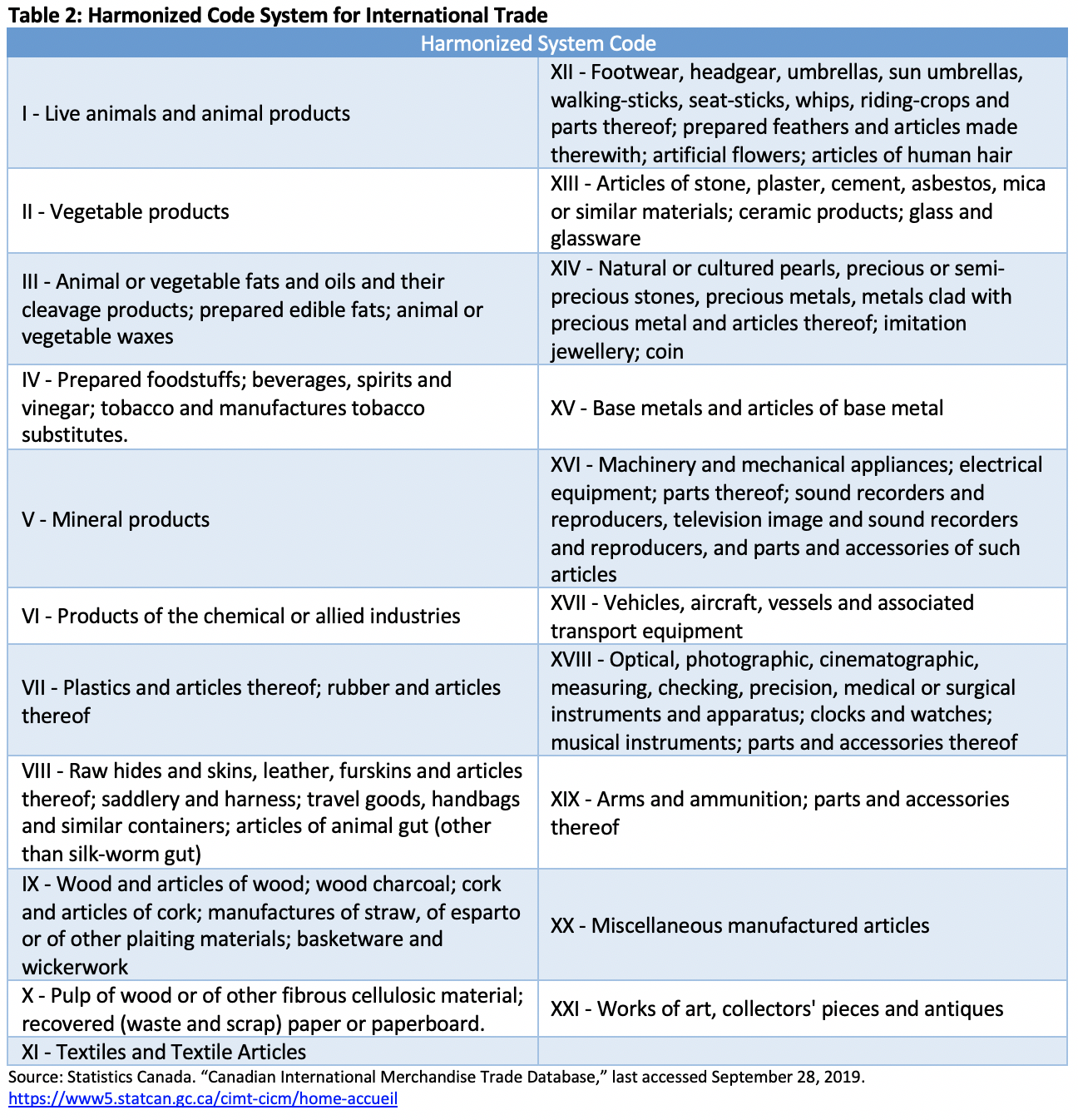 The value of Territorial exports to the UK is shown in Table 3 and is organised according to the HS Codes. For Yukon, there has been a decline in the number of categories (HS Codes) from which goods were exported to the UK. There has also been an increase in the value of goods in Codes I (Live animals and animal products) and XXI (Works of art, collectors’ pieces and antiques), which shows the potential for continued growth in these areas, even if the values are currently modest. The Table also shows a loss as Yukon did not export goods to the UK from HS Code XVII (Vehicles, aircraft, vessels and associated transport equipment) since 2016, which was their highest valued export during this three-year period.

For the NWT, the Table shows that HS Code XVI (Machinery and mechanical appliances; electrical equipment; parts thereof; sound recorders and reproducers, television image and sound recorders and reproducers, and parts and accessories of such articles) provides the most opportunity for the Territory, while there is a potential growth opportunity in HS Code XVIII (Optical, photographic, cinematographic, measuring, checking, precision, medical or surgical instruments and apparatus; clocks and watches; musical instruments; parts and accessories thereof). There also appears to be a lost opportunity in HS Code XXI (Works of art, collectors’ pieces and antiques) as the NWT have not exported anything to the UK from this code since 2016.

Nunavut has a different pattern with their exports. For instance, the number of HS Codes from which Nunavut exported doubled from 2016 to 2017, and then reduced by a third in 2018 as the Territory started to export goods from HS Code V (Mineral products). This suggests a focus on mining exports rather than diversifying the range of exports from the Territory. However, the value of goods exported in HS Code XXI (Works of art, collectors’ pieces and antiques) increased consistently during this three-year period, suggesting a possible area of growth.

Table 3 also shows that there is minimal consistency between the Territories in term of what goods are exported from the region to the UK, with the exception of goods from Code XXI (Works of art, collectors’ pieces and antiques), and to a lesser extent in Code XVIII (Optical, photographic, cinematographic, measuring, checking, precision, medical or surgical instruments and apparatus; clocks and watches; musical instruments; parts and accessories thereof). This suggests that each Territory has different areas of expertise, and that as a region, the Canadian North has the potential to provide goods in a range of categories, even if the extent to which it can do so differs.

Nunavut also experienced a decrease in the value of imports it receives from the UK, although not to the same extent as Yukon. With the exception of 2017, Nunavut received the highest value of imports from HS Code XVII (Vehicles, aircraft, vessels and associated transport equipment) and imported a more diverse range of goods based on the number of HS Codes in 2017 and the least in 2018.

Table 4 also shows that with the exception of Nunavut in 2017, Yukon and Nunavut generally do not receive the same categories of imports. This suggests that each Territory requires different goods.

Scotland’s Trade by the Numbers

Table 6, however, shows that the United States of America (USA) is the final destination for not only the majority of exports to North America, but also Scotland’s exports in general even though the EU is the largest regional destination. Canada, highlighted in yellow, therefore, receives substantially less from Scotland than the USA. 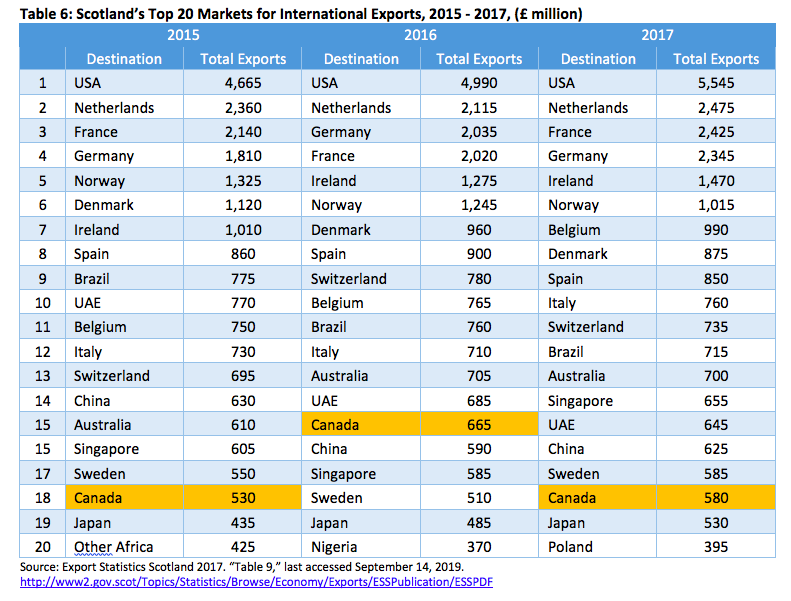 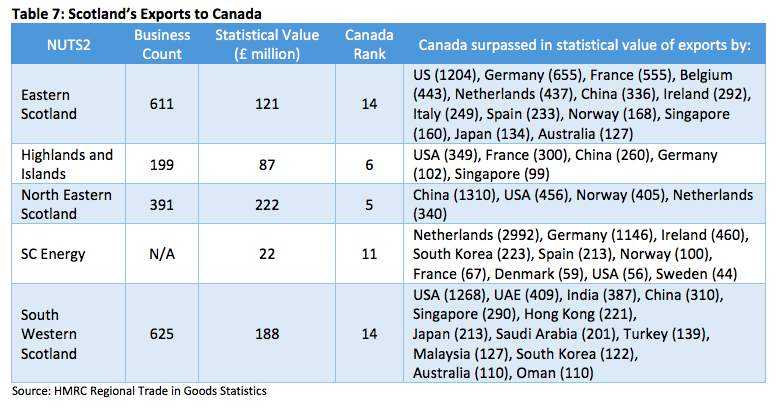 Certainly, Canada is an important market for Scottish exports.

Prior to the release of Scotland’s Arctic Policy Framework, efforts were already underway to increase trade between Scotland and Canada. For example, the Scottish Government had identified that “key sectors where Scotland could sell more are:

Some of these align with the types of products the Territories are importing based on the HS Codes discussed earlier. To further improve economic relations, Scotland opened “a new office in Canada to strengthen economic ties between the two countries”[vi] in 2019.

Scotland’s Arctic Policy Framework indicates that trade continues to be a priority as part of the economic development plan. The document explains that “Arctic countries are major trade partners for Scotland, accounting for around 27.5% of our total exports and five of our top 20 export destinations in 2017”, with the goal to increase Scottish trade in general.[vii] The Framework further explains that Canada is “among the top export markets showing the strongest near-term growth potential for Scotland.”[viii]

The potential for increased trade between Scotland and Canada is further supported as Canada’s recently launched Arctic and Northern Policy addressed trade (in general) in its international chapter. More specifically, the Policy recognises that the Federal Government can do more to improve Northern trade and, among other things, “Canada will use its Trade Commissioner Service to better connect Arctic and northern businesses—including Indigenous-led businesses and women entrepreneurs—with export opportunities provided by free trade agreements”.[ix] Our recent article by Andrew Chater draws attention to the scope for multifaceted engagement between Scotland and Canada.

The tables from the previous sections show there is potential for increased exports form the Canadian Territories to Scotland in certain areas and that Canada is also a top destination for Scottish exports. Both Canada and Scotland have recently released new Arctic/Northern policy frameworks that identify increased trade as a policy objective. As such, it should be expected that trade between Canada, the three Territories and Scotland will increase in the coming years.

[iii] As the UK moves closer to Brexit, “the Government’s aim is to roll over the EU’s trade agreements into equivalent UK-third country agreements.” While this has yet to be negotiated for CETA, “it was reported in September 2017 that the Canadian Government was looking for a ‘seamless transition’ of its trading relations with the UK after Brexit.” See: Dominic Web. CETA: the EU-Canada Free Trade Agreement. Briefing Paper Number 7492. House of Commons Library: May 7, 2019, 18. https://researchbriefings.files.parliament.uk/documents/CBP-7492/CBP-7492.pdf

Dr Karen Everett is a Fellow at Polar Research and Policy Initiative, with a focus on trade and investment in the Canadian North, as well as border security in Arctic and sub-Arctic borderlands. Karen is also a Postdoctoral Fellow with the Canada Research Chair on Comparative Aboriginal Condition at Université Laval. She completed her PhD program at the Frost Centre for Canadian Studies and Indigenous Studies at Trent University where her research examined security in the Canadian North, including emerging regional border management issues. Additionally, Karen explored how securitisation theory and the principles of multi-level governance can contribute to the policy-making process. Karen is also a member of the UArctic Thematic Network on Geopolitics and Security and was previously a Research Scholar with the Arctic Futures Initiative at the International Institute for Applied Systems Analysis (IIASA) in Laxenburg, Austria. Karen is currently based in Québec City, Canada.