What are the UK’s Interests in the Arctic? 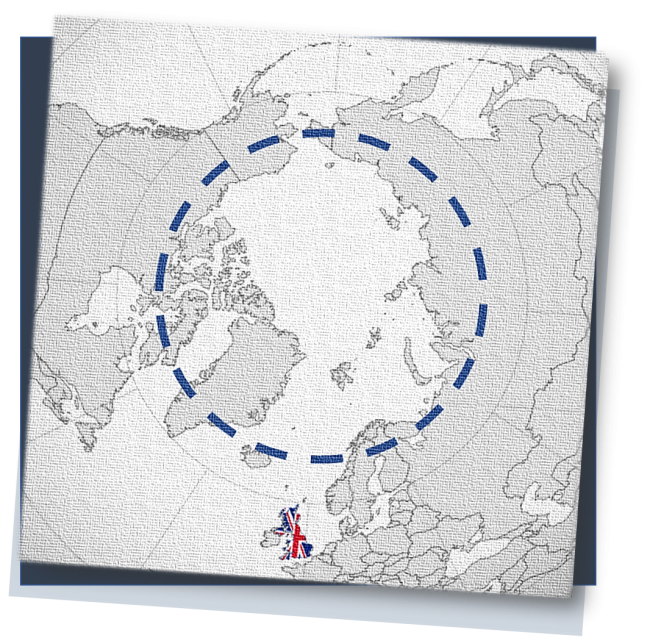 The UK has been cautious in forming and enacting an Arctic strategy thus far. In many ways, this is unsurprising given that it is not an Arctic state, and thus its regional role is secondary to the 8 states in the High North. However, the UK does have a number of national interests in the region, and the Arctic will present increasing opportunities and challenges in the coming decades. The UK forms the closest landfall south of the Arctic and is its closest neighbour, its northernmost point just 400km south of the Arctic Circle. Global interest in the Arctic is increasing, and failure to engage in the region fully could endanger the UK’s regional interests. In order to avoid being outmanoeuvred by less capable states, the United Kingdom must build upon the 2013 ‘Adapting To Change’ strategy and increase its focus and engagement in the region. This article will outline the UK’s interests in the region and speculate how these could enhance engagement going forward.

Climate Change is a global issue with wide ranging implications across the planet. In the United Kingdom, across political lines, there is dedication to leading on issues of climate change and mitigating their effects. Following the election of climate sceptic Donald Trump in the United States and the political turmoil afflicting the European Union and its states, it could fall to the UK to be a leading global voice on climate issues. Inevitably, looking to tackle climate issues leads to focus on the world’s polar regions. The Arctic is at the forefront of the battle against climate change, with global warming impacts increasingly clear in the region. In the Arctic, there are a number of major mechanisms at play that are affecting global systems, so-called feedbacks by which Arctic change impacts the rest of the planet; an example of this would be the changes in reflectivity of the earth’s surface. Snow and ice serve to reflect approximately 80% of the sun’s rays, and as they melt, their reflectivity declines proportionally, which then serves to hasten the earth’s warming. There are numerous indicators that highlight the warming of the Arctic region. Arctic ice levels have been decreasing rapidly, tying a record low with 4.14 million sq km in September 2016. Sea temperatures in 2016 also saw significant rises with temperatures averaging 4 degrees above average between October and November, 2016.

The United Kingdom, along with other states, must be proactive in looking to combat regional change. As the closest landfall to the Arctic, the UK is particularly vulnerable to Arctic weather variation. The cold winters of 2009 and 2010, for example, were a result of Arctic temperature variation. Scotland, geographically the closest part of UK territory to the Arctic, has recorded warming seas of 1⁰C over the last 20 years. This has already resulted in changing ecosystems, and if these trends continue, it could impact regional UK economies like Scottish fisheries. In St Kilda, for example, declining Puffin populations have been blamed on warming climate. The Arctic Council, in 2010, recognised that Arctic climate change has impacts beyond the region, and thus other states not within the Arctic gained a voice in Arctic climate government. The UK is an observer in the Arctic Council, and could use its position in this forum to voice initiatives and plans for regional action. Given that the United Kingdom has advanced scientific and research facilities based in the Arctic and at home, it is well placed to conduct regional research and work alongside other states in collaborating regional climate data.

The deterioration of Western-Russian relations, following Crimea’s annexation and exacerbated by events in Syria, has led to changing security conceptions in the Arctic. In reality, there has long been concern that Russia under Putin may attempt to play an expansionist role in the region, going back as far as 2007, when explorer Arthur Chilingarov planted a Russian flag beneath the North pole. After recent Russian aggression, the Arctic is frequently viewed by commentators as a frontier. Enthusiasm for a permanent NATO role within the region has increased in some quarters, and this would directly impact the United Kingdom as a member of the alliance, giving the UK a clear stake in regional security developments.

5 of the 8 Arctic states are also members of the NATO military alliance, while Sweden and Finland are increasingly moving to collaborate with the organisation. Distrust of Russia is understandable, given their military activities in other theaters, and the lack of transparency regarding Russian military buildup and drill in the Arctic. Russian actions have concerned allies, and with good reason. Russia has unparalleled military strength in the Arctic with 2/3rd of its Naval force based in the Kola Peninsula. Russia has shown its military strength in the Arctic in a number of major military operations, including part of its Vostok exercise, the largest post-Soviet drill at the time.

An emboldened Russia has, from 2014, increasingly tested the United Kingdom’s defence response times. Russian submarine activity in the Arctic is naturally a concern for security planners as through these waters they can access UK maritime territory. Tracking Russian submarine activity around UK waters has been a challenge for the United Kingdom, following the retirement of the Nimrod MR2 plane. This was apparent in 2015, when off Scotland’s waters, the UK required the assistance from a French plane and other NATO allies to search for suspicious activity. This capability gap has recently been recognised and addressed as part of the 2015 SDSR. Following the review, 9 P-8 Poseidon planes were ordered.

It should be noted that despite increased security fears from the UK’s allies, cooperation in the Arctic on low level issues has been maintained, and deepened in some instances, post Crimea. The UK attended the first annual White House Ministerial in 2016, which also saw a Russian delegation present and working collaboratively with the other states. While there is nothing inevitable about security competition with Russia in the region given the geopolitical situation, the UK has moved to improve its capacity to fight in cold weather theatres. The Royal Marines form the UK’s only dedicated mountain and Arctic warfare specialists, and conduct a number of training exercises to prepare and remain prepared for Arctic warfare. Royal Marines conduct Arctic preparation war games in Scotland annually, as part of their cold weather training. In January 2017, 400 commandos endured sub 0 temperatures, and conducted cold weather training in war games designed for Arctic conditions, as part of excercise ‘Green Claymore.’ The UK’s military has agreements in place with Norway, allowing the military to utilise Norway’s Bardufoss military base inside the Arctic for training exercises. The air wing of the Royal Marines has been tested in the Arctic with the 845 Merlin’s going to Norway’s base in Bardufoss in March 2016, clocking 120 hours of flying time. The UK army also conducts training efforts out of the Bardufoss base. The army maintains the ability to fight in the Arctic, with training courses for reserves and regulars.

With potential security issues in waters north of the UK, and with a likely increase in maritime traffic as sea ice melts, the UK Naval forces may increasingly see themselves patrolling in the Arctic and surrounding waters. The UK had not sent a submarine to the Arctic following an accident in 2007, on board HMS Tireless, which killed 2 soldiers. As shipping increases north of UK territorial waters, and the Russian threat grows, the prospect of restarting extended patrols in the UK’s northern waters and tours of the Arctic become more attractive. It should, of course, be noted that this project would be a major stretch on naval resources, and greater investment alongside the Trident successor program would have to be made.

The UK engages in a number of Arctic research projects in which it lends its expertise and resources. Going forward, these links could provide leverage with regional states. Examples of such projects include an EU Integrated Arctic Observing System, a project with a €15.5 million budget, involving 49 partners in 20 European and non-European countries. Another example is the Blue Action project, which examines the Arctic’s impact on weather and climate. The end goal of this project is the implementation of the Trans-Atlantic Ocean Research Alliance, and to the EU’s Blue Growth Agenda, along with supporting sustainable growth in marine and maritime sectors as a whole. It has a budget of €7.5 million, involving 116 experts from 40 organisations in 17 countries. The UK plays a leading role on projects like ICE-ARC (Ice, Climate, Economics – Arctic Research on Change). This project is managed by the United Kingdom, and involves researchers from 21 institutes from 11 European countries. These links to the Arctic will promote UK engagement further in the coming years, and highlights the excellence of the UK’s research facilities.

Developments in the Arctic will offer fruitful commercial opportunities in certain sectors. The United Kingdom, and certain regions in particular, will increasingly find opportunities for investment and engagement. Scotland, for example, could capitalise on its geographic position, and establish itself at the heart of a wider Trans-Atlantic ‘Arc of Prosperity.’ The Arc of Prosperity includes the United States, Canada, Greenland, Iceland, Faroe Islands, Denmark, Norway, Sweden and Finland. Investment in emerging industries among these Arctic nations is likely to be significant, as most Arctic nations are among the world’s most productive economies, and with the exception of Russia, they enjoy strong reputations in business, for their stability and respect for the rule of law.

As Arctic maritime activity increases, the United Kingdom is well placed to explore shipping opportunities such as the creation of a container hub off Scotland’s northern coast, in a location such as the Orkney Isles. Arctic tourism could well increase as ships are able to independently navigate Arctic waters. In September of 2016, Crystal Serenity became the first cruise ship to pass through the Northwestern passage. The UK could be well placed to take advantage of such opportunities, and regions may see a boost in tourism as a result. Arctic oil developments will also have an impact and provide opportunities for the UK’s energy sector. While the UK doesn’t have a claim to these resources, new oil production in the Arctic would likely move its way through UK markets. UK companies like BP could also play a role in oil extraction projects going forward. Currently, however, they will not be able to do so in projects with Russian companies as a result of the sanctions regime.

The UK has a strong incentive to increase engagement with Arctic states and the Arctic region. Climate change, Arctic security dilemmas and opportunities for UK research and investment will and should pull the government to plan more thoroughly the UK’s policy in relation to the region. The United Kingdom is an expert within certain fields of research, and its engagement within the region is valuable in recording and mitigating the impact of climate change. Given that the UK will continue to respect the rights of the Arctic states to set the agenda, and their sovereignty over resources, it is likely that increased engagement on regional issues will be well received.

Richard Clifford is an Associate in the Geopolitics and Security Unit at Polar Research and Policy Initiative. He is completing an MSc in Defence, Development and Diplomacy at Durham University and has an undergraduate degree in History and International Relations from the London School of Economics. Richard has experience working as a open source conflict analyst at Intelligence Fusion and his research interest centres mainly on Russian foreign policy in addition to geopolitical and security issues in the Arctic.