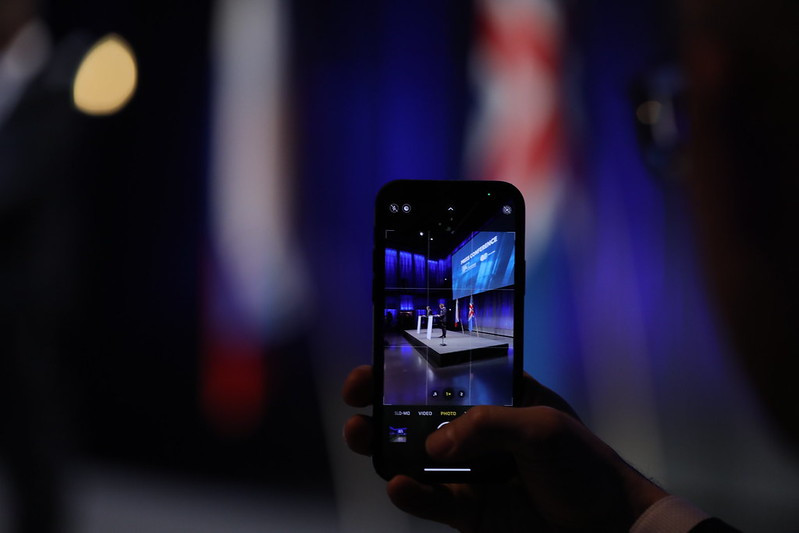 After the tumultuous Arctic Council Ministerial meeting in Rovaniemi two years ago, which concluded with no unanimous formal declaration, and with a significant wedge driven between the United States and the other seven members of the organisation, there was an general feeling of relief that this week’s gathering of Arctic foreign ministers in Reykjavík was very much a ‘no drama’ affair.

There was much general agreement about the need for redoubled efforts to address regional climate change threats, as well as combat sources of local pollution. A Reykjavík Declaration, along with a Arctic Council Strategic Plan which will guide the group’s activities until 2030, was signed by all parties. The meeting, held using a hybrid format due to ongoing restrictions caused by the pandemic, concluded with Iceland passing the Chair position to Russia for the next two years.

In the days leading up to the meeting, there had been two distinct sets of messages from the Russian government regarding its Arctic interests as well as its plans for the Council during its Chairing period. One pointedly spoke of Moscow’s willingness to defend its Arctic interests. Last month, the government of Vladimir Putin cited the Russian Arctic as a ‘red line’ which the West should be wary of challenging. More recently, foreign news agencies were granted a tour of Russia’s Arctic Trefoil military base, (also known as Nagurskoye / Нагурское), on Franz Josef Land (Земля Франца-Иосифа), immediately before the start of the Reykjavík meeting, providing an opportunity for Moscow to demonstrate its augmented military capabilities in its Arctic lands.

The Putin government also elaborated on various contributions which Russia could offer to regional cooperation initiatives in the Arctic, with an emphasis on sustainable development. The policy document published by the Russian delegation, which outlined the country’s priorities for the Council, placed much emphasis on environmental protection and human capital, including the roles of Indigenous Peoples and youth. The document also acknowledged the economic potential of the Arctic in the areas of shipping and tourism, and called for improved regional cooperation with like-minded regimes, including the Arctic Economic Council. 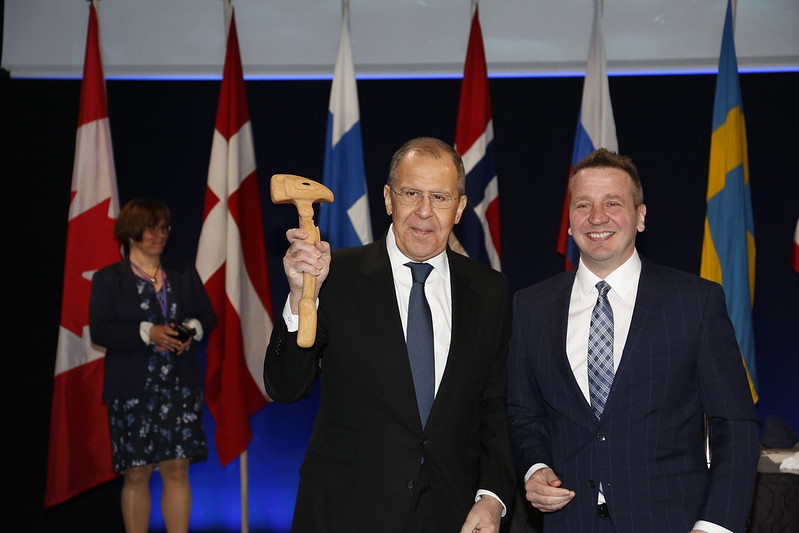 One recommendation made at the gathering by Russian Foreign Minister Sergey Lavrov which generated some comment was the idea that the option of holding military dialogues in conjunction with the Council should be revisited. In his statement, Mr Lavrov suggested that although the Arctic was ‘a territory of peace, stability and constructive cooperation’, it was nonetheless necessary to expand cooperation, ‘to encompass the military sphere as well’. This would potentially involve meetings between military Chiefs in the Arctic states, along similar lines as what took place before 2014, when those activities were suspended after the Russian annexation of Crimea.

Military affairs had traditionally been the ‘third rail’ of the Arctic Council, and it was stated in the original 1996 Ottawa Declaration which founded the Arctic Council that the body ‘should not deal with matters related to military security.’ In a short press conference after the meeting, Mr Lavrov reiterated his support for rebutted military dialogues. However, the host of the gathering, Icelandic Foreign Minister Gudlaugur Thór Thórdarson, stated he was not in agreement with that proposal.

The Ministerial meeting provided the first opportunity for a face-to-face meeting between US Secretary of State Antony Blinken and his Russian counterpart. The side meeting between the two was positive, and appeared to set the stage for a potential summit later this year with President Putin and US President Joe Biden. The Biden government also agreed this week to drop plans to place sanctions on a firm overseeing the construction of the Nord Stream 2 Russia-to-Germany natural gas pipeline, a decision which further lowered the diplomatic temperature.

However, Mr Blinken had made it clear before the Reykjavík meeting that Moscow was advancing ‘unlawful maritime claims’ in the Arctic Ocean, suggesting that security concerns had not been removed from Washington’s regional agenda.

The US Secretary of State’s remarks confirmed that his country was seeking to return to the spirit of greater Arctic cooperation, including in combatting threats to the regional environment. This provided a welcome contrast to the stance of the previous administration, which repeatedly denied the very existence of climate change. Mr Blinken focused on the specific threats of black carbon and methane emissions as well as maritime plastic pollution. He also stated the Arctic was becoming a space for greater competition, but that ‘the Arctic is more than a strategically or economically significant region. It’s home to our people. Its hallmark has been and must remain peaceful cooperation.’ 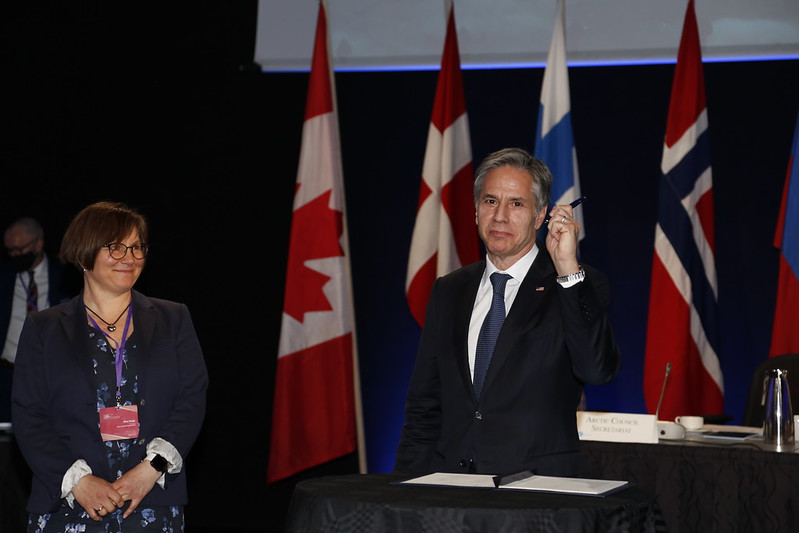 Secretary of State Blinken had travelled to Reykjavík as part of a greater Nordic regional tour, starting with a meetup in Copenhagen with Danish officials and Prime Minister Mette Frederiksen, (Mr Blinken also confirmed the US government had abandoned the prospect of buying Greenland). After the Reykjavík conference, he then traveled to Kangerlussuaq to meet with Greenlandic Prime Minister Múte Bourup Egede on matters related to closer bilateral economic cooperation, including via the October 2020 Common Plan for US-Greenland Cooperation.

There were few surprises in either the Reykjavík Declaration or the Arctic Council Strategic Plan, reflecting an interest in keeping thorny political and security issues at bay in favour of focussing on the core agendas of the Council: environmental and scientific cooperation. The Declaration emphasised the necessity of ongoing cooperation in the areas of addressing climate change and green energy, sustainable regional development, human security, and marine protection. The paper also called for a further strengthening of the Council and cooperation with related bodies including the UArctic educational network and the Arctic Coast Guard Forum.

One notable omission from this year’s Declaration, however, was a decision taken on the admission of new Council observers. Four states, (Czech Republic, Estonia, Ireland and Turkey), had submitted applications to become formal observers in the organisation, potentially joining the thirteen governments with that status.

However, there was no mention of observer admissions in the final agreement, suggesting any decision in this regard had been deferred, similar to the situation in 2015, when the Council’s Ministerial meeting in Iqaluit also concluded without an agreement on new observers. Switzerland, which had been seeking a formal observer position that year, reapplied and was successfully admitted at the 2017 meeting in Fairbanks.

There was much fanfare surrounding the publication of the Council’s first ever Strategic Plan. However, the final document did not significantly differ from either the Reykjavík Declaration or previous policy statements made by the organisation.

Again, there was a concentration on climate change concerns, development, human security and strengthening the Council, along with the need to improve regional knowledge and communications. As one commenter noted, there was little in the way of specific reforms as well as a lack of ambition in the paper. With the Arctic continuing to gain more global attention, including from non-Arctic states and involving questions of evolving security concerns, there remains the question of whether the Council may be required to further evolve in order to meet these changed conditions.

Politics aside, the environmental threats of to the Arctic show no signs of going away. This week, both Russia and parts of central Canada were experiencing record high springtime temperatures, further underscoring the fact that climate change continues to represent a significant challenge to the Arctic, and well beyond.

This commentary was originally published on Over the Circle blog and has been reproduced here with permission.

Dr Marc Lanteigne is an Associate Professor of Political Science at UiT: The Arctic University of Norway, Tromsø, specialising in China, East Asia, and Polar Regional politics and international relations. He has previously taught in Canada, China, New Zealand and the United Kingdom, and has researched throughout the Arctic region, as well as on Antarctic politics and legal issues in Argentina, Australia and NZ. He is the author of Chinese Foreign Policy: An Introduction, co-editor of the Routledge Handbook of Arctic Security, and has written several books and articles about Chinese and Asian politics and foreign policy, including in regards to polar diplomacy. He is chief editor of the Arctic news blog Over the Circle, which has been cited and quoted in international news services including CBC News and Quartz. His current research includes work on the politics of non-Arctic states, including in the Asia-Pacific, within the Arctic policy sphere.