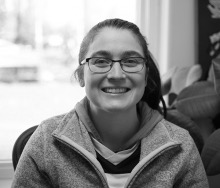 Liz Bowman is a Contributor and former Fellow at Polar Research and Policy Initiative, focusing on the role, interests and priorities of non-Arctic actors in the Arctic.

Prior to working at the University of Alaska, Liz supported Arctic initiatives professionally within government and the non-profit sectors. She also serves as a Council member for the Association of Polar Early Career Scientists (APECS).

Outside of her professional and academic interests, Liz enjoys spending time with her family, traveling, and the best sport in the world… curling.