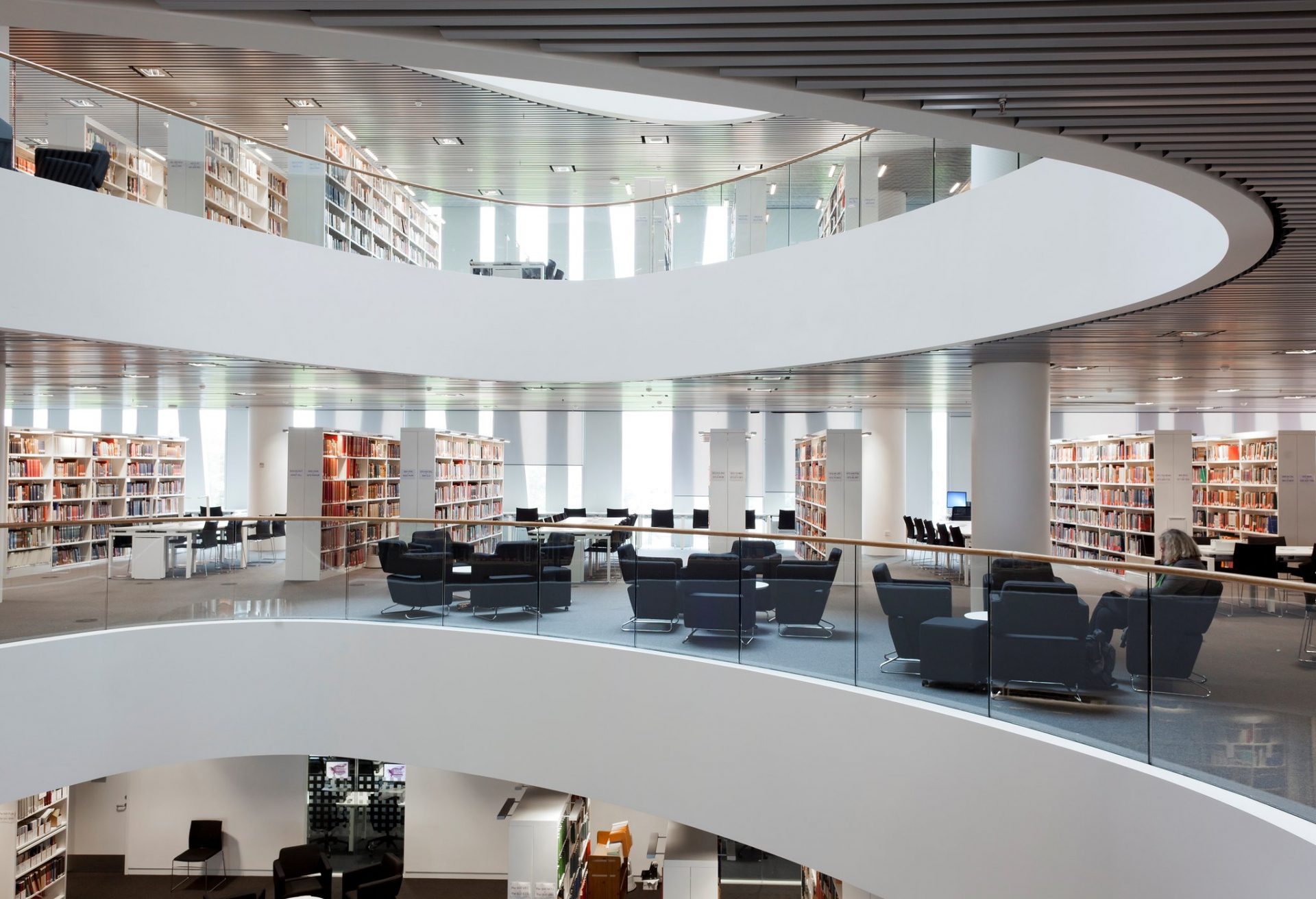 Scotland is well-positioned with the release of its Arctic policy to create strong linkages between its existing programmes and institutions and those in the Arctic region. One avenue for cooperation in is within the education sector, where Scotland participates already with the United Kingdom, European Union and Arctic states. This brief will describe Scotland’s participation and lead in Arctic programmes and highlight its institutional engagement. The conclusion will suggest areas for increased collaboration.

Scotland works within the UK’s Arctic Programme structure to assist with large-scale Arctic initiatives. One unique international collaboration is the INTERACT project (International Network for Terrestrial Research and Monitoring in the Arctic). Scotland uses its ECN Cairngorms station to provide regular measurements of the natural environment to study how and why it is changing. Likewise, through the UK Arctic Office, Scotland maintains formal representation with other Arctic institutions, including the Arctic Council, International Arctic Science Committee (IASC) and the United Kingdom Arctic and Antarctic Partnership (UKAAP).

Through the European Union, Scotland engages in the Northern Periphery and Arctic Programme. This programme aims to expand the horizon of the “northern periphery” region and seeks to generate “vibrant, competitive, and sustainable communities, by harnessing innovation, expanding the capacity for entrepreneurship, and seizing the unique growth initiatives and opportunities of the Northern and Arctic regions in a resource efficient way.” This programme is unique in that it engages only the northernmost reaches of the EU including: Finland, Sweden, Scotland, Northern Ireland, Faroe Islands, Iceland, Greenland, and Norway. This programme explores the commonality of the north and seeks solutions to regional problems. This is a strong source of engagement for Scotland, and its future work could be used to assist other countries across the Arctic. 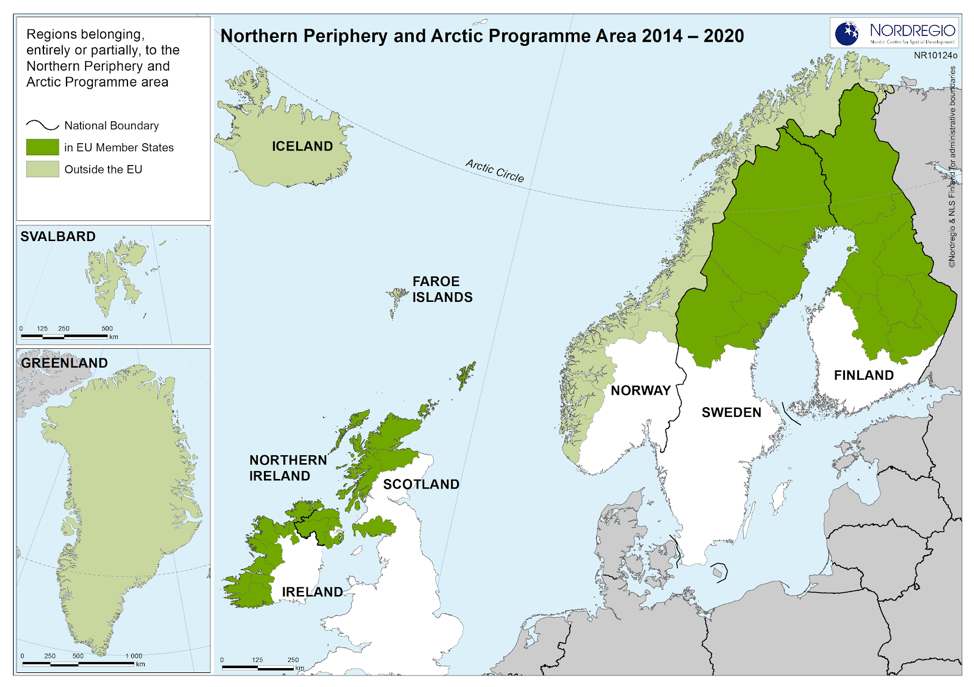 The North Sea Region Programme, through the European Union’s European Regional Development Fund, aims to support sustained economic growth across the North Sea Region, which can be seen in the map below. The programme has 4 thematic areas including: thinking growth, eco-innovation, sustainability, and green transportation and mobility. There are three Arctic states that participate in the North Sea Programme, including Denmark, Norway, and Sweden. Although one project within the scope of the programme focuses exclusively on the Arctic, this is a great area for Scotland to continue working on issues with clear connections to the Arctic. For example, within eco-innovation, there are several research projects focused on alternative energy and low-to-no carbon outcomes. Other areas of expertise include a focus on rural development, where lessons learned could very easily be translated to communities across the Arctic. This is just one area where Scotland can encourage project proposals alongside Arctic states that have increased applicability to the Arctic region. 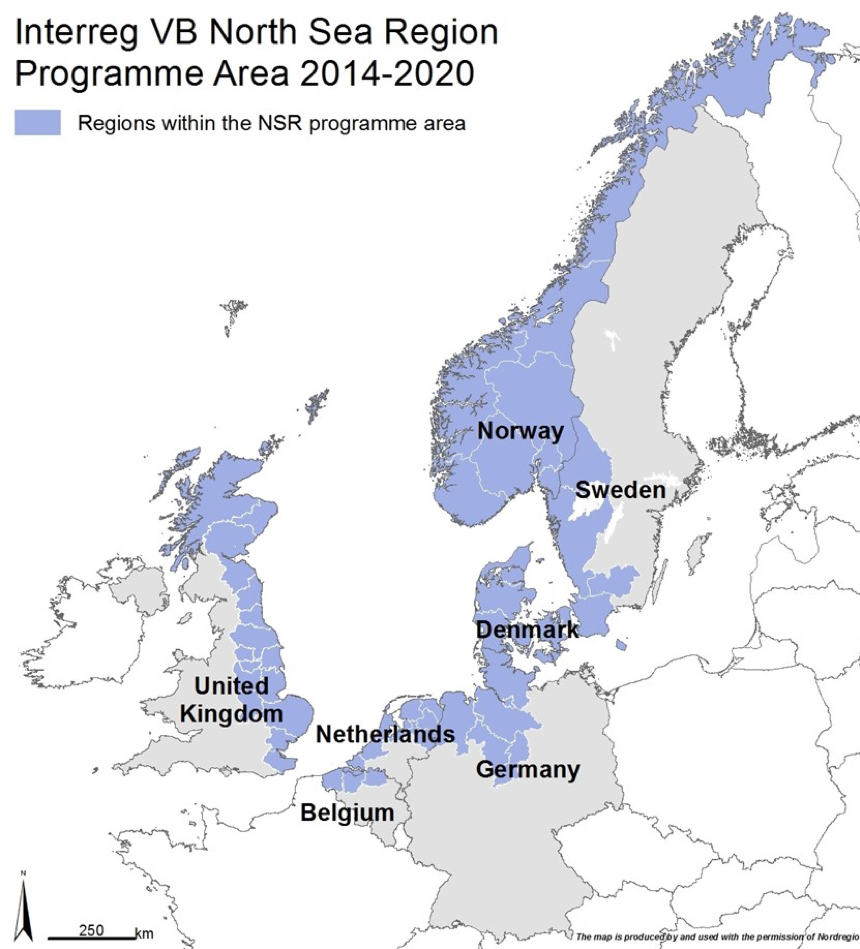 An additional components of importance noted directly in Scotland’s policy is the importance of student and staff mobility, which can be facilitated both within the UArctic consortium as well as directly with Arctic states. Existing partnerships include the UArctic North2North programme, the Erasmus + programme, as well as direct study opportunities with countries such as Norway – which has emphasised the importance of student mobility. It is important to note that Scotland has a rich background in rural education, which is a strong connection to practical application of knowledge in the Arctic. Scotland has pledged to continue building on this foundation to support Arctic states that would like its assistance with best practices within rural education.

In March of 2019, the Scottish Government alongside the Highlands and Islands Enterprise hosted an Arctic Day in Inverness. This event celebrated Scotland’s ties to the Arctic region over hundreds of years and facilitated conversations regarding the educational and programmatic partnerships that Scotland has, and will continue to grow in the Arctic. It was affirmed that the continued engagement with the UArctic system will be mutually beneficial to both Scotland and Arctic States. In this spirit, Scotland is likely to continue fostering this institutional relationship for years to come, likely considering other areas where they can contribute expertise, or additional Scottish institutions that would work well within the auspices of UArctic.

Perhaps the most unique educational programme mentioned within Scotland’s Arctic Policy is The Polar Academy, a charity programme for struggling 14-17-year old secondary school students that seeks to build self-esteem through a rigorous training programme that ends in a Greenlandic excursion. Once the students return to Scotland, they share their experiences with peer groups and inspire others to achieve their goals and find confidence. Similarly, the Scottish Arctic Club is a group of Arctic enthusiasts that regularly tackle expeditions across the north. The group provides expedition grants to encourage young people (30 and younger) to explore the Arctic in pursuit of adventure, science, or art.

Scotland has a wealth of its own expertise that can lend to the increased development and growth of the Arctic region. In addition, Scotland has a special aptitude for culture, arts and rural development that blend seamlessly with the ideals of shared consideration for Arctic’s own deep history and cultural complexities. There are natural avenues where Scotland can increase its institutional collaboration and programmatic support of Arctic Initiatives. For example, Scotland’s universities have expertise in rural education and development. They could, through the UArctic structure or directly, increase their collaboration with rural institutions in the Arctic, to create best practices within that area. Likewise, Scotland has a wealth of arts and cultural activities that are world renowned. Through new and continuing initiatives, take for instance small scale programmes like the Alaska’s Far North Fiddle Fest, where Scottish artists participate. There are opportunities to grow institutional and cultural connections around the Arctic that lend themselves to Scotland’s unique perspective.