Observers to the Arctic Council and their Benefits 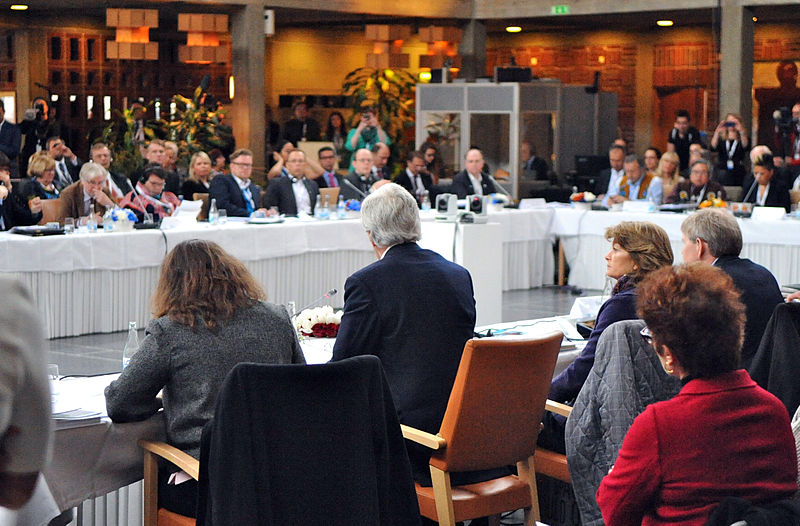 The Arctic Council has been widely accepted as the forum in which Arctic states convene to discuss the region’s high level and working level affairs. The Council consists of the 8 Arctic states, 6 permanent participants, and as of the last ministerial meeting, 39 observers including non-Arctic states, intergovernmental or inter-parliamentary organisations, and non-governmental organisations. The 7 newest observers are: Switzerland, the World Meteorological Organization, the International Council for the Exploration of the Sea, Oceana, the Oslo-Paris Commission, the West Nordic Council, and the National Geographic Society. Although the latest round of accepted observers did not draw nearly as much attention as the batch admitted in 2013, there is still much to be explored about observers to the Arctic Council.

The Arctic Council Observer Manual, published in 2013, serves as a guide for observers and those interested in the position that observers fill within the Arctic Council. Those who become observers must be decided upon with consensus from the Arctic states and it must be established that “the Council determines (the observer) can contribute to its work.” Furthermore, observer status only continues so long as consensus exists among the Council’s ministers, and any observer that acts to violate the provisions set out in the Ottawa Declaration or Rules of Procedure may have their Observer status terminated. Observer states are encouraged to make relevant contributions, particularly within the working groups of the Council. Relevant contributions include participation in working group projects through knowledge sharing or financial support.

If observers play by the above rules, there are many opportunities for each to form lasting partnerships with one another – other Arctic states, permanent participant groups, or even other observers. Some of these partnerships are visible at the working group level of the Arctic Council, where an observer might partner on a project of mutual interest between a member of the Council and itself. For instance, the Protection of the Arctic Marine Environment (PAME) Working Group, highlights many projects within its bi-annual work plan that include partnerships with observers. One of these projects, led by the United States and Aleut International Association, aims to create a framework for enhanced engagement from observers in the Council. The observers on this specific project are Italy and the Republic of Korea.

Another venue for observer contributions encouraged by many within the Arctic Council is the recently established Álgu Fund. This fund is meant to provide a stable source of financial support for the permanent participants of the Council in order to foster greater participation on projects and programmes from their communities. Many observers see this as an opportunity to directly support the needs of indigenous peoples of the Arctic region.

The biggest question remains: what are the benefits of observer status within the Arctic Council? Perhaps the most obvious is the ability to sit in the back of the room at Arctic Council meetings. Any information gleaned can have an impact on the formulation of one’s own national policies or strategies (if the observer is a state/regional body) or on the type of projects that one should pursue (if the observer is an NGO). Additionally, the access that one has to high-level government officials within the confines of the Council provides a unique opportunity to form relationships that operate outside the auspices of the forum. The majority of air time for observers within the council, however, is at the working group level. It is here that observers can make substantive contributions of intellectual, financial, or otherwise valuable resources to the ongoing work that is formally accepted within the Arctic. This ensures that the observer is a welcome contributor. For many, the Arctic Council’s granting of observer status is a legitimising stamp of approval for one to have Arctic interests, be it a state, IGO, or NGO, and to act on those interests within the norms set by the Arctic community.

In return, what do the Arctic states and permanent participants of the Council gain from increased observer participation? Many gain new partners for achieving the work that needs to be done. This could be anything from scientific research on climate change to regional community development projects. Observers not only provide a fresh perspective, but they also bring critical resources to help complete projects that might otherwise not happen. Likewise, observers often participate in other Arctic programming that benefits the Arctic region based off of their status within the Council. For instance, many observers are also members of the International Arctic Science Committee and the University of the Arctic, both which support critical components of Arctic research and education. In the end, Arctic Council members and observers need one another as the impacts of the Arctic are realised around the globe.