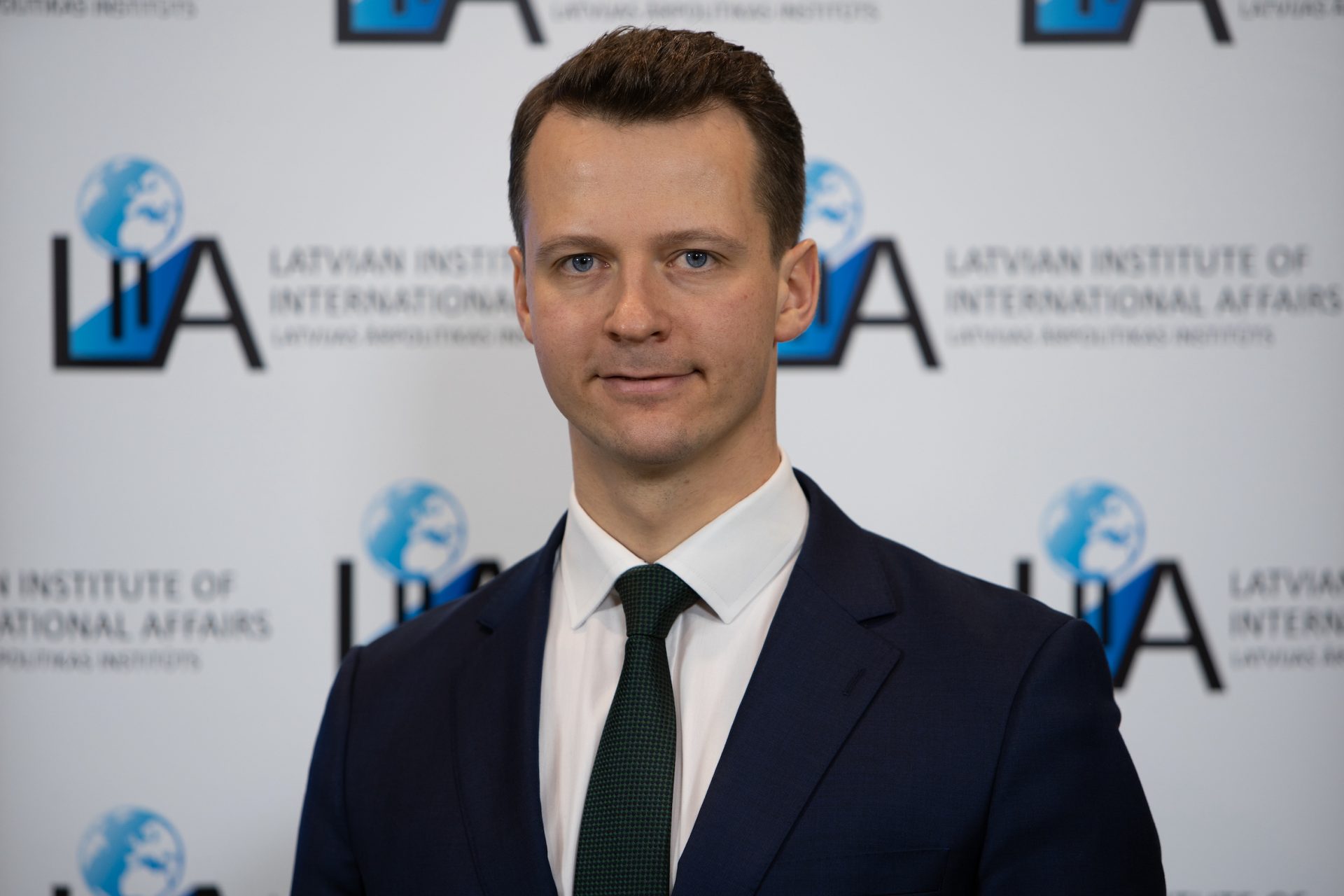 Today’s interview is with Mārtiņš Vargulis, a researcher at the Latvian Institute of International Affairs and lecturer at Riga Stradiņš University, who has also served as the Head of the Defence Policy and Strategy Section, as well as diplomat, at the Permanent Representation of the Republic of Latvia to NATO and EU. Could you tell us about yourself and your career so far?

I am currently a researcher at the Latvian Institute of International Affairs. I hold an MA in International Relations, and I am studying for a PhD at Riga Stradiņš University. In my academic career, I have focused on issues concerning Russia (particularly security, economy and soft power), the World Trade Organisation, NATO and EU security related issues, as well as the European Neighbourhood. I have written numerous articles, and I am the scientific editor of several books. I also lecture at Riga Stradiņš University.

In my long-standing professional career as a representative at the Ministry of Defence of the Republic of Latvia, I have also acted as Head of the Defence Policy and Strategy Section, as well as a diplomat, at the Permanent Representation of Latvia to NATO and the EU.

What has sparked your interest in Arctic affairs?

The interest in Arctic policy is attractive from a multi-factor perspective. As a result of ongoing climate change, the Arctic region is transforming in many dimensions and will continue to do so, particularly in terms of Arctic flora and fauna and rising water levels, which can influence surrounding nations’ ecosystems. As the ecosystems of the region shift, potential for new trade opportunities through the Arctic, availability of undiscovered conventional resources and the possibility of more habitable infrastructure rises. The land areas of the Arctic are under the auspices of a number of global players, such as the United States, Russia and Canada. In this respect, the Arctic has the potential to change relations between countries, as there is increased interest from other countries who have restored their national strategies for the Arctic – for example, China, France and the EU. By combining the above arguments, the Arctic region has the potential to become an important catalyst in international relations, which is fascinating.

What are Latvia’s past and present connections with, as well as interests and specialisms in, the Arctic?

What are the priorities for Latvian Arctic engagement today? What sort of activities has Latvia undertaken in this regard?

An important priority for Latvia’s interests and involvement in the Arctic is mitigating the effects of climate change. Latvia’s current position on the European Union and global climate issues corresponds with solving the Arctic’s environmental problems. Latvia’s participation and expertise in solving Arctic issues can become a contribution to the development of science and the economy of the entire polar region. From an economic perspective, activities in the Arctic provide opportunities for Latvian entrepreneurs in areas such as digitalisation, automation, transport and satellite systems. Currently, the first polar research centre in Latvia is actively involved in the study of glaciers in the polar regions, which is significant for further climate change and ecosystem research on the Arctic region.

Has Latvia worked with Arctic and Nordic bodies? Does Latvia hold any official status in such bodies?

Latvia doesn’t hold any official status at the Arctic Council. However, there has been close cooperation with Nordic countries and bodies. Latvia is a part of the Nordic-Baltic cooperation format and Northern Group that, among other issues, address the activities taking place in the High North.

Are there any Arctic strategies being implemented in Latvia, or in the making?

Latvia is in the process of making and implementing a national strategy for the Arctic. Latvia has also officially declared willingness to be a candidate for Observer status on the Arctic Council. In addition, Latvia supports the strategy developed by the European Union in the Arctic region.

What do you see as the key sectors of cooperation between Latvia and the Arctic/Nordic region?

Latvia is in favour of all approved international agreements. Latvia is committed to and respects the need to mitigate climate change by actively reducing greenhouse emissions, thus reducing the pollution and temperature rise that is felt most strongly in the Arctic. Latvia has ratified the Paris Agreement and complies with the EU Green Deal, as well as implementing its national energy and climate plan. In this respect, joint climate change mitigation and science are the unifying elements of future cooperation.

Security policy raises issues for Latvia and the Nordic countries. Russia owns most of the Arctic territory, which is experiencing increasing military activity. In this respect, the relations between Latvia and the Nordic countries remain ever closer, with the unifying component being the implementation and maintenance of the security and defence strategy. Latvia advocates for peaceful political activity in the region, but does not rule out the expansion of Russia’s potential area of interest in the Arctic. In addition, the willingness of other countries to intervene in the region has the potential to create tensions in the areas of political relations and economic cooperation.

Latvia is in favour of new and long-term cooperation in the field of trade. The Latvian market is open to new business initiatives to cooperate with foreign partners. Trade between Latvia and the Arctic countries exists and will continue to develop in various areas.

Could you tell us more about the bilateral relationships that Latvia has with Arctic and Nordic states?

Could you tell us more about the Arctic institutional landscape in Latvia, including who the key players within government, academia and civil society are?

Arctic issues are the subject of Latvia’s top officials and foreign partners. Latvia has taken a strong step forward in promoting its candidacy for Observer status in the Arctic Council. Topical issues in the Arctic region related to climate change, future prospects, mutual relations and security between the countries are gaining increasing relevance and importance in defining Latvia’s foreign policy strategy. The issue of the Arctic has been strengthened in the daily work of the Ministry of Foreign Affairs.

So far, there hasn’t been any political and public debate in Latvia on the global significance of Arctic issues and their impact on Latvia’s environment, economy and security. That is why the Ministry of Foreign Affairs is starting this conversation in Latvia, involving other stakeholders (ministries, universities, researchers, public organisations and entrepreneurs). It should be noted that the number of Arctic professionals in various fields will increase over time.

Bilateral relations between Latvia and Russia historically have been closely linked and largely challenging. Since the development of a peculiar and aggressive regime, concern about protection from Russia’s potential intervention in Latvia or other neighbouring countries has been at its highest point. Relations between Latvia and Russia are tense and challenging. However, it should be noted that a sufficiently large minority of Russians live in the territory of Latvia, as well as there being other unifying components binding the neighbouring countries. Despite the countries being connected, Russia’s aggression in Ukraine has created tensions and concerns. In this respect, NATO adaptation measures implemented after Russia’s aggression in Ukraine is of utmost importance to the security of the region. Relations between NATO Member States and Russia are becoming increasingly difficult, and the growth of Russia’s illegal interests in Ukraine are causing tensions and calls for further action. Therefore, the Baltic States are among the most active participants in the formation of national security strategies, actively promoting NATO’s common interests and advocating for assistance to Ukraine.

Since 2004, Latvia has been a Member State of NATO. It is a cornerstone of the security of our country. Having experienced Russia’s aggressive behaviour in recent years, Latvia has been continuously advocating for more Allied presence in the region. Therefore, the enhanced Forward Presence of the Alliance is of utmost importance and will have both military and non-military effects.

Finally, what do you see as the greatest challenges to the Arctic?

When it comes to the Arctic, the greatest challenge is geopolitical rivalry among great powers, which has intensified the militarisation of the High North.

Mārtiņš Vargulis is a researcher at the Latvian Institute of International Affairs. He holds an MA in International Relations and currently continues his PhD studies at the Riga Stradins University. In his academic career, he has focused on issues concerning Russia (particularly security, economy and soft power), the World Trade Organization, NATO and EU security related issues, as well as the European Neighbourhood. He is the author of numerous articles and the scientific editor of several books. He is also a lecturer in the Riga Stradins University. In his long-standing professional career as a representative at the Ministry of Defence of the Republic of Latvia, he has been Head of Defence Policy and Strategy Section as well as Diplomat at the Permanent Representation of the Republic of Latvia to NATO and EU.

Alisa Musanovic is a Global Leadership Fellow at Polar Research and Policy Initiative. She is a graduate of a History BA at the University of Oxford and a recent graduate of an International Double Master’s Degree jointly studied at the School of Slavonic and East European Studies at UCL and University of Helsinki.