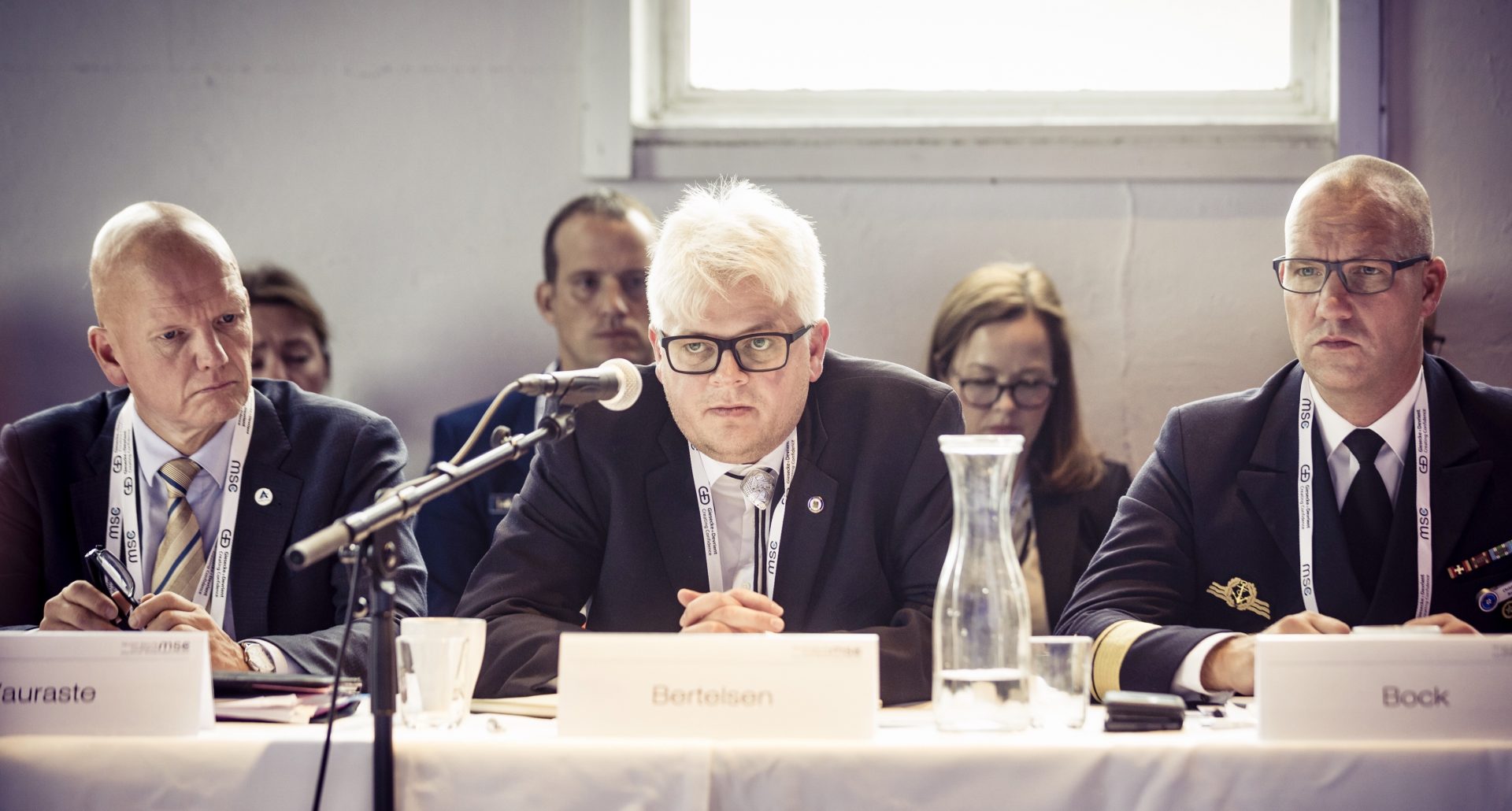 In this ‘Polar Matters’ interview, Professor Rasmus Gjedssø Bertelsen, Professor of Northern Studies and Barents Chair in Politics at UiT The Arctic University of Norway in Tromsø, speaks to Lana Ollier of Polar Research and Policy Initiative about his research career spanning Denmark, Iceland, Switzerland, The Netherlands, France, the United Kingdom, the United States and Norway; the emerging GCC-Russia-China LNG Triangle; and the role of transnational knowledge networks and epistemic communities to govern complex systems. You can read his latest paper on the GCC-Russia-China LNG Triangle here.

Would you be so kind as to share with our readers a little about your rather exciting, distinguished and, if I may say so, “transnational” academic background and the research you engage in?

I am Professor of Northern Studies, which is basically Arctic International Relations, and I hold the Barents Chair in Politics at the UiT The Arctic University of Norway, Tromsø. However, I am a Danish national who grew up in Reykjavík, and it is this personal background which has made me interested in the North Atlantic, the Arctic and the High North altogether.

I pursued my studies and education in various places. I started out studying in Copenhagen in Denmark and Reykjavik in Iceland, and I continued my Master’s studies in Lausanne and Geneva in Switzerland. I also spent one year at the University of Amsterdam in The Netherlands. Finally, I did my PhD in International Relations and Political Psychology at the University of Cambridge and Science Po in the UK and France.

In my PhD, I focussed on elite perceptions of the international system – more precisely, I looked at how decision makers and experts perceive things, how they are socialised to perceiving the world in a certain way, and how this distinct perception is also reflected in their policies.

For example, I found over the course of this research that France, for a long time, has used French language education abroad as a foreign policy tool. This research inspired my first post-doc at the Kennedy School of Government at Harvard University, where I looked at the soft power developed through American and French Universities in the Middle East, taking the example of the American Universities of Beirut and Cairo and the Université Saint-Joseph de Beyrouth.

I continued to focus on transnational knowledge relations during my research stay at United Nations University in Japan, where I also focussed on transnational higher education. To fast forward, after Japan, I worked at Aalborg University in Denmark for three years focussing on Sino-Danish knowledge relations. The common theme in all of these different projects was the focus on transitional knowledge networks, and that is something I continue to focus on as a Professor of Northern Studies.

Why does the research on ‘transnational knowledge networks’ play a particularly big role in the Arctic?

Because polar science is very, very expensive, a lot of the polar science is done jointly between different countries, which makes the Arctic and Antarctic extremely interesting to look at in terms of science diplomacy. In looking at those communities, we are trying to understand how experts work together, how that socialises them, and how this creates these transnational knowledge networks and even epistemic communities.

Why is it particularly interesting to look at the Arctic in the context of epistemic communities?

My interest has always been how to adapt Arctic Governance to global change. The Arctic has been a part of the international system for centuries and has reflected the Euro-centric international system of those centuries. However, we are currently in the midst of a power transition that affects the whole world, including the Arctic – that is, of course, the transition of power from the West to the East, with the rise of China. You can look at these global changes in many ways, but the way I am interested in looking at them is in terms of how experts and decision makers see and adapt to this perspective.

What can we gain from looking at transnational knowledge networks and epistemic communities in the Arctic context?

Historically, we know that attempts of power transitions have often led to extremely violent conflicts – in particular, in the West. With the rise of the Eastern world and in particular China, there is a looming threat of a conflict. Therefore, if the United States and China do not get this power transition right, it is exceptionally dangerous for the world. The Arctic is, of course, just one case in which this transition will take place, and it is not nearly the most dangerous case – the most dangerous case are the maritime disputes in East Asia.

In this context, it is important to understand that this kind of ‘knowledge relations’ that we are talking about here is not necessarily based on a common point of agreement or disagreement, but is instead focussed on knowing each other well, knowing each other’s point of view, and developing shared knowledge and understanding of things. My hope is that perhaps this makes the world a little bit more secure.

My hypothesis is that if old and rising powers can build a higher level of mutual understanding, that could significantly reduce the danger of conflicts in this or any other power transition. Assuming this hypothesis was right, should we engage more in forums like the Arctic Council, or what direct conclusion could we draw from this?

The implications would be to increase all kinds of research and educational exchange, but there is also a temporal aspect to that question. When you engage students, young researchers, you don’t have short term policy impacts, but you build the connections for the long term. If you engage with more senior people, you might have some kind of policy impact now, although it might not be the most profound and lasting.

Can you summarise in a couple of sentences for a non-academic community what you looked at in your most recent paper The GCC-Russia-China LNG Triangle: The Role of Transnational Knowledge Networks and Epistemic Communities to Govern Complex Systems?

I think what people should take away from this paper is that the Arctic is very much a part of the world, politically, economically and security-wise. When the world changes, the Arctic’s connection with the rest of the world changes too. Currently, the region is affected by two big changes going on in the world right now. On the one hand, there is climate change from an environmental perspective, and on the other hand, there is the rise of Asia – and in particular, China – when it comes to society, politics and economics. While those two changes have a large number of consequences, some of which we touched upon earlier, they also mean that China, Japan and South Korea will be the largest energy customers of the world – and in particular, the Middle East.

If we look at those questions in the context of energy supply and consumption, we know, of course, that the Middle East has enormous energy resources both in crude oil and LNG, which will be increasingly exported to Asian countries. On the other side, climate change also means that the Arctic becomes accessible in new ways. For example, this will allow cargo vessels to sail along the Northern coast of Russia in ways that you couldn’t before. And also Russia has all those natural resources and minerals that won’t only become more accessible but also easier to transport. With new transport routes opening up through melting sea ice, it will be possible to bring those Russian natural resources to Asia in ways that were not possible some years and decades before. This leaves us with new patterns of interactions between the Arab Persian Gulf, Russian Arctic and East Asia.

What role do knowledge relations next to trade relations – in particular, related to LNG – play for those growing relations between the Middle East and Asia and Russia and Asia?

We can look at LNG trade as a complex system, wherein improving the working of this system will take enormous investments on the production as well as consumption side. Because LNG can be shipped, as opposed to traditional gas, it can go anywhere, which means that the Middle East’s LNG and the northern Russian LNG both become part of the same global LNG system.

In this context, all actors involved – public, private or anything else – depend on common knowledge of the system that allows them to act strategically in this system. This brings us back to the knowledge relations, which are formed in parallel with new commercial, physical connections of energy trade between Asia and the Middle East, and between the Arctic and East Asia.

Can you give us a concrete example of how those knowledge relations become relevant in the context of energy trade?

If you think about risk management – for example, what Lloyd’s of London does – risk management in those very capital-intensive industries, like shipping and energy, is often highly knowledge-based. Therefore, in order to make this global LNG system, it depends on knowledge and knowledge relations to manage risk. Simply looking at the numbers of potential Sino-Russian energy trade links, they are out of this world – meaning billions of dollars – so naturally there must exist the knowledge and knowledge networks to manage those numbers and risks.

As I explained before, here new commercial physical connections, energy trade and new knowledge to manage those systems are developed in parallel. But in terms of the depth of those knowledge relations, history obviously plays a role. For example, the Middle East has been heavily dominated by the West militarily, politically and intellectually since Napoleon’s invasion in Egypt in 1798. While China is on a massive learning curve that exceeds everyone else in building intellectual connections with the rest of the world, they are just lacking behind.

In a way, the highly-developed Western academic freedom assures a certain openness. However, between the Middle East and China, you will have cooperation between two closed societies and societies where you have limits to academic freedom. This is particularly problematic in social sciences and humanities. However, humanities and social sciences are central for those relations to be powerful and useful. Therefore, the less academic freedom on both sides, the less powerful those connections will be. The more critical those academics, the more useful they are.

Are you interested in learning more about the subject? Then, do take a few minutes to read Professor Rasmus Gjedssø Bertelsen’s paper ‘The GCC-Russia-China LNG Triangle: The Role of Transnational Knowledge Networks and Epistemic Communities to Govern Complex Systems‘, Asian Journal of Middle Eastern and Islamic Studies, Vol. 12, No. 4 (2018), pp. 484-499.

Lana Ollier is a Fellow in the Geopolitics and Security Unit at Polar Research and Policy Initiative and leads its interview series ‘Polar Matters’. She holds a MSc in Environmental Policy and Regulation from the London School of Economics and a Bachelor’s degree in Political Science from the Freie Universität of Berlin.