What is China’s Interest in the Arctic? 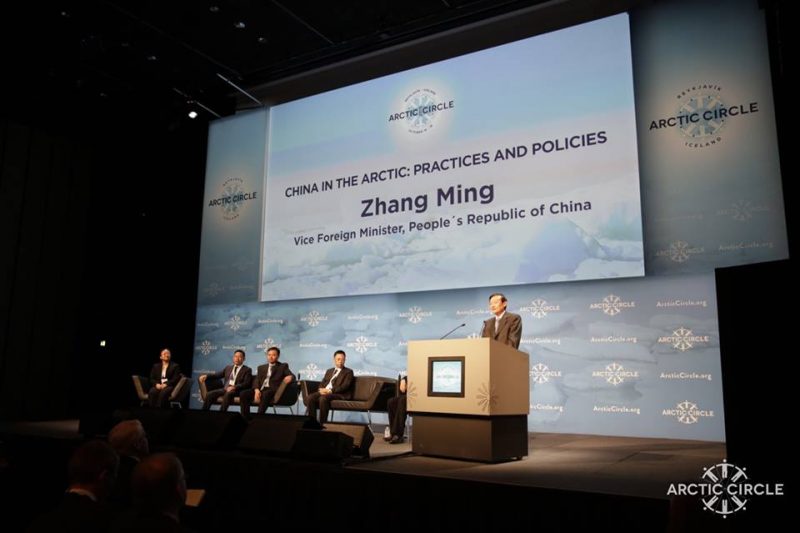 The representatives of the People’s Republic of China at the Arctic Circle Assembly 2015.

China is an observer in the Arctic Council, which may seem a bit odd. After all, we have a country with no territory beyond the Arctic Circle, or a grand history of Arctic exploration, as part of an Arctic governance institution for Arctic countries. The Asia Pacific Economic Co-operation (APEC), for example, does not allow non-Asian Pacific countries to be official observers – and yet, the Arctic Council gives non-Arctic states a seat at the table.

Reasons for China’s observer status are straightforward, namely mutual gain for all states involved. Newspaper headlines abound declaring China seeks economic gains in the Arctic – “China Reveals Plans to Ship Cargo across Canada’s Northwest Passage”[i] or “China Could Be Preparing to Challenge Canada’s Sovereignty over the Northwest Passage.”[ii] However, the gains states seek have to do with both economics and the environment.

China’s interest in making economic gains through Arctic investment is clear. Shipping is clearly a concern. In April 2016, the government of China published a guidebook on Northwest Passage shipping, including navigation charts.[iii] The Northwest Passage takes 7,000 kilometres off a voyage between the Pacific and Atlantic Oceans compared to the Panama Canal. Various ice conditions indicate that the Passage will never be as important as the Canal, but it still can be an important shipping route. Beyond shipping, energy resources in the Arctic abound. An oft-cited statistic is the United States Geological Survey estimates that the Arctic contains 90 billion barrels of oil.[iv] Chinese companies stand to gain by investing in the Arctic, as it is a top ten trading partner for each Arctic country (in fact, the second largest partner for the United States, Canada and Russia). Such investments in the mining and energy industries are taking place in Iceland, Greenland, Russia and beyond. For example, in 2012, the Chinese energy company Sinopec and the Icelandic company Orka Energy announced plans to invest more than $100 million USD in geothermal technology.[v] Chinese land investors have made significant purchases in Iceland for potential development.

An economic interest on the part of Arctic states is tourism, a potential boon to small Arctic communities. In summer 2016, the Crystal Serenity, the largest cruise ship yet to traverse the Northwest Passage, made two stops in remote Canadian communities (Ulukhaktok, Northwest Territories[vi] and Cambridge Bay, Nunavut[vii]) bringing 1,000 passengers and 600 crewmembers to two towns that have a combined population of 1,700 people. Crystal Cruises, the company behind the voyage, is Chinese owned and state media reported on the voyage.[viii] A good number of Chinese tourists have a keen interest in Arctic journeys. According to China’s state media, in 2016, Chinese tourists were the number one group to visit the Franz Josef Land and Novaya Zemlya archipelagos in Russia’s Arctic.[ix] Arctic governments have tried to promote the Arctic in China. Earlier in 2016, the Danish Cultural Center in Beijing held two exhibitions to promote awareness of the Arctic, called “The Weather Diaries” and “Our Arctic Future.”[x]

China’s Arctic interest is also environmental, a fact sometimes overlooked. In most climate models, China’s coastlines will flood in the next century due to the melting of Arctic ice, which will force the relocation of up to 20 million people, not to mention reduce agricultural production.[xi] China has an interest in addressing climate change, but its mixed record promoting climate change mitigation shows it seeks to balance economic gains, as well. As noted by China’s Special Representative on Climate Change Gao Feng at the October 2016 Arctic Circle Assembly, a “number of states have been affected by climate change from the Arctic, including China.”[xii]

China has also sought to contribute to Arctic science. It has had a scientific research station in the Arctic since 2004, namely the Yellow River Station in Svalbard, Norway. The Polar Research Institute of China and the Iceland Centre for Research have a memorandum of understanding to complete joint research, signed in 2012. The two institutes are creating a observatory in Karholl, Iceland, to be called the China-Iceland Joint Aurora Observatory. Beyond this, China has sought to establish its status as a ‘near-Arctic state’, with its northernmost province of Heilongjiang joining the Northern Forum. Although it is not an Arctic state, China clearly has a presence in the Arctic region.

China began attending Arctic Council meetings in 2007, along with such states as India, Japan and South Korea. It was not until 2013 that China became an accredited Council observer, after states developed the first concrete manual to define observer participation.[xiii] The manual includes an explicit direction that observer must respect “Arctic states’ sovereignty.”[xiv] China’s Foreign Minister Wang Yi has clearly stated, “China respects Arctic countries’ sovereignty.”[xv] Chinese officials such as Vice Minister of Foreign Affairs Zhang Ming have said that their goals in the Arctic are to promote “trust and mutual co-operation” while addressing environmental and economic issues.[xvi]

What does China gain by participating in the Arctic Council? A review of Council meeting minutes reveals that its delegations cannot comment in meetings unless allowed by member states. As of March 2016, states have resolved to allow observer comments under a special agenda item at Council meeting; yet, the ability of observers to comment in meetings is not as great as states. China does not sponsor any Council projects, although that might change in the future.[xvii] On the environmental front, China gains in that it is able to participate in Arctic Council working group meetings, giving it access to up-to-date environmental research undertaken by the Arctic states, as well as an opportunity to tout its own scientific contributions. For example, the Arctic Council has done extensive work on black carbon pollution, including plans for mitigation, which is a way to address climate change without tackling carbon dioxide emissions.[xviii] Black carbon pollution is the second leading contributor to climate change, behind carbon emissions, and China is one of the world’s largest emitters.

On the environmental front, the Council also holds special closed-door meetings between observers and member states. The Arctic Council does not explicitly address economic issues in its formal mandate, but rather does so informally. If these meetings do not contain high-level discussions of environmental and economic issues in the Arctic, China has a venue to hold such discussions in the future.

China’s interest in the Arctic may seem counter-intuitive, but it is straightforward. It is about addressing climate change while making economic gains. APEC may be closed to outsiders, but the Arctic Council is a venue for China to explore its Arctic interests.[xix]

[xi] R.J. Nicholls, C. Herweijer, and S. Hallegatte, Ranking of the World’s Cities Most Exposed to Coastal Flooding Today and in the Future (Paris, France: Organisation for Economic Co-operation and Development, 2007), 5.

[xviii] For a list of Council documents related to this work, see: https://oaarchive.arctic-council.org/handle/11374/76.