BRICS in the Arctic: Views on the Arctic Circle Assembly Panel, by Sergio Trindade 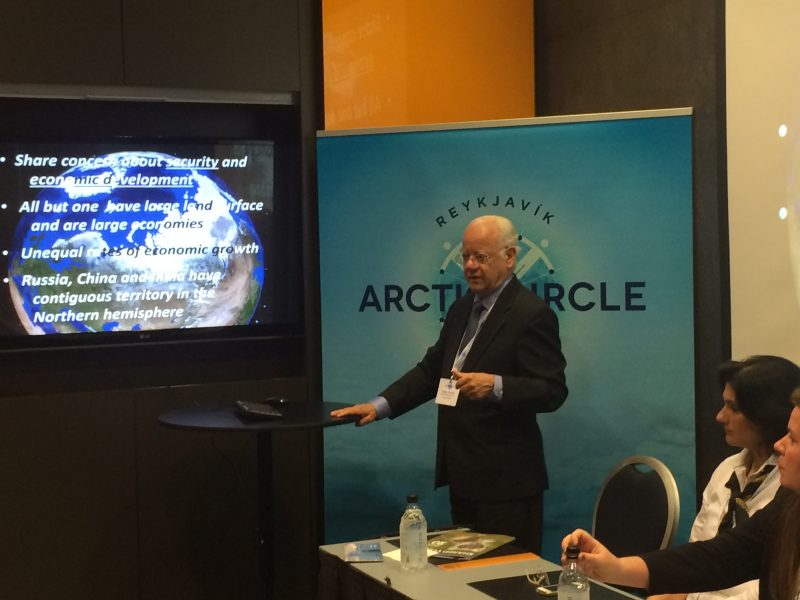 The fourth Arctic Circle Assembly took place in Reykjavík on 7-9 October 2016. More than 2 thousand people attended. This series of annual meetings originated from the then president of Iceland, Ólafur Grimsson, and American journalist Alice Rogoff, in 2013. It was conceived as an open democratic forum where all sorts of ideas on the Arctic could be proposed and discussed.

I participated in them all. At the initial meeting, I made a plenary presentation on climate change and the sustainability of the Arctic. In 2014, I got together panelists from Canada, Finland, France, Russia and the OECD to discuss the metrics of sustainability in the Arctic. The following year, the topic was Brazil and the sustainability of the Arctic and the panelists were Ambassador Flavio Macieira,; Prof. Jeferson Simões, Federal University of Rio Grande do Sul; Prof. Carolina Freire, Federal University of Paraná; Ieda Gomes, an international energy consultant based in the UK, and myself.

This year, on 7 October, the panel focused on emerging opportunities for collaborative initiatives among the Brics in the Arctic. Representatives from Russia and Brazil, and remotely from China (Yao Zhang, Center for Maritime and Polar Studies, Shanghai) and India (R.K. Pachauri, former head of the Intergovernmental Panel on Climate Change) participated. No one from South Africa attended. Prof. Carolina Freire, Professor of Animal Physiology at the University of Paraná, Brazil, Dr Maria Lagutina, Vice-head of World Politics Department at the Saint Petersburg State University, Celma Hellebust, lawyer and Honorary Vice Consul for Brazil in Stavanger, and I, representing Brazil, all attended the panel on our own individual capacities and at our own expense.

The notion of Brics emanated from Jim O’Neil, a banker with Goldman Sachs, who saw similarities among the Bric countries and suggested in 2001 an acronym- Brics – to represent them all. Five years later, the Brics, minus South Africa which joined in 2010, gathered in New York at the time of the session of the General Assembly and formalized the grouping. Their first formal meeting took place in Ekaterinburg, Russia in 2009. The original impetus was to join forces to improve the global economy, which at the time was suffering from a severe recession. In addition, the Brics were intent on reforming the international financing institutions, the so-called Bretton Woods institutions.

The eight formal annual meeting of the Brics is taking place in Goa, India during 15-16 October. Extending the scope of the Brics to develop initiatives in the Arctic is therefore a new idea worthy of consideration, but it is not in the Agenda of the Goa meeting.

THE BRICS ARE LARGE BUT LACK FULL INTERNATIONAL INFLUENCE

The population of the Brics reaches some 3 billion people. Their combined GDP is about 20% of the world at US$ 16 trillion and they hold around US$ 4 trillion in financial reserves. Yet they have not much say in international governance, in spite of the fact that two of them, China and Russia, are permanent members of the Security Council of the United Nations. Consequently, the Brics offers themselves as a geoeconomic and geopolitical alternative to the current global governance paradigm.

The Brics are indeed an alternative to the Bretton-Woods System. They have already created an alternative development bank in the form of the New Development Bank, established in Shanghai in July 2015, already with a regional office in Johannesburg and a Memorandum of Understanding with the Asian Development Bank signed in July 2016. Anther alternative offered by the Brics is a contingent reserve arrangement to facilitate financial transactions between its members.

In short, the Brics share concern about security and economic development. All Brics but South Africa have large land surface and large economies. But, they no longer have similar rates of economic growth they exhibited in the past.

Despite the difficulties, if the Bric are to have a lasting impact on world affairs they must find more common ground and scope for joint initiatives. All Brics are involved individually in work in Antarctica. Hence, the Brics must explore collaborative work in the Arctic!

BRICS COLLABORATION IN THE ARCTIC

Brazil and South Africa could consider joining ongoing projects with China, India and Russia in different domains. In general, the Brics could seek opportunities for joint work in the Arctic in areas of common interest and expertise, in science, technology, environment and commerce.

Scientific cooperation could involve climate change, marine biology, glaciology, geology, and many other areas. Joint initiatives in technology could cover renewable energy, management of permafrost methane and carbon dioxide, safe oil and gas exploration and exploitation, and other interests. On the environmental front, both human and physical environments, cooperation could consider design and implementation of regulatory frameworks, expansion of measures of disaster prevention and remediation, and many more. On trade and investment, the longer annual open ocean time is making the Arctic the latest development frontier. This offers opportunities for collaborative initiatives in fisheries, mining, oil and gas, shipping, shipbuilding, port construction, urban development and tourism.

Sergio C. Trindade is a member of the PRPI – BRICS Engagement Forum Steering Committee. Mr Trindade serves as President of SE2T International, Ltd. He is a Brazilian/American global consultant on sustainable business and a chemical engineer trained also in energy economics and international business. He is a Nobel Peace Prize contributor, as member of the Intergovernmental Panel on Climate Change – IPCC (2007). He holds a PhD, ChE, MSc, Chemical Engineering, with minors in energy economics, technology management and international business, from the Massachusetts Institute of Technology – MIT. Previously, he served as United Nations Assistant Secretary-General for Science and Technology and as Executive Director, UN Center for Science and Technology for Development (New York), where he created/implemented globally the concept of stakeholders’ dialogues and introduced the cluster management approach.