Takeaways from the 11th Arctic Council Ministerial Meeting in Rovaniemi 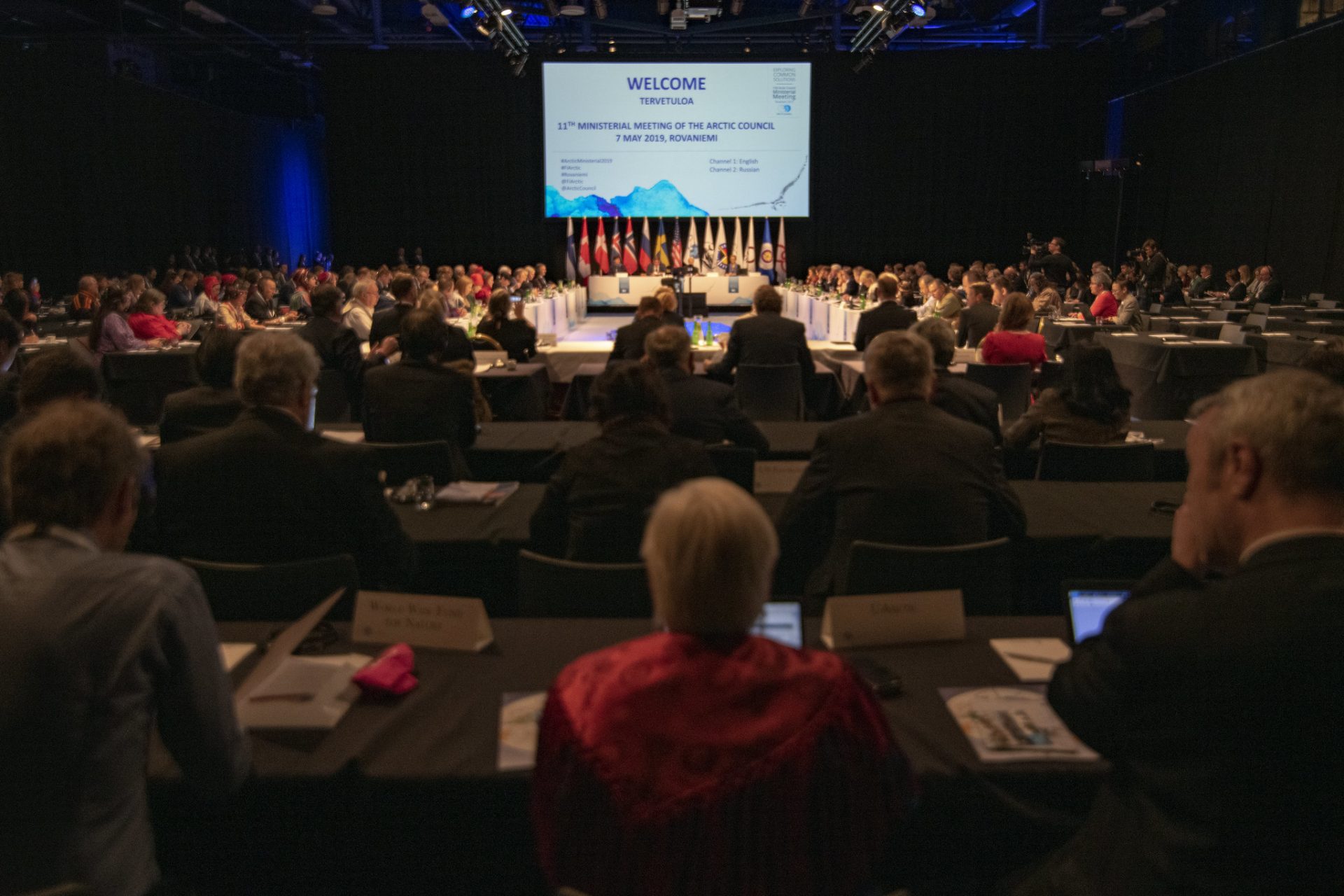 Can the Arctic Council survive the Trump Administration? The Arctic Council held its biennial Ministerial Meeting on 7 May 2019 in Rovaniemi, Finland. At Ministerial Meetings, the chairmanship of the Council officially rotates, while top government officials review progress and create a joint declaration. It is usually a collegial event, with Council members stressing their common interests, shared goals and collective vision. This time, the Arctic Council emerges as a weakened body – more political, less collegial, and marked by uncertainty. The reason is clear – the behaviour of the United States.

A goal of the Ministerial Meeting was to produce a joint declaration, as every other Ministerial Meeting accomplished. As was widely reported in major publications, the United States refused to sign a declaration that discussed climate change. The other Arctic Council members had a choice: they could “water down climate change sentences” or have no declaration. The compromise was a “joint statement” that saw members reaffirm their collective “commitment to maintain peace, stability and constructive co-operation in the Arctic” without mentioning climate change. The Finnish chair released a separate statement that appeared to be an amended version of what would have been the declaration. It noted, “A majority of us regarded climate change as a fundamental challenge facing the Arctic and acknowledged the urgent need to take mitigation and adaptation actions and to strengthen resilience.”

States were coy as to which state nixed the declaration, but the Inuit Circumpolar Council named the United States as the inhibitor. Permanent participants, such as the Arctic Athabaskan Council, criticised the turn of events. The United States downplayed the significance of a statement versus a declaration and shifted blame to those states unwilling to compromise more.

Yet, the move is unsurprising in other ways. The Secretary of State that signed the Fairbanks Declaration was Rex Tillerson; this time around, Mike Pompeo represented the United States. There are reports the Trump Administration is preparing an “internal working group” to “counter the scientific consensus that climate change represents a major threat to the United States and the globe.” Signing a declaration supporting climate change could create a contradiction in policy.

Rovaniemi was the first Arctic Council Ministerial Meeting that failed to produce a declaration. Never was the event so political, with clear dividing lines and tensions. The failure to reach consensus on climate change is a major failure of the Arctic Council, presenting a challenge that could reverberate for years to come.

Mike Pompeo delivered a speech in Rovaniemi on 6 May that directly criticised China’s Arctic policy.  He said, “China has observer status in the Arctic Council, but that status is contingent upon its respect for the sovereign rights of Arctic states.” He said, “Those who violate those rules should lose their rights to participate in that marketplace.” He went on, “Beijing claims to be a ‘Near-Arctic State’, yet the shortest distance between China and the Arctic is 900 miles. There are only Arctic States and Non-Arctic States. No third category exists, and claiming otherwise entitles China to exactly nothing.”

Statements around Council meetings are generally friendly in tone, discussing the need to work together and address environmental issues. Remarks by Canadian Conservative Party minister Leona Aglukkaq at the 2015 Ministerial Meeting in Iqaluit, for example, did not criticise any government and mentioned climate change several times, touting the spirit of co-operation and the importance of the perspectives of Indigenous peoples repeatedly. Pompeo’s speech directly criticised regional partners and asserted United States sovereignty multiple times.

Pompeo clearly implied that China is doing something in the Arctic it should not do. Yet, China does not threaten state sovereignty in the Arctic. So far, it has complied with international law, invested legitimately with regional partners, participated in the Arctic Council according to the rules and contributed to Arctic research. Everything it has done has been in collaboration with Arctic states. China lays no claim to Arctic territory. It is not in the wrong for investing in the region or building icebreakers.

His statement drew criticism for being unnecessarily confrontational and ignoring the pressing issue of climate change by framing it in a positive light. The rebuke of China was surprising given that the United States and China are currently engaged in trade negotiations that that aim to reduce tariffs. Pompeo also criticised Canada’s stance on the Northwest Passage, which commentators saw as a revival of a “long standing feud.”

Arctic Council meetings are generally friendly affairs. Pompeo’s comments emphasised sovereignty and competition, themes that are antithetical to the spirit of regional co-operation.

Where the Council goes from here is uncertain. The meeting was routine in other ways. The International Maritime Organization became a new observer. The chair touted a new working relationship with the World Meteorological Organization. The Arctic Economic Council signed a memorandum of understanding with the Arctic Council, pledging to “consider organizing joint activities.” Yet, the behavior of the United States raises questions.

Will the United States continue to support work on climate change in the Arctic Council as it has done to this point? Will it inhibit the environmental focus of the Council? Will it intensify economic work in the institution? Will it step back from governance with a renewed emphasis on sovereignty and security? Will it close the institution to non-Arctic players? After previous Ministerial Meetings, the future of the Arctic Council and the spirit of co-operation were clear. Can the Arctic Council survive the Trump Administration? At this time, the Council looks uncertain, with one of its founding members charting a different path forward.