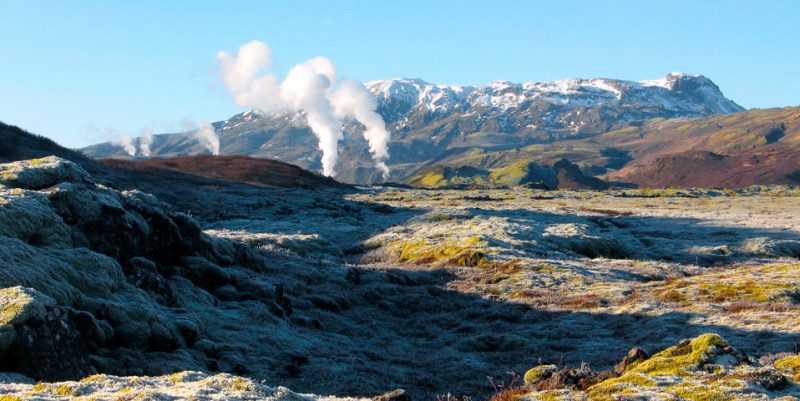 When one thinks of the Arctic, certain words spring to mind: cold, dark and remote. For settlements in the far north, these characteristics of everyday life result in a basic need for heat and light, and present serious questions of how to get it there. Shipping in diesel at great expense is a familiar energy solution for countless Arctic communities today, but look to Iceland, and we find a model for transitioning to an affordable, clean and secure energy supply that sets an example to the Arctic and the world.

Iceland in 1960: 175,000 people living on 100,000 km2 of volcanic rock in the North Atlantic and reliant on foreign oil imports for 72% of their energy supply. Fast-forward to today, we find an economy that has grown tremendously, a population double that of 1960 and the second highest energy use per capita in the world. Despite this, foreign oil imports are down to a fraction of what they were, and 99% of heat and electricity is sourced from the abundant renewable geothermal and hydropower on the island. Not only are these resources cheap, with electricity costs in Iceland almost half of the UK’s, they are also significantly more stable than wind and solar and offer much greater ability to respond to spikes in demand.

With so much cheap and renewable energy at hand, opportunities for Icelandic industry are plentiful. ‘Green’ heavy industry, particularly aluminium smelting, which accounts for almost seven tenths of the island’s energy demand has grown a great deal in the past few decades. This ability to offer globally competitive services and products, from ferrosilicon to data centres, without the associated high emissions gives Iceland an edge in the market.

After decades of developing geothermal technology, Iceland have placed themselves as leaders in the field and export their knowledge globally. Maintaining this world leading status, Reykjavik continues to push boundaries of geothermal technology. In recent weeks, the drills at the Iceland Deep Drilling Project have created the deepest hole in the country. As they continue down to 5km below the surface, they are searching out an area of supercritical liquid that can hold a great deal more energy than steam. If the team can find a way to tap this heat cost effectively, we could be looking at a new era of super-efficient geothermal in Iceland – a technology that could make many new areas on the planet viable for geothermal exploration.

Exporting the products and knowledge resulting from Iceland’s incredible energy transition is one thing, but exporting the energy itself is another. In October of last year, Britain and Iceland agreed to investigate the possibility of an interconnector between the two countries. Whilst laying the world’s longest interconnector under the ocean is no small feat, the benefits for both parties could be significant. The interconnector, with a 5TWh/yr capacity, would carry enough cheap and clean electricity to power half the homes in Scotland. The project can provide the UK with secure, green and affordable electricity, delivering on all three primary pillars of the government’s energy strategy. However, in a recent interview with Reuters, the head of Icelandic utilities Landsvirkjun revealed that Brexit was adding uncertainty to the 2027 operation date. To ensure the success of the project and the realisation of benefits on all sides, the Icelandic government will be seeking assurances from the British similar to those given to EDF for Hinkley Point C.

With an impressive record on electricity and heat, the Icelandic government is now turning its attention to the final emissions hurdle: fossil fuels for transport and fisheries. Having set an ambitious 20% target for renewable transport by 2020, but currently only delivering 0.35%, there remains a lot of work to be done. Whilst economic incentives are the primary policy instrument in play to encourage greener transport, it is clear that they are not delivering at the pace required to meet the goals. As a founding member of the International Partnership for Hydrogen Economy, Iceland is hoping that hydrogen fuel cells can provide a solution for its buses and fishing boats, but serious questions remain about the scalability of this technology. As Iceland expands its operations as an aviation hub with no major oil-free solutions on the table for that industry, it is clear that fossil fuels will remain an important part of the Icelandic economy for decades to come.

It’s easy to sing environmental praise of Iceland’s energy transition, but the reality is that it provides great economic opportunity for the country. As the global community begins to address the next challenges to ween ourselves off fossil fuels entirely, Iceland will remain front and centre. Whilst not everywhere is blessed with the mid-Atlantic ridge’s geothermal hotspot, Iceland demonstrates the opportunities that can be afforded by utilising the resources that are so often right in front of our eyes.