What is Japan’s Arctic Interest? 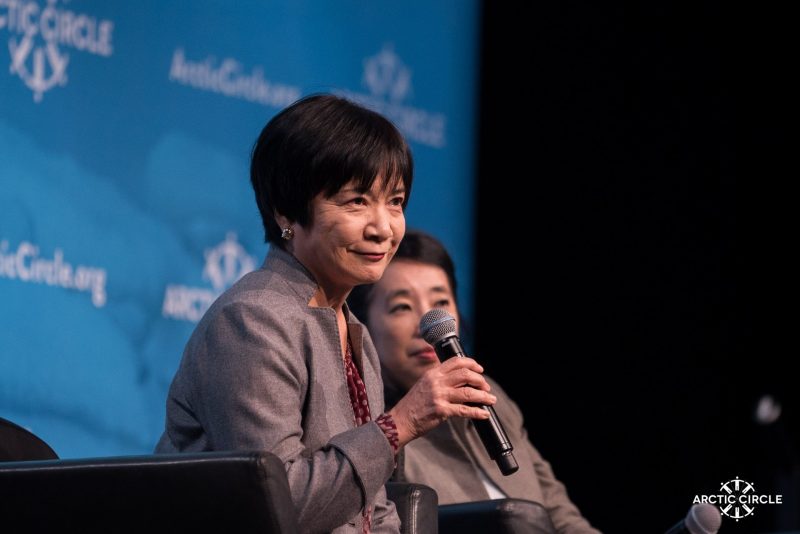 Japan’s special ambassador in charge of Arctic affairs Kazuko Shiraishi at the Arctic Circle Assembly, in Reykjavik. Photo via Arcticcircle.org

What does Shiraishi mean when she speaks of Japan’s Arctic research? Japan is home to the National Institute of Polar Research, an environmental initiative funded by several universities.[2] It operates the Japanese Arctic Station at Ny-Ålesund in Svalbard, Norway. The institute completes research on evolution, ecosystems, climate monitoring and atmospheric conditions, among many other areas. The research station monitors Arctic pollution and studies environmental protection. Clearly, Japan, as a contributor to science in a broad sense, seeks to contribute to science in the Arctic region.

Much of Japan’s Arctic research centres on climate change, which is a major issue for Japan and every country. Climate change threatens to cost the Japanese economy $176 billion per year by 2100.[3] It will reduce crop yields across the board and 1.3 million citizens will be at risk of flooding.[4] The Japanese government has pledged to cut greenhouse gas emissions more than 25 percent compared to 2005 levels in the next 15 years,[5] though many experts call for even greater action. Japan is also a world leader in the development of green technology, particularly hybrid and electric cars. Climate change emanating from the Arctic is a major issue for Japanese leadership.

The government of Japan specifically mentions that Arctic climate change, as well as sustainable development, is a profound national issue in a policy brief given to PRPI directors by Kazuko Shiraishi at the 2016 Arctic Circle Assembly. It also notes scientific co-operation, in that, “For more than half a century since the 1950s, Japan has carried out observations of and research on the Arctic.” It promises the establishment of new scientific research by Japan, as well as contributions to the Arctic Council.

Climate change in the Arctic also creates economic opportunity the Japanese government is keen to exploit. The Yamal project is a new Russian gas plant under construction on the Yamal Peninsula, in the Arctic region. It is owned by Russia, French and Chinese corporations.[6] The project will cost more than $27 billion USD and will be responsible for more than 16.5 million tons of natural gas per year.[7] Japan comes into the picture in that a Japanese construction company is building the project. After Western sanctions in 2014, the project fell behind schedule. Japan’s Bank for International Co-operation came to the rescue by agreeing to contribute $400 million USD.[8] It also agreed in principle to finance a second Russia natural gas development, as well.[9]

Why is Japan so interested in this project? Japan is the largest importer of liquefied natural gas in the world.[10] The investment helps ensure Japan has access to natural gas, from a source close to home.       A major way to deliver the gas to Japan is via the Northern Sea Route, from Yamal and beyond. The Northern Sea Route is roughly two thirds of the distance between East Asia and Europe versus the Southern Sea Route.

These facts are not to say that the Arctic economic future is without risks. The previously mentioned policy brief obtained by PRPI says, “The Arctic Sea Route is not ready yet for safe and reliable use” and “development in this area of extreme cold and sea ice is with difficulties, requiring advanced development technology.” There are difficulties, but there is a potential for increased economic activity in the Arctic region.

Japan has attended Arctic Council meetings for nearly a decade and has been an accredited observer since 2013. Its Council activity is low-key. It rarely provides comments in Council meetings and does not currently sponsor any Council projects.[11] However, it can contribute to working group activities, access the wealth of the Council’s research and participate in special meetings for Council observers. Participation in the Council helps build international trust and status as a country able to contribute to Arctic research, environmental protection and economic activity.[12]

Japan possesses northern territory and is a member of the Northern Forum via the northern Hokkaido prefecture. The Northern Forum is the international institution consisting of sub-national Arctic governments, carrying out research and projects related to environmental protection and human security. In past years, the Northern Forum has been a reasonably ineffective institution, although that might change in the future.

Japan’s Arctic interest is similar to China and other non-Arctic countries – the region contains economic wealth worth exploiting, as well as keys to deal with global climate change. Japan’s Arctic special ambassador in charge of Arctic affairs Kazuko Shiraishi has confirmed this interest. These goals are often at odds and it is unclear how to balance tensions.