Snow Crab Saga: A Story that Demonstrates the Complexities of Climate Change 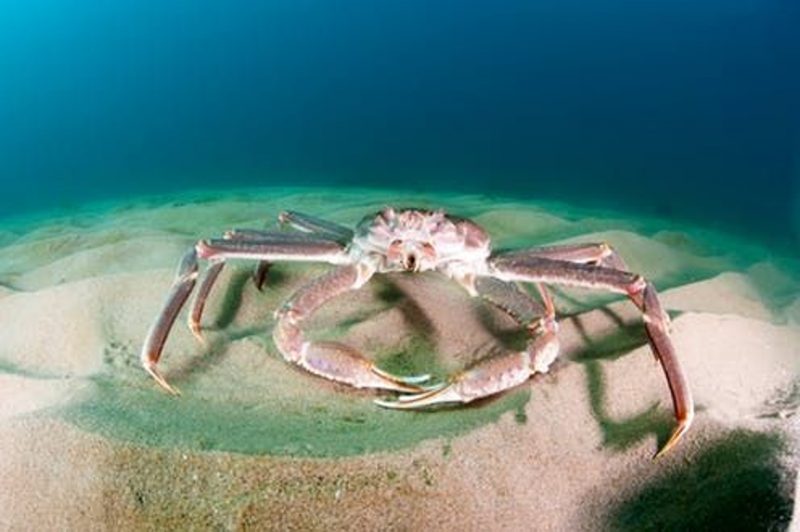 There’s much more to snow crab than their tasty legs and claws. Especially so in the last few years as these large, cold water Arctic crabs have started showing up in the Barents Sea, where they’ve never been before. The snow crab’s story is a harbinger of climate change complexities on the horizon, and much more.

Until recently, they could only be found in Alaskan, Pacific Russian and Atlantic Canadian waters. But globalisation and growing human access to Arctic waters due to climate change have expanded the crab’s reach: increased marine traffic has seen the species successfully hitch a ride to the Barents from elsewhere in the Arctic. The new territory has proved quite amenable, and they are thriving. Crabs still at home in their native habitats, however, have been weathering climate change less successfully due to climate changes and warming waters.

Climate change is also making it easier to fish the crabs, with more of the Barents ice-free for longer. And that means humans are benefiting too, because humans adore eating this particular variety of crab. Alaskan crab fishing is so dangerous, risky, but potentially profitable that it has had its own TV series since 2005: The Deadliest Catch. 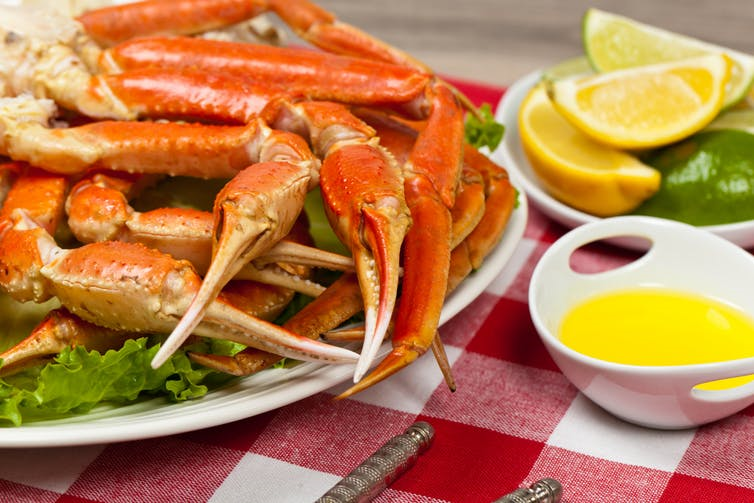 Served up for supper. alisafarov/Shutterstock.com

Given humanity’s voracious appetite for this particular variety of crab, when they started appearing in Russian waters in the Barents Sea in the late 1990s, the Russians and Norwegians agreed to study them to see whether they could make money for them too. They also wanted to know what effects they were having as newcomers to the area’s seabed. The countries now do joint ecosystem surveys each autumn, and have a pretty good idea now that populations are growing very fast – fast enough that some predict that their value in the fishing industry in Norway could overtake cod in terms of value within a decade or two.

The crabs eat pretty much everything, but the net effect on the marine ecosystem’s productivity is still unclear. This is for two reasons. First, baseline science on Arctic seabed conditions still has a lot of unknowns. We can’t be sure what the changes are, because we don’t really know what has always been there. Second, the way the crabs dig into the seabed can release food for other species.

The ecosystem is definitely changing, but we don’t really know if that’s going to be good or bad for the planet. It’s at times like these that we like to invoke the precautionary principle, which suggests that we should avoid taking risks when consequences are highly uncertain but may include permanent losses or other unacceptable damages to present or future generations. In this case, that means stopping the spread of the crab until we know more. That way we can avoid making irreversible choices.

But humans also like to make money, and the global price of snow crab keeps rising. As the crab has expanded west, it has crawled out of Russian waters and into international waters – more than 200 nautical miles from any shore – meaning any nation’s vessels could fish for them. Some EU and Norwegian vessels started doing that around 2012. 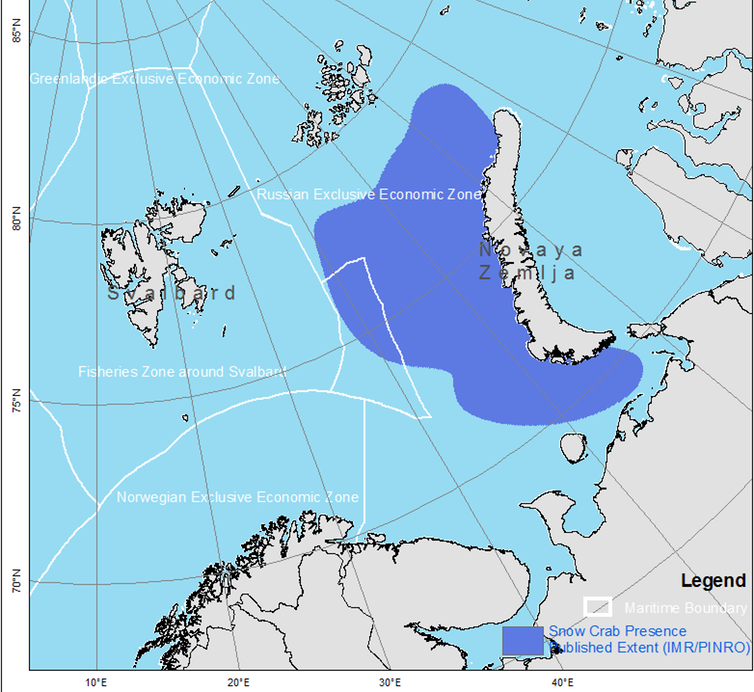 This fishing has an added bonus: it has reduced the population of crabs that remain on the seabed that could continue moving west and changing the existing ecosystems. And so market forces are currently helping implement the precautionary principle, which is unusual to say the least.

Whose Crabs are They, Anyway?

The crab’s advance into international waters meant anyone might fish crab and make money. But in 2015, Norway and Russia found common ground and changed the rules in their favour.

They used a loophole in international law to categorise the crab as seabed resource, basically equivalent to a mineral or oil, instead of a fishing resource. Reclassifying the crab means that the Russians and Norwegians can kick out vessels from other countries and keep the profits from the crab. This is because continental shelves define mineral resource boundaries, while distances to shore define fisheries boundaries. The Barents’ continental shelves extend beyond the 200 nautical mile fishing boundaries, and so this identity change benefits the Norwegians and the Russians.

The arrest of a foreign crab fishing vessel in these Barents international waters spawned a lawsuit in Norway that has made it to the highest state court, which recently held up Norway’s actions. The case has potential to proceed to European courts. 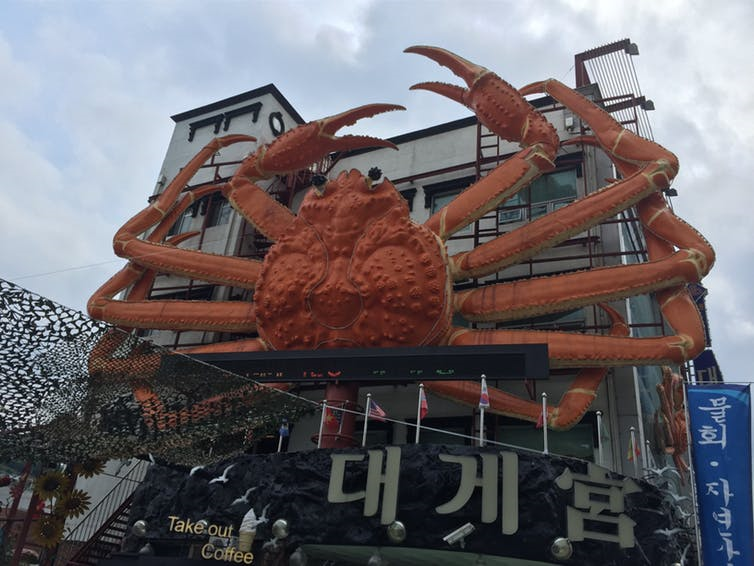 But that’s not even the biggest controversy. The Norwegian continental shelf also extends to Svalbard. Due to an international treaty from 1920, anyone who wants to engage in commercial or scientific opportunities on Svalbard may do so.

This has led to a complementary set of international treaties which help govern fishing in the area around the archipelago. When international vessels were kicked out of the international waters, some moved to the Svalbard zone, gaining international permits to fish snow crab there. But Norway arrested one of these boats, too. EU states continue to issue licenses, against Norway’s insistence that they cease. The question at the bottom line is – do the continental shelf rules trump the 1920 Svalbard rules, or vice-versa?

This time, it is not just about profit from crabs. The stakes are high. The dispute is set to resolve broader questions about the seabed under the Svalbard zone. As valuable as the crabs may be, oil, gas and other seabed resources may be many times more valuable. Norway and the EU are at an impasse: legal arguments will have to decide whether Norway has the right to other seabed mineral and oil resources in the zone, or whether the resources fall under the open commercial access rules for Svalbard.

The consequences should also be expected to extend far beyond the Barents. Because climate change is making it more and more common for species to move in and out of legal jurisdictions. This will require new ways of negotiating shared resources amongst interested local and global parties. And these decisions will then impact the ecological changes brought by the species, as well as who profits.