Arctic Sea Ice Extent is the Second Lowest on Record, but What of Antarctica? 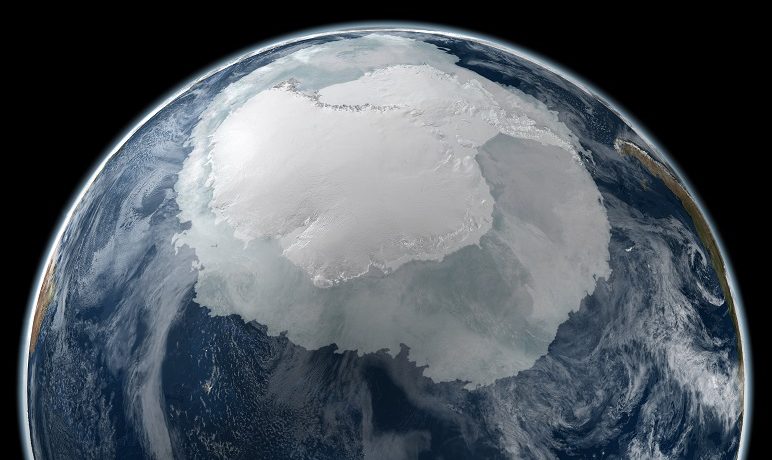 View of the Earth on 21 September 2005 with the full Antarctic region visible. Image via NASA.

The paradoxical behaviour of sea ice in Antarctica and the Arctic is poorly understood. Here is a brief overview of the paradox, the leading theories to explain this, and a homage to what surprises this year’s observations may spring.

Sea ice extent is defined as the area of ocean with at least 15% ice. The extent of Arctic sea ice at the end of the summer melt season is generally taken as a sensitive indicator of global climate change. Like much in climate science, little can be inferred from individual annual measurements. Instead, long-term trends and patterns must be studied to infer the effect of climate change upon sea ice extent.

Individual climate events, such as strong seasonal winds or cool summers, can influence yearly sea ice extent, distorting the long-term trend. One such example was the extremely low extent of 2007, which was cited to be due to a combination of low atmospheric pressure and seasonal wind patterns (NSIDC 2007).

Investigation of this long-term trend of Arctic sea ice extent unravels a story of melt and decay. As much as 50% of summer Arctic ice extent has been lost since the 1950s, at rates approaching 72,000 km² per year (NSIDC 2007). Furthermore, all of the post-2010 annual sea ice extents have been below the average for the period 1980-2010. Because of this, many researchers now believe that the Arctic ocean may be “ice-free” within decades. 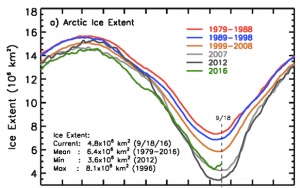 Like the Arctic Ocean, the Southern Ocean, which surrounds Antarctica, experiences seasonal fluctuations in sea ice extent. Unlike the Arctic Ocean, the Southern Ocean is effectively ice free throughout the summer months. During this period, sea ice is essentially restricted to areas very close to the Antarctic landmass. During the winter months, sea ice grows northwards, reaching a maximum in late-September or early-October, with a maximum extent larger than the size of the Antarctic continent. 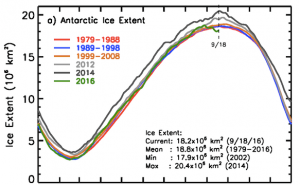 As the graph above shows, in the period since the 1970’s, during which time Arctic ice has suffered rapid losses in extent and thickness, Antarctic sea ice has been relatively stable. Indeed, in recent years, Antarctic sea ice extent has actually grown in size. Given the global warming experienced in this period, this observation is, to say the least, counter-intuitive.

So why is Antarctic Sea Ice Extent increasing?

The reason for the paradox between global temperature rises and increasing Antarctic sea ice extent is something of a mystery. However, a number of hypotheses have been proposed to explain these observations.

Depletion of the ozone layer above the South Pole, widely termed “the ozone hole” has contributed to locally cooling stratospheric temperatures in recent decades. Ozone is itself a greenhouse gas; thus, reductions in the concentration of ozone create a cooling effect as less heat is trapped within the Earth’s atmosphere.

Alongside other climatic influences, stratospheric cooling leads to changes in tropospheric zonal winds. These variations can modify the intensity and mode of the Antarctic oscillation, a belt of westerly winds which encircle Antarctica. If these winds intensify, thermal isolation of the Antarctic continent ensues. Essentially, this means that Antarctica is, to an extent, cut off from the global climate system. Therefore, whilst the rest of the Earth’s oceans warms, the Southern Ocean can be cut off from this warming. This allows strong katabatic¹ winds blowing off the Antarctic Ice Sheet to cool Southern Ocean waters and form sea ice.

Recent observations suggest that recently-formed ice is pushed north by katabatic winds off the Antarctic continent during the early Autumn. This ice builds up into an ‘ice shield’ when further ice is thrust atop it from the South. This ‘ice shield’ acts like a wall to protect sea ice forming regions to the South, thus encouraging sea ice formation (Nghiem, et al. 2016).

Unlike Arctic sea ice, which has been in rapid decline in recent decades, Antarctic sea ice has been growing in extent. This is caused by a unique set of circumstances, primarily a consequence of Antarctica’s location, surrounded by oceans at the South Pole. A number of hypotheses have been suggested as to why this paradoxical phenomenon exists. It is most likely that the exact cause involves some degree of influence from each hypothesis.

Many have delightfully indulged in these observations, purporting to show they are evidence that climate change is not occurring. What these observations do is highlight the inherent chaotic nature of the Earth, particularly its climate system. Early reports suggest that the Antarctic sea ice extent for 2016 may set a new record low, further highlighting this fact. All told, Antarctic sea ice is a complex, dynamic and poorly understood entity. More must be done to thoroughly understand its connection to the Earth’s climate system as a whole.

Lewis Holden serves as an Associate within the Natural Environment Unit at Polar Research and Policy Initiative. Lewis is currently completing an MSc in Climate Change at University College London. He also holds a Geology degree from Imperial College London. Lewis’s interests in the Polar Regions lie within the realm of the natural environment, with an emphasis on climate change. With a background in Earth Science, Lewis is also interested in Arctic permafrost, Arctic oil exploration and climate modelling.