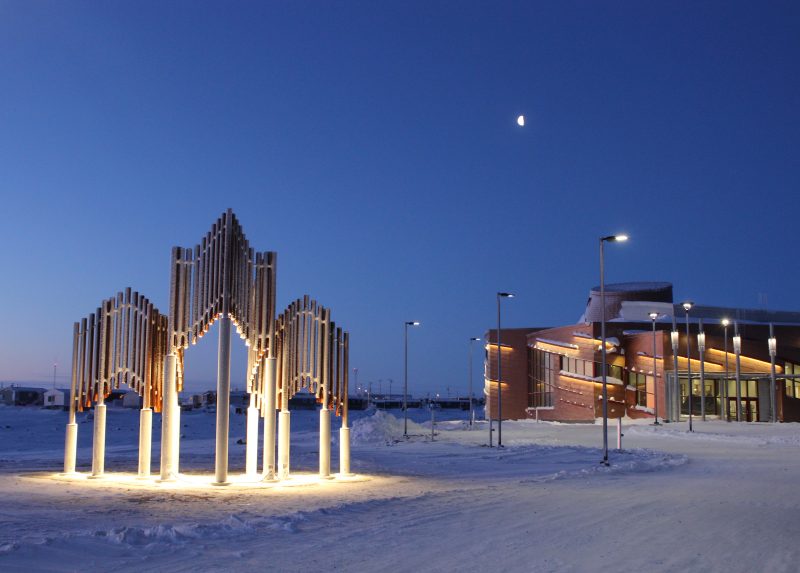 For those who are not familiar with Polar Knowledge Canada, or POLAR, can you tell us a little bit about the organisation and your role?

Polar Knowledge Canada, or POLAR, a new federal agency established in 2015, advances knowledge of the Canadian Arctic and strengthens Canadian leadership in polar science and technology. POLAR has a unique role to advance our collective understanding of polar environments by mobilising current knowledge produced by others, in a meaningful and accessible way, to address the gaps and concerns of Northern communities.

Our headquarters will be in Cambridge Bay, Nunavut at the Canadian High Arctic Research Station campus, where approximately 20 of our personnel are now based.

My own role, as Director of Knowledge Management and Engagement at Polar Knowledge Canada, is to lead a team based in both Cambridge Bay and Ottawa that works to:

Priorities for the next 5-year period, beginning in 2020-21, will be established by POLAR’s Board of Directors, with input through an open Call for Input and direct engagement with Northern partners and stakeholders.

The knowledge gained through scientific and technological research and training will support greater sustainable use of the Arctic’s land and natural resources.

The Canadian High Arctic Research Station campus, or CHARS, is set to officially open soon. Can you tell us about the type of research that will take place and how the scientists and researchers will collaborate with local Inuit?

The CHARS campus in Cambridge Bay will be a world-class innovative hub for science and technology in Canada’s North and a major node in the network of national and international research infrastructure across the circumpolar North.

The CHARS campus consists of a Main Research Building, a Field and Maintenance Building and triplex accommodation units that can accommodate up to 48 visiting researchers. The research campus will provide a broad range of services, including a technology development centre, mechanical and electrical workshops, a knowledge-sharing centre, and advanced laboratories. The CHARS campus will have office and laboratory space to host visitors. POLAR staff can provide general logistical support as well as equipment for scientists going into the field and working in the research labs.

The CHARS campus will help Polar Knowledge Canada strengthen the network of research infrastructure and research activity across the North and promote the application of scientific research and results to address multidisciplinary issues. It will be a very rich environment for creating the new knowledge that’s needed in the rapidly changing Arctic- to address the issues that Northerners have identified as important.

Here are some examples of the kind of POLAR-supported research that has been undertaken so far based in Cambridge Bay:

The results of the research affects Northerners directly, and when more Indigenous people are engaged in research, knowledge of the Arctic will benefit. POLAR fosters an environment where more Northerners are involved in research at all levels, asking the questions, developing and doing research projects, collaborating with scientists from around the world — and finding the answers they need.

Canada is participating in research exchange programs with Finland, Sweden, Denmark and now Iceland. What are the goals and expected outcomes of these exchanges?

These three programs are designed to strengthen future Canadian-Swedish, Canadian-Danish and Canadian-Icelandic Arctic research links through:

2) The Canada-Finland Bioenergy Researcher Exchange Program is designed to enhance science and technology knowledge, and strengthen Canadian-Finnish research links by:

How does Polar Knowledge Canada strive to make research findings accessible to both Northerners and the Canadian population at large?

Good relations are crucial to successful operations in the North: respect, and good two-way communication are fundamentally important. Polar Knowledge Canada, or POLAR, makes its own research findings available through various methods including public meetings, posters, local media, social media, and informal conversations. Listening, finding out what local research priorities are, and getting feedback are all part of this. POLAR is constantly working to refine and expand its communications in this regard

POLAR requires the research projects it funds to share their results with the communities in which they work, and encourages:

POLAR communicates relevant news, events, opportunities, and research to the Canadian public and polar research community via its website, social media and the Polar Blog, which is a partnership with Canadian Geographic Magazine.

POLAR’s involvement is not limited to the Arctic alone, it also includes the Antarctic. Can you tell us about POLAR’s Antarctic initiatives?

POLAR serves as Canada’s adhering body to the Scientific Committee on Antarctic Research, which initiates, develops and coordinates high quality international scientific research in the Antarctic region. POLAR is the national contact point and an Observer to the Council of Managers of National Antarctic Programs (COMNAP). Polar Knowledge Canada also serves on the Canadian delegation for Antarctic Treaty Consultative Meetings (ATCM), in which Canada is a Non-Consultative Party.

The work of Polar Knowledge Canada and the development of the new Arctic Policy Framework is suggestive of increased and more informed engagements with the Polar Regions. Do you see this continuing in the future, and what are the key issues that need to be addressed to promote greater cohesion between state and society?

Yes, I see increased and more informed engagements. The Polar Regions – the Arctic and the Antarctic – are on research and policy radars around the world because they play a critical role in the global environment, both as barometers of change and drivers of change. A major distinction between the two is, of course, that, unlike Antarctica, people live in the Arctic, and have for millennia. It is a place not only of rapid environmental change, but also of social, economic and geopolitical change. In order to support resilient Northern communities, government institutions need to collaborate with and be receptive to and supportive of solutions proposed by communities, each of which has the best knowledge of the issues it faces and the potential solutions. That is the underlying principle behind POLAR’s engagement with northern communities, and of the Arctic Policy Framework that the Government of Canada is in the process of co-developing with territorial, provincial and Indigenous partners. Our Northern partners have made it clear that they need to be more involved in the research that is happening in the Arctic, a position that Polar Knowledge Canada supports.