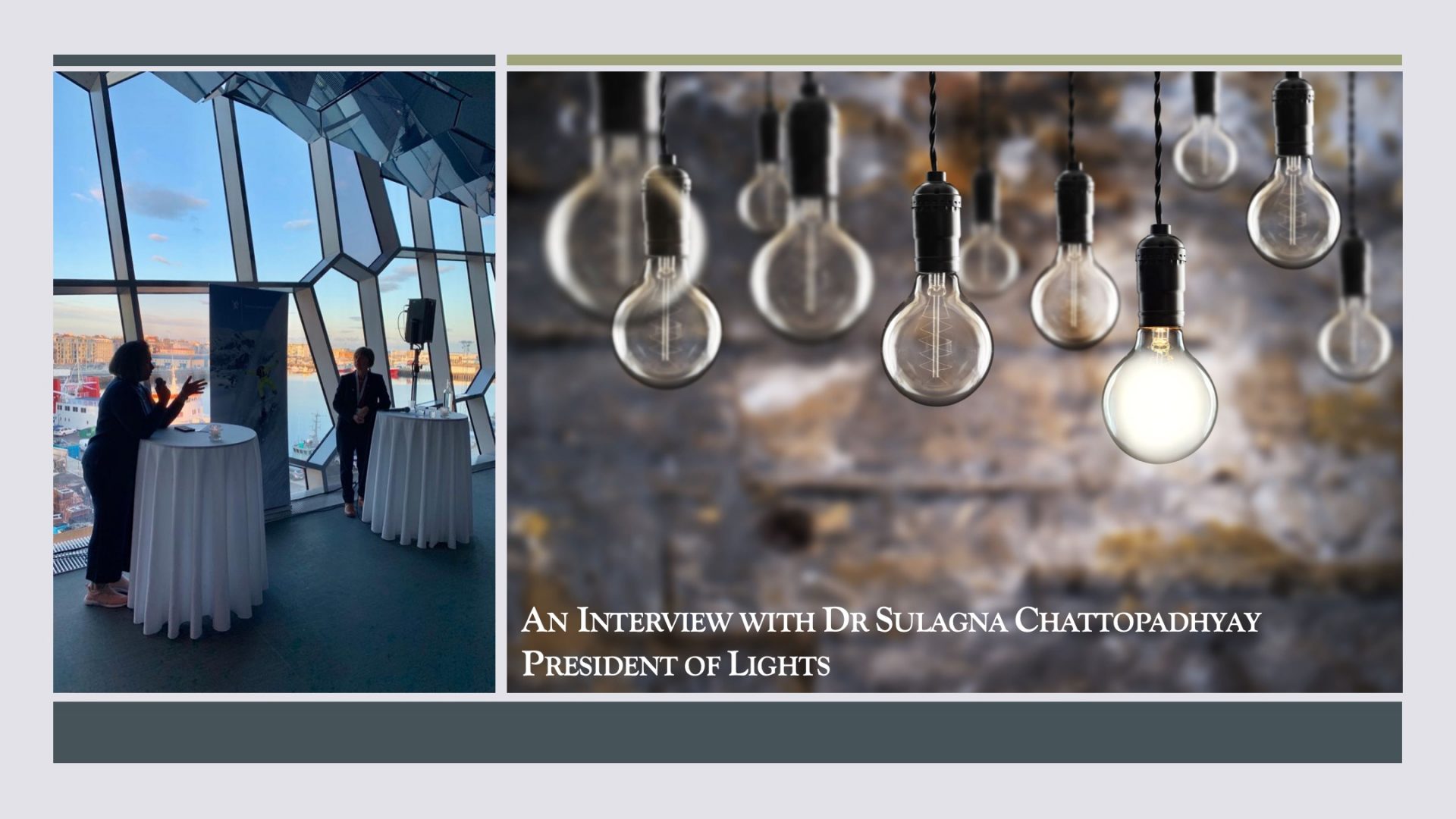 Hriday Sarma, India Fellow at Polar Research and Policy Initiative (PRPI), recently spoke to Dr Sulagna Chattopadhyay, President of Learning in Geography, Humanities, Technology and Science (LIGHTS), a New Delhi-based non-profit that has been working on advocacy and research related to India’s engagement with the Polar Regions. Dr Chattopadhyay is Founder Editor of Geography and You magazine since its inception in 2001, and has edited 12 books and numerous reports. She has organised Earth Day Celebrations on behalf of India’s Ministry of Earth Sciences since 2011. The interview falls within PRPI’s Polar Matters interview series and India series.

In recent years, India has played an increasingly prominent role on the world stage – and this has also been evident in the Polar Regions. In July 2018, India renamed the National Centre for Antarctic and Ocean Research (NCAOR) — since 1998, charged with conducting expeditions to the country’s base stations in Antarctica — as the National Centre for Polar and Ocean Research, signifying the greater importance the country places on the Arctic as well. It also initiated talks with Canada and Russia to establish new observation systems in the Arctic. This year, it got re-elected as an observer to the Arctic Council, and is now actively participating in wide-ranging  activities of relevance, including research collaborations, steps for climate control on its home front, and so on.

Please tell us about the initial trigger that drove you and your colleagues at LIGHTS to organise ‘Science & Geopolitics of Arctic and Antarctic’ (SaGHAA) events since 2011? We see that LIGHTS held the first SaGHAA event back in 2011, when the Arctic did not feature as prominently in popular or academic discourse in the country as is the case today?

For me, the trigger was a single image. An endless mass of white fragmented ice, deep dark waters, a radiant blue horizon and the stern of a dark red ship peeking at the corner. Dr P C Pandey, the first Director of what was formerly known as National Centre for Antarctica and Ocean Research (now the National Centre for Polar and Ocean Research), holding this one photograph, recounted his journey to Maitri in 2004, and I stood mesmerised. Our people were going to Antarctic each year — summer and winter? It was unbelievable.

Soon after the first Arctic station, Himadri was also established (2008). There was immense excitement about it – from the scientists to the ministerial offices. That was the backdrop in which we conceived this exclusive, one-of-a-kind platform for the Polar Regions that would not only talk about the sciences but also involve geopolitics to assist India is building robust policies dedicated to the poles. The mandate of SaGHAA was to not only involve policy makers and scientists but to also reach out to civil society and open our arms to selected research scholars from various universities to interest them in future polar research endeavours.

The augmentation of India’s scientific capacity was and is important to make an indelible mark, proving to the world that we had and have the capacity to engage in cutting-edge science. We definitely needed to gain an understanding of the global changes that are likely to affect our populous coasts, our icy mountains and more – not to mention the need to be in the reckoning in these distant realms. Yet, science does not happen in isolation, and as far as the Polar Regions are concerned, an understanding of science is the ticket to an exclusive and close-knit club. India’s science-driven entry into the Poles was, thus, an achievement indeed. And that achievement needed to be celebrated. By contributing to the common global depository of scientific knowledge in the Arctic and the Antarctic, moreover, India is investing in the good of mankind – as both a responsible and a responsive nation.

The Himalayan component in SaGHAA was added later (2015), when NCPOR began conceptualising its scientific forage into the Chandra Basin and proceeded to establish Himansh in 2016.

Could you highlight some successes that this event series and the overall endeavour has yielded over the years?  By success, I mean anything noteworthy that you feel is worth sharing with the global community connected to polar related matter.

The strength of SaGHAA lies in what we call the ‘SaGHAA people’ – the high-level experts. Every organisation in India working on anything that is even distantly ‘Polar’ makes it a point to be with us during every event. Significantly, heads of scientific establishments and policy bodies assiduously attend, contributing emphatically and freely to the discourse. The first success of SaGHAA is, therefore, its stature that not only draws from its myriad stakeholders providing a body of recommendations that serves as an illuminated path for policy makers.

Second, SaGHAA interfaces two extremely diverse subject areas into one. Scientists, for instance, can unwittingly project their subject bias onto the domain, skewing India’s role in the Polar Regions. Geopoliticians on the other hand are fairly disinterested in science — analysing global relations in relative isolation from the growth trajectories of Polar science. The bringing together of the two is, therefore, unique and unparalleled. There are, as you know, many think-tanks that work either on science or geopolitics of the Polar Regions, but none that forges a relationship between the two. This convergence in SaGHAA – I feel — is imperative to better India’s future endeavours in the Polar Regions.

As the interest in SaGHAA grew, the Norwegian Embassy in India came forward to partner with it in 2014. Several other embassies from various countries also attended the SaGHAA series, inviting experts from their respective countries to engage with Indian scientists and geopoliticians. Many important inter-ministerial polar dialogues were in fact forged in the backdrop of the SaGHAA interactions.

Fourth, SaGHAA is contributing towards escalating multi-disciplinary research on Polar Regions with an increasing engagement of students from the social sciences background as well. We are confident that it will not be long before Indian students would work on issues related to Arctic’s indigenous communities, looking for clues to help communities in India’s High Mountains – the Himalayas.

In a preliminary study run by SaGHAA, India’s academic strength in Polar studies shows a steady increase from 1960-2018. The research is in progress and more nuanced results are awaited, to be presented as the Polar Academic Vision Report in the forthcoming SaGHAA.

What was the major take-away of this year’s (2019) event, and has that translated into any documented form? Also, are there any book/ monologue/ detailed scientific study being produced from an Indian perspective as a follow up to the SaGHAA events? If so, could you share their names and available links, if they are being kept in the public domain?

Documentation is imperative when SaGHAA’s mandate resonates with information sharing. Now, where should I begin? Every SaGHAA is a forerunner of an edited book. We have three fantastic publications – two by Springer and a third by Iris publication. A fourth publication is upcoming. Apart from formal accounts, we have published popular discourses on India’s Polar science in magazines. Geography and You – a development and environment magazine with nearly one million readers, in fact, has special issues dedicated to India’s Polar engagement over the years. SaGHAA also writes for prominent newspapers, with an aim to bring the spotlight over India’s Polar achievements, especially in the light of Arctic’s emerging importance.

How has the endeavour succeeded in influencing the Indian government’s policies towards the  poles, including climate control measures taken on the domestic front?  If so, could you kindly elaborate?

The SaGHAA endeavour has created an ambience that has helped inspire both Polar science and policy in India. The nation is ready to put in place an Antarctic Law and is beginning to formulate a policy on Arctic as well. The expansion of India’s Arctic stations into Canada and Russia was also discussed during the SaGHAA deliberations—which is soon to become a reality today. As for the Himalayas, a scientific forum, based on learnings from the Arctic Council, proposed during SaGHAA, is also being discussed in the highest governmental echelons.

As polar studies entail a detailed understanding of the cryosphere, climate understanding is intrinsic to all the studies undertaken. In fact, conserving the glaciers in the High Mountains in India is one of the most challenging dialogues in SaGHAA. Recommendations towards such action has been placed before several ministries at the conclusion of each event. Several have been adopted as well.

How LIGHTS have been engaging the global polar community, including researchers, faculties and even scientific explorers, in different aspects of SaGHAA? Do you also plan to scale this up ahead? If so, in what possible ways?

SaGHAA needs to be scaled up – and quickly too. With India’s interest in the Arctic burgeoning in the last few years, SaGHAA needs to be able to step up its contribution. The platform intends to prioritise five goals – documentation towards assisting policy frameworks and building understanding in the populace; active engagement of the existing Polar experts in the nation to usher in new ideas; evolution of multidisciplinary polar projects to engage young talent from varied faculty in the nation; formulation of multi-expert (national and international) capacity building for India’s scientific explorers; and research collaborations with major stakeholders.

How do you see India playing an integral role in comprehensive polar-related matters, including in the Arctic? Does the country stand a chance to achieve this position among other heavyweight state actors that are already engaged in ways and areas that somehow limit its independent participation?

India is delightfully poised at this juncture. With a highly competent researcher capacity, India can well power Polar investigations, especially in the Arctic. Not only does India have the requisite manpower, it has also come a long way in indigenised instrumentation that can effortlessly survive harsh winters. Although India’s investment in Polar studies needs to be stepped up, the achievements of the community far outweigh the present investment.

Any message or appeal that LIGHTS and SaGHAA wish to convey to the global polar community?

I would like to appeal to the global community and draw their attention to the deep connect between geopolitics and the changing climate of the three poles. As the recent IPCC ‘Special Report on the Ocean and Cryosphere in a Changing Climate (SROCC)’ points out, there is a need to take ‘timely, ambitious, coordinated, and enduring actions’ to evade the worst impacts. I also take this opportunity to invite the Polar community for our SaGHAA VI 2020 to be held in September in New Delhi.

Hriday Ch Sarma serves as India Fellow at Polar Research and Policy Initiative and is based in New Delhi. He also heads a non-partisan, non-profit organization Center for South Caucasus-South Asia Business Development, which works in the direction of building economic connections between the two regions.