India’s Engagement with the Polar Regions 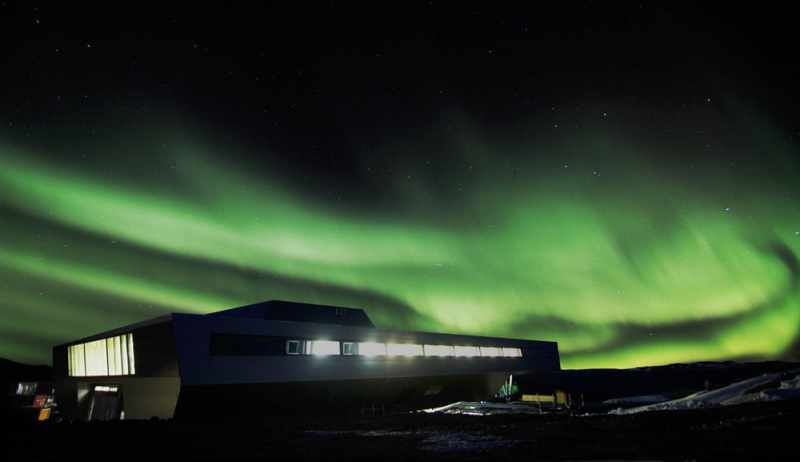 The signing of the Svalbard Treaty in February 1920 marked the beginning of India’s involvement with the Polar Regions. However, its dedicated engagement with the region began when it launched its first Antarctic Expedition in 1981 with the establishment of the National Centre for Antarctic and Ocean Research (NCAOR), an autonomous institution now under the Ministry of Earth Sciences (MoES), Government of India. Ever since, it has been involved in an array of exploration activities there, ranging from human expeditions to advanced scientific experiments, geological and geomorphological mapping, and so on.

In 2007, a five-member team of Indian scientists visited the International Arctic Research facilities at Ny-Ålesund, Norway, for a month and initiated three novel projects in atmospheric science, microbiology, and earth science and glaciology. In the following year, India set up its first Arctic research centre in the Arctic, Himadri, at Ny-Ålesund to carry out round-the-year scientific research activities. This led to India becoming a full member of the Ny-Ålesund Science Managers Committee (NySMAC). It achieved a milestone when it became an Observer State in the Arctic Council in May 2013. Enthused with this rise in stature in the polar community, the Earth System Science Organization (ESSO) under the MoES took a further bold step in the direction of Arctic exploration by successfully deploying IndARC, the country’s first multi-sensor moored observatory in the Kongsfjorden fjord of the Arctic, lying roughly half way between Norway and the North Pole.

The first Indian expedition to Antarctica, the Indian Antarctic Program, reached the ice continent on 8 January 1982. This led to India’s accession to the Antarctic Treaty System on 12 September 1983, which it had signed way back on 1 December 1959. The country established its first scientific research base station in Antarctica, Dakshin Gangotri, during its third expedition to the continent in 1983/84, when for the first time an Indian team spent a winter to conduct scientific research activities. On 22 November 2010, an eight-member expedition team of Indian scientists for the first time landed on the South Pole, which is one of the most extreme places on the Earth to be occupied. In March 2013, India’s NCAOR set up its third permanent research station, Bharati, in the Larsmann Hills section of northeast Antarctica. This station, constructed using detachable yet fully secure shipping containers, is also India’s first committed research facility in the ‘frozen continent’. 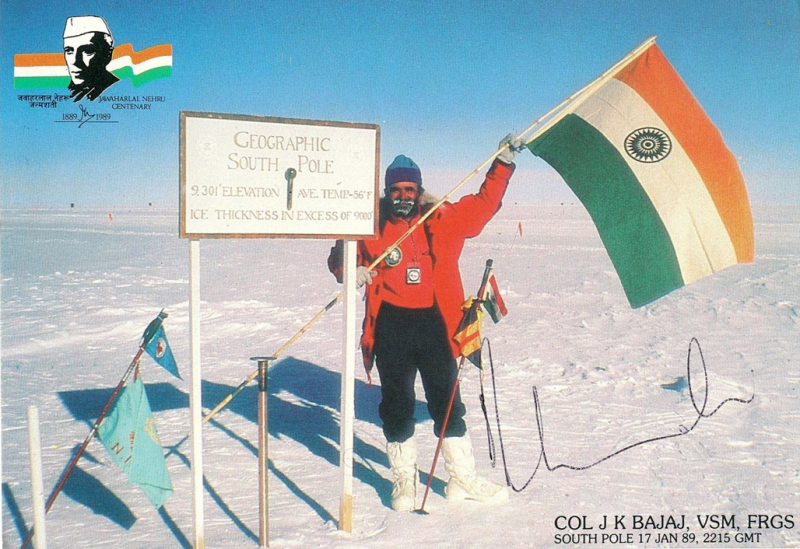 Col JK Bajaj, the first Indian and Asian to step foot on the South Pole. 17 January 1989.

With all of the aforesaid achievements, India has emerged as a reckonable player in polar matters. Therefore, the scientific community in the country – especially the polar fraternity – deserves a pat on the back! However, their research output and contribution still greatly lag when compared with counterparts from smaller polar nations, such as Finland and New Zealand, and prominent world powers, like China and Japan.

L Ramanathan, Professor at Jawaharlal Nehru University (New Delhi) and a leading academician in India working on Polar and Glacial Geochemistry, says, “The Arctic is divided up between the five Arctic [littoral] powers – Canada, Norway, Russia, Denmark (Greenland and the Faroe Islands), the United States – and few other countries in or near the Arctic, like Finland, Sweden, and Iceland. They have been playing the lead role with all Arctic-related affairs on the global arena. At present, India has limited scope to emerge as a prominent Arctic player with the knowledge and resources that we have in hand. We may only cooperate with these countries to make relative gains in Arctic exploration, which the concerned bodies in India are trying with modest success.”

Prof Ramanathan further adds, “For Antarctica is a no man’s land where no particular country or group of countries have dominance, unlike in the Arctic; hence, India has ample opportunities to establish itself as a leading player there. Right now, India is only working in specific regions and conducting basic-level research studies in this largely unexplored continent. In the future, we can pursue research activities in new realms, such as assessment of deep ocean resources, impact analysis of climate change on Southern Ocean Circulation, geological links between the Earth’s Poles and the Himalayas, etc.”

Even today topics pertaining to the Earth’s geographic poles are somewhat fanciful to Indian academics and policy makers. The Ministry of External Affairs (MEA) claims India’s interests in the Arctic region are scientific, environmental, commercial and strategic; but as yet it does not have a clear roadmap to deal with wide ranging challenges in these areas. The common people in the country are completely ignorant about how the Earth’s poles matter to their survival and continued prosperity. India is quite a distance away from the Earth’s poles, and thus, the people and policy makers are not paying heed to the warning signs coming from the Polar Regions in recent years.

At present, India continues to tread on its excessive fossil-dependent economic development pathway while attempting to catch up with the developed Western nations. All development activities continue without any care for the larger interests of humanity and the Earth. So, here is a big problem which, if not handled cautiously, will result in nature’s backlash at the systemic level.

Below are certain recommendations that all stakeholders in India need to urgently take up for preserving the Polar Regions. This will do good to not only them and their future generations, but, in the process, will generate plausibly benefits to the international community, including the Polar nations. Hence, it is equally important for the international community to play an active role in empowering India to responsibly work in the said direction.

India has enormous potential to contribute to the pursuit of scientific exploration and the preservation of the Polar Regions. However, knowledge lag on the subject of Polar Regions among its population and the lack of determined political will are acting as major barriers to achieving any breakthrough in this direction.

At this hour, the international community must try to facilitate India’s proactive engagement with the Polar Regions as one among equals with the Polar powers. Otherwise, India will largely continue with its existing development course that is environmentally detrimental to all of us on this planet. India, in turn, needs to take into account the looming global environment crisis and voluntarily act in ways that are geared towards protecting the Polar Regions.

Hriday Ch Sarma serves as Associate (India and the Polar Regions) at Polar Research and Policy Initiative. He is also a Visiting Research Fellow with the Institute for Defence Studies and Analyses, New Delhi. Hriday is currently pursuing his PhD in Energy Studies at Jawaharlal Nehru University, India. He holds an MA and MPhil in International Relations, and completed advanced diploma courses in international law and environment management.