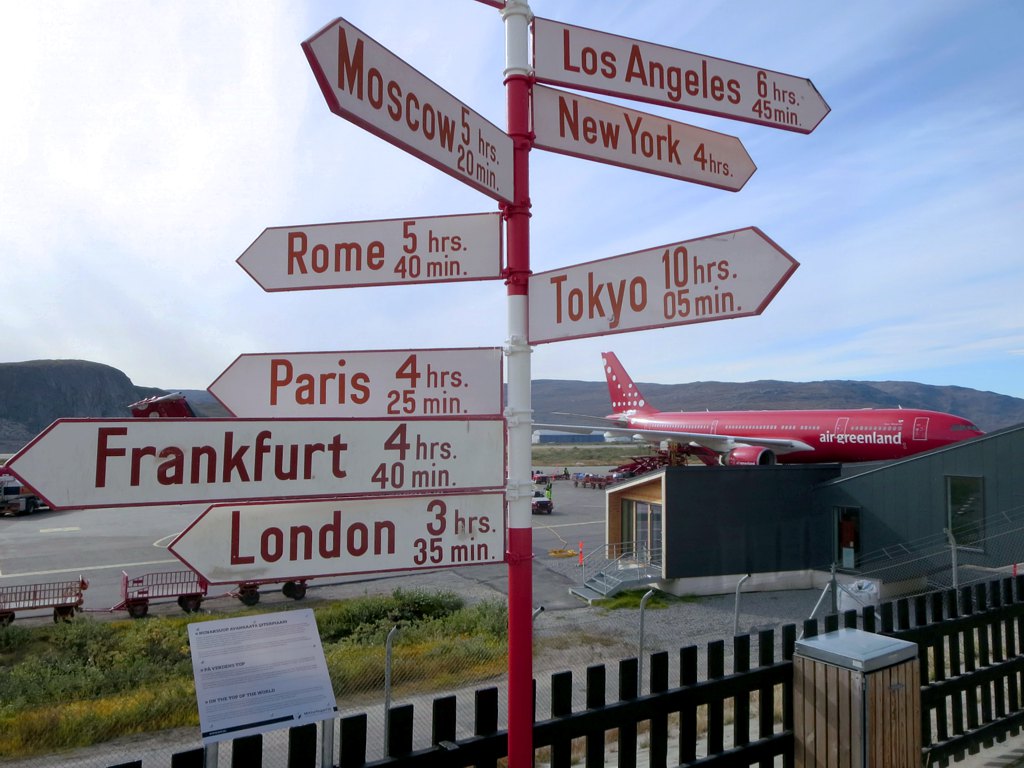 Kangerlussuaq Airport. Image by D-Stanley is licensed under CC BY 2.0

What the heck is up with Greenland, you say?

It’s all about the resources, with some paternalistic colonialism to boot.

To refresh: if you got this far, you probably know by now that Greenland is the world’s largest island, population ~56,000, mostly Inuit, is part of the Kingdom of Denmark and an autonomous territory in its own right, and has had Home Rule since 2009. Basically, Greenland and its parliament control domestic policy, while Denmark oversees foreign policy. Denmark subsidizes Greenland’s economy. In fact, The Washington Post is reporting that the value of this annual subsidy was going to be the suggested offering price for “the transfer of Greenland in perpetuity” — a paltry $600 million USD/ year – which for reference is a little over $10,000 per Greenlander.[1] 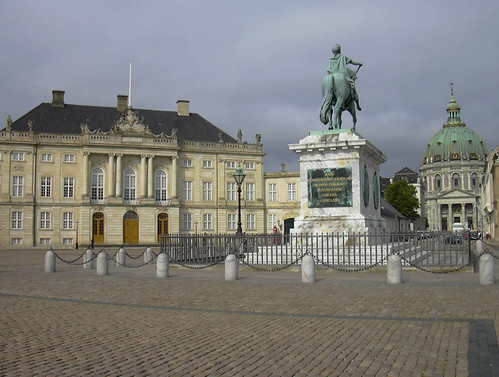 Denmark’s monarchy is over 1000 years old and is Europe’s longest lasting monarchy. Amalienborg Palace (pictured here) is the current main Copenhagen residence of the royal family, though several other palaces remain in the family.

You might even have had your memory jogged about Thule Air Force base, and US interests in Greenland in and after WWII. There’s more to the relationship – this related piece summarizes a long history of US interest in Greenland and other Danish islands,  specifically there is history of Denmark selling islands to the US. It was, in fact, just a century ago that the US finalized the deal purchasing the US Virgin Islands (formerly Danish West Indies, inhabited prior to European expansion and its imported slavery by Carib, Arawak and Ciboney Peoples; these are the islands from whence arose American immigrant Alexander Hamilton) from the Danish. We’ve come a long way since then in terms of human and Indigenous rights, but there’s still a long way to go.[2]

Perhaps uniquely in the world of colonial relations, it is possible that modern Thule Inuit and Norse settlers arrived in Greenland roughly around the same time (the end of the 1st millennium), as Inuit spread East and then South from Canada and Norse settlers came West to southern Greenland from across the North Atlantic (see, e.g. Raghavan et al, 2014). Norse settlers were a marginal but successful part of North Atlantic trade and commerce for about four centuries, supplying Europe with the occasional polar bear and significant amounts of walrus ivory, but they disappeared by the early 15th Century. The disappearance followed declines in European demand for walrus ivory, potentially increasing clashes with Inuit, and other difficulties from maintaining communities in distant, timber- and iron-poor lands (Nedkvitne, 2018, reviewed here by yours truly). 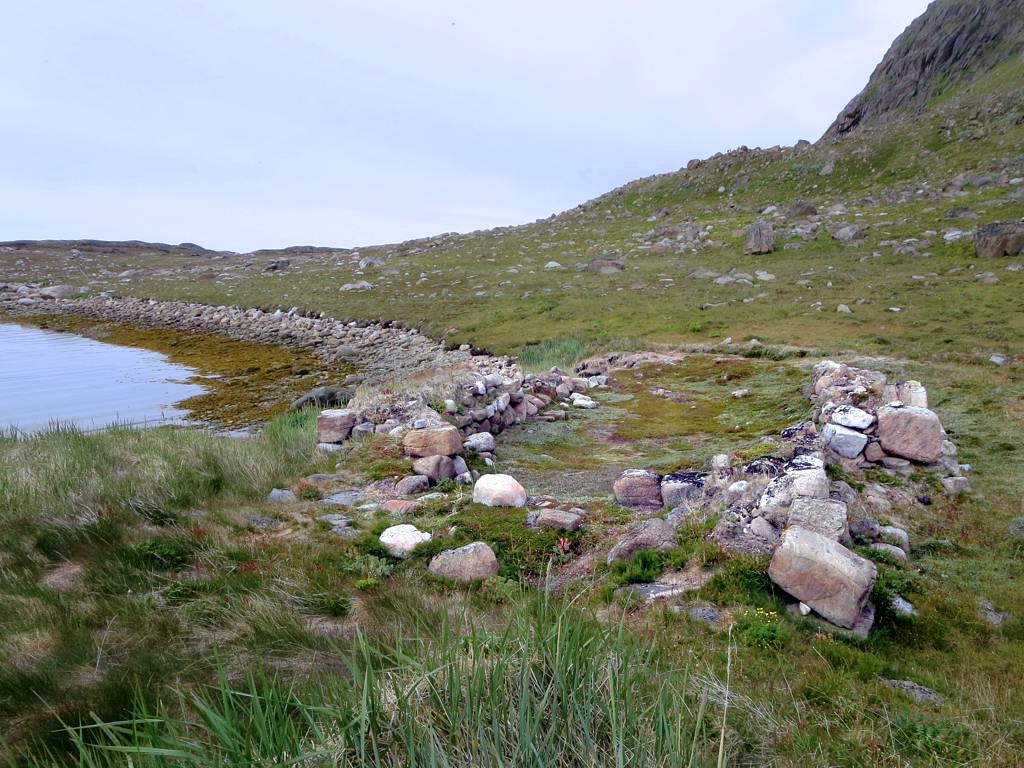 Remains of the Norse Church at Herjolfsnes, Greenland. By D-Stanley.

Several Danish expeditions in the 17th and early 18th centuries kept a Danish claim to the island alive, though efforts to establish trade monopolies on whale, seal and walrus products did not initially prosper (Tejsen, 1977 recounts the history here). Finally the Royal Greenland Trading Company took hold of trading activities in 1776, and the Company continued as a state monopoly until the 1950s. The company remains today, with some old infrastructure remaining (picture below, left), selling you fisheries products in a more competitive framework. Fisheries are by far the largest component of Greenland’s cash economy, with over 85% of trade income coming from fisheries and about 1/2 of that from Northern Shrimp. (Picture below, right).

Efforts to diversify the economy in recent years have included sales of offshore oil and gas leases as well as investments in rare earth mineral and uranium mining. The latter have proven unprofitable so far, with leases returned and a recent round of leases going without bids in 2018 after exploration by Cairns Energy and others in 2010 (and following) resulted in no significant finds.

The table here summarises the leases.

The mineral resources have created stresses within Greenland as well as between Greenland and Denmark. While uranium deposits have been known in Greenland since the 1950s, Denmark’s nuclear non-proliferation efforts and Greenland’s environmental concerns and low levels of human and physical capital in mining complemented each other in supporting a ban on uranium mining until the Greenlandic parliament (in a highly contested, 15-14 vote) lifted it in 2013.

Since then, development of increasingly valuable rare earth elements (REE) and uranium mining has proceeded in fits and starts, but continues to move slowly toward a situation in which Chinese investment creates such mining in the country. (Note China already controls most of the world’s REE supply, which has created a separate set of tensions between the US and China during the ongoing trade wars). The most advanced mining project so far is the Kvanefjeld project, which this year (2019) announced significant breakthroughs in costs that have re-ignited investments. 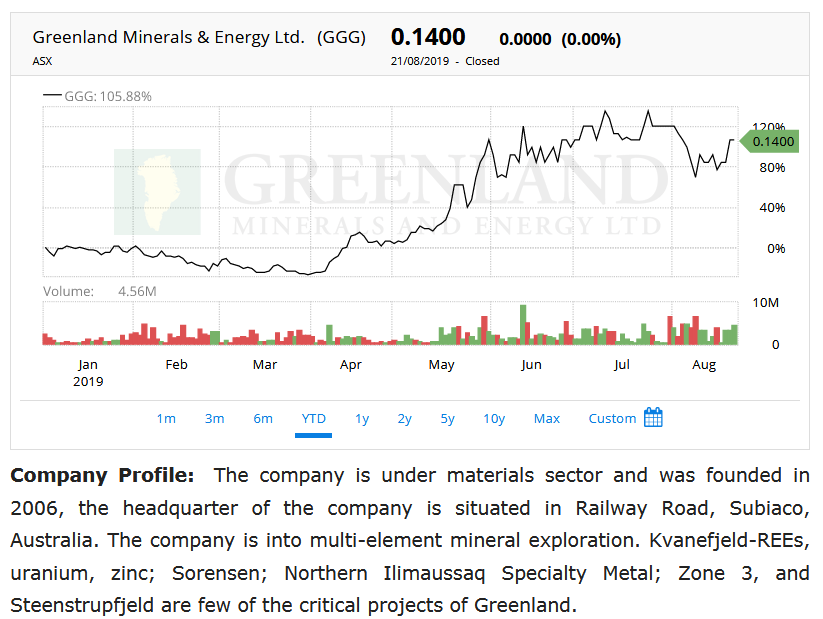 Opinion remains mixed within both Greenland and Denmark. The stock value of the Australian mining company behind the project, Greenland Minerals and Energy, is up over 100% YTD, as shown in the figure above.  But there are many unknowns, including how imported labor and capital would transform Greenland’s communities, what environmental damages might occur, and to whom the economic benefits might actually flow. The art exhibit pictured below captures the tradeoffs elegantly. 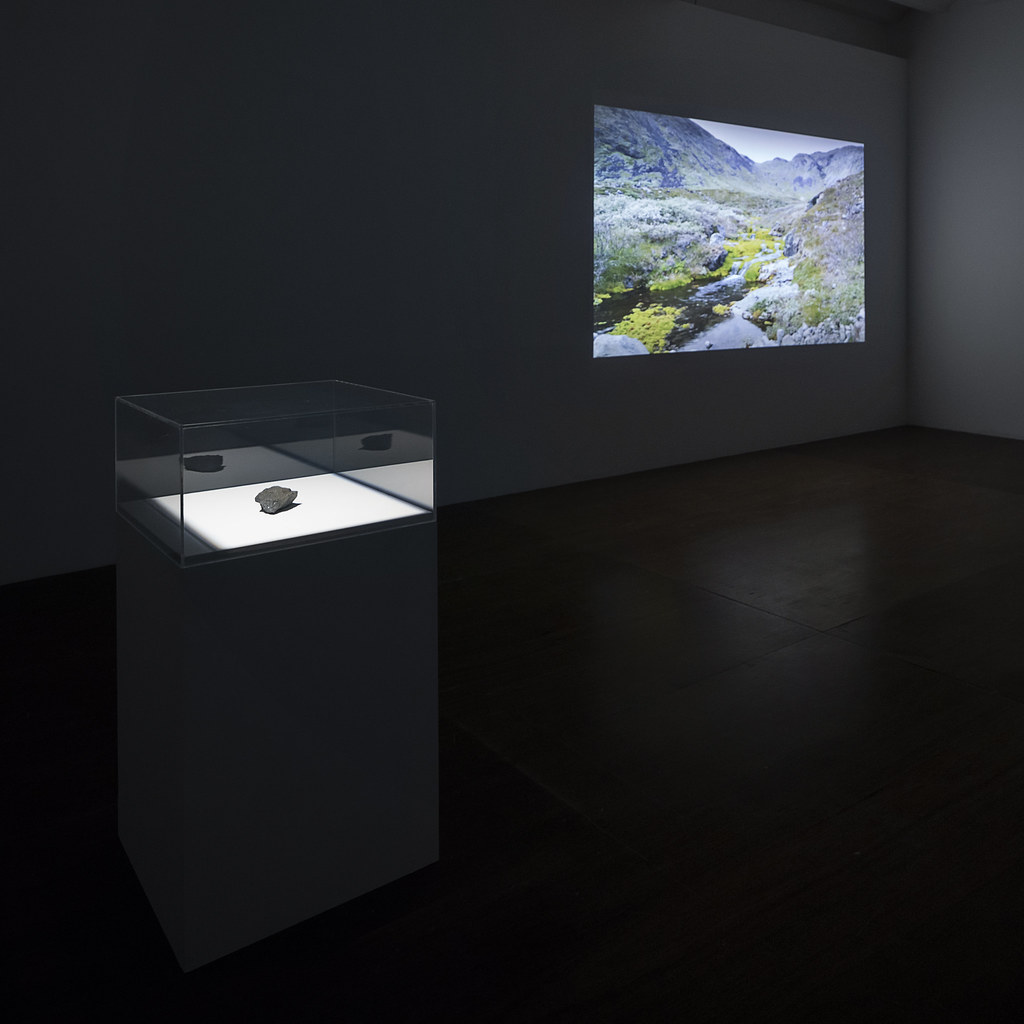 Keeping China at bay in the Arctic appears to be a major policy goal for both Scandinavia and the US. To service the mining development (and other interests in the development of the Polar Silk Road, including tourism) the Chinese had expected to invest in multiple airports in Greenland, pulling out of the enterprises only after the US and Denmark combined forces to stop the investment by providing it “in house.”

The Chinese may have the last laugh on that front; the airports will be improved, the US and DK will pay for them, and the Chinese will still be able to use them. Decisions about how much or how little Chinese influence to accept into Greenlandic culture will ultimately rest with the Greenlandic people, as it should.

[1] I am not sure the US administration realizes that being a member of the Danish Kingdom also includes a variety of benefits not on offer to Americans at this time, including paid university level education (though this is not always simple, with high drop out rates for Greenlanders far from home who may be operating in a second language).

[2] This history with Denmark is just one small part of American expansionism (under the policy umbrellas of the Monroe Doctrine and Manifest Destiny), particularly active in the latter half of the 19th and early 20th centuries that ranged from Sec. Seward’s Alaska purchase on through Sec. John Hay’s policies in the State Department (securing, e.g. American interests in the Philippines, China, Panama and beyond), and as currently being contested at Mauna Kea in Hawaii. As should be expected across a diversity of human wants and needs, and as described above with respect to Greenland’s internal struggle over the tradeoffs between e.g. mining development and potential environmental quality, there is no single set of Indigenous preferences for outcomes over how to use scarce resources; rather, some Native Hawaiians oppose the building of another telescope atop their sacred mountain while others embrace the potential for economic and scientific opportunities. The common ground within Hawaii is that both sides have been sidelined with decades of unmet promises. Like other Indigenous communities, they’ve had their lands and resources, and decision-making authority over them, reduced by externally imposed interests and powers. Denmark’s Prime Minister has stated “Greenland is not Danish. Greenland is Greenlandic” and I hope she means it!