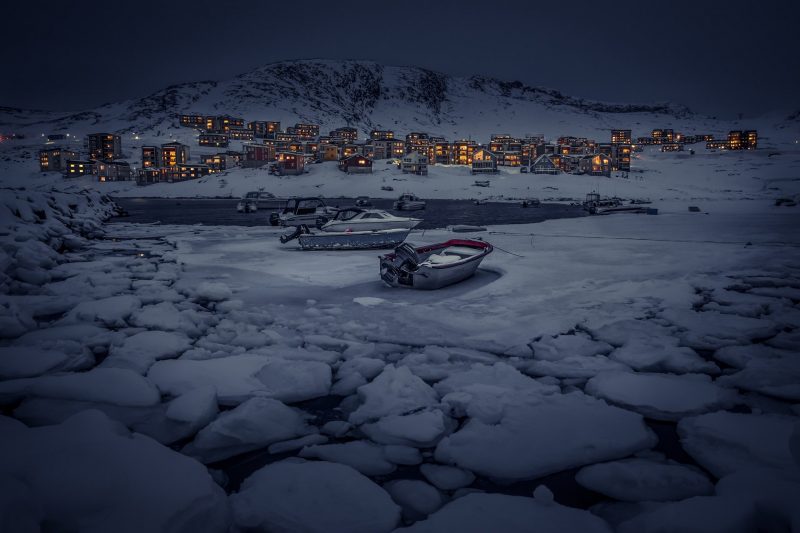 Image: A winter evening in the suburb of Qinngorput in Nuuk, Greenland © Mads Pihl – Visit Greenland

Recognising the challenges and opportunities arising from a changing Arctic, the World Economic Forum has convened a Global Agenda Council on the Arctic, with a mandate to “work better and more uniformly with governments and business leaders to contribute to the sustainable management of this unique region.” The Council’s 22 members include the heads or senior executives of Pt Capital, Guggenheim Partners, Barclays, Tschudi Shipping Company, Norwegian Shipowners’ Association, China COSCO Shipping Corporation, Statoil, Royal Dutch Shell and Sapinda CIS. It also counts among its members senior academics at University of Alaska Fairbanks, UCLA and University of Oxford; senior executives at CSIS, New Eurasia Foundation, Norwegian Polar Institute, Protect Sápmi, Quaternary Research and The Polar Journal; and senior officials from Canada, Norway, Japan and South Korea.

In December 2015, the Global Agenda Council on the Arctic published the Arctic Investment Protocol it had developed as an important first step towards the inclusive, transparent, accountable, measurable and sustainable development of the Arctic. In January 2016, the report was first issued in Davos-Klosters (Switzerland) after its presentation at the 2016 Annual Meeting of the World Economic Forum. The Arctic Business Council, and various scientific and environmental organisations, also provided input while the principles were being drafted. Its stated purpose is “to promote sustainable and equitable economic growth in the region that furthers community well-being and builds resilient societies in a fair, inclusive and environmentally sound manner.” While it does not provide an authoritative blueprint that is detailed or contractual, it sets out core principles for responsible Arctic development, with the hope that businesses will comply and cooperate with them.

As Mr. Jonas Gahr Støre, Chair of the Global Agenda Council on the Arctic, shared, the purpose of the Protocol is to “contribute to economic development that is well balanced with environmental and other concerns.”

In January 2016, the Arctic Investment Protocol received its first official endorsement from Guggenheim Partners, a US-based global investment and advisory firm with more than $240 billion in assets under management and 2,500 professionals working in more than 25 offices around the world. As the first financial services firm to formally endorse this landmark report, this was a significant milestone. Scott Minerd, Global Chief Investment Officer at Guggenheim Partners and member of the WEF Global Advisory Council on the Arctic, stated, “As climate change transforms the Arctic, the Arctic will transform the world.” He added, “Building a sustainable future for the Arctic region and its people requires long-term capital that carefully weighs environmental and societal impact. The Arctic Investment Protocol represents a new approach to sustainable development that the world needs today.”

In its press release, Guggenheim noted: “With a population of more than 12 million people and an annual economy of more than US$450 billion, the Arctic represents one of the last great economic frontiers. Today, the economies of the Arctic are responsible for a significant share of the world’s food, minerals, and energy. The region is also home to cutting-edge scientific research and leading models for sustainability. As climate change impacts the Arctic, the region continues to grow in importance to the world — environmentally and economically. In the near future, the Arctic will play a pivotal role in global trade, with more than 25 percent of Asia-Europe container trade expected to travel through the Northern Sea Route by 2030. The Arctic of tomorrow will also be responsible for a much larger portion of the world’s food production and green economy, including bioprospecting and renewable energy.”

“To adapt and thrive”, it noted, “communities need critical and careful investment today, paired with a strong commitment to protect and preserve the environment for future generations.” As estimated by Guggenheim Partners, while sustainable development worldwide will require an annual investment of US$4.5 trillion, infrastructure requirements in the Arctic alone are expected to be nearly US$1 trillion in infrastructure investment over the next 15 years. Seeing sustainable development as a “generational imperative”, the firm was collaborating closely with international partners to establish the Arctic Infrastructure Inventory that would help identify and prioritise infrastructure needs across the region. Guggenheim remains certain that there is opportunity for a “dedicated sustainable investment vehicle to finance infrastructure projects with meaningful and positive impact in the region”, with its investments guided by the Arctic Investment Protocol.

In February 2016, the Arctic Investment Protocol was also endorsed by the American Geographical Society (AGS). Mr Jared Novick, Chairman of the AGS Endorsement Committee, shared, “In geographic areas rich in potential like the Arctic, economic growth is an inevitability. AGS stands behind the goal of the WEF Arctic Investment Protocol as they set a standard across both human and environmental interests for responsible and sustainable growth in the region.” This is the second WEF report endorsed by the Society, which, since its establishment in 1851, has served as the oldest professional geographical organisation in the United States and one of the original international organisations to support Arctic exploration and research.