Arctic Geohazards in response to Climate Change: A Short Briefing 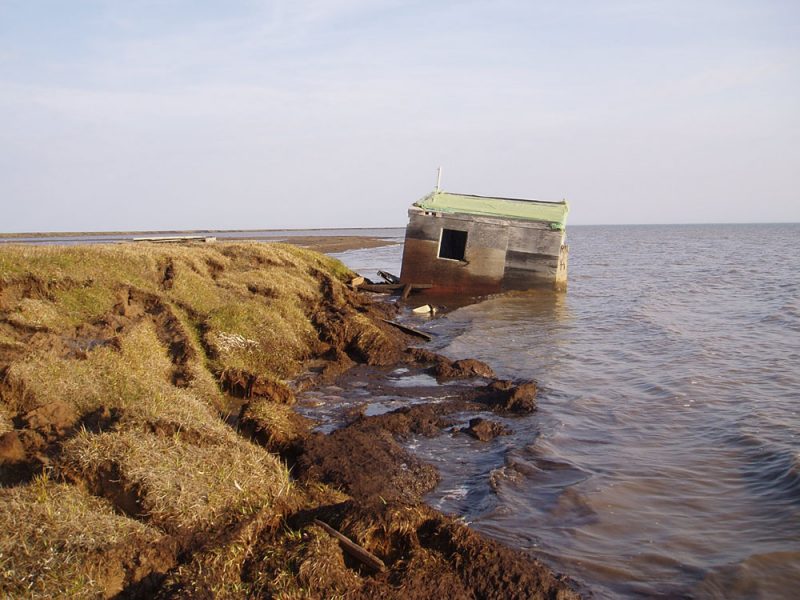 A cabin along Alaska’s Arctic coast was recently washed into the ocean because the bluff it was sitting on eroded away. Photograph by Benjamin Jones, USGS.

The effects of climate change are manifested most vividly in the Arctic. What geohazards may arise in the Arctic as a result?

The Arctic is responding faster to climate change than anywhere else. The figure below highlights excessive Arctic warming, due to the process of polar amplification. The temperatures shown (in oC) are anomalies for the period October 2015-2016, departing from the 1961-1990 mean. As shown, recent temperatures over the Kara Sea and Arctic Ocean have been exceptionally warm. 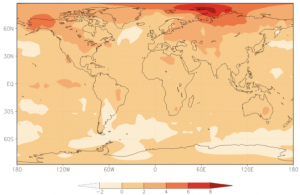 The manifestation of this warming is clear. The decay of Arctic permafrost throughout the twentieth century, declining from 12 million km2 to 10.5 million km2 (Lawrence, D. & Slater, G. 2005), has been well documented. This is in part because of the potential impact of methane release upon the Earth’s climate. Similarly, the melting of methane clathrates in ocean sediments, which store even more methane than permafrost, has been widely studied (Maslin, M., et al. 2010).

Perhaps the most well publicised effect is the demise of Arctic sea ice. Sea ice is vital in regulating Earth’s climate, from reflecting incoming solar radiation to influencing bottom water formation. Arctic sea ice extent (as of 11th November 2016) is the lowest ever on this date. The effect of this decline upon ecology and climate has been well documented.

Aside from the traditionally discussed challenges in the Arctic, what geohazards will arise in the face of climate change?

Permafrost is effectively permanently frozen sediments. Decaying permafrost has many impacts, namely the release of methane and the destabilisation of anthropogenic structures such as roads and houses. Another lesser known effect of permafrost decay is an increase in coastal erosion rates.

Sediments that are frozen are structurally much stronger than thawed sediments. Regions of the Arctic, such as Alaska’s North Slope, have seen warming of permafrost on the order of 2-4oC in the last century (Mars, J. & Houseknecht, D. 2007). As previously mentioned, permafrost extent has declined from 12 million km2 to 10.5 million km2 over this period (Lawrence, D. & Slater, G. 2005). Not only does this warming thaw sediments, making them weaker, it also ‘wets’ the sediments, increasing plasticity. This double effect amplifies the structural weakening of sediments after permafrost thaw (Mars, J. & Houseknecht, D. 2007).

‘Wetter’, weaker sediments are much more susceptible to erosion than strong, frozen permafrost. Because of this, wave action is rapidly eroding recently thawed cliffs in the Arctic. The problem is intensified because of local rock types. Many cliffs are composed of little more than mud, which is easily eroded by wave action. 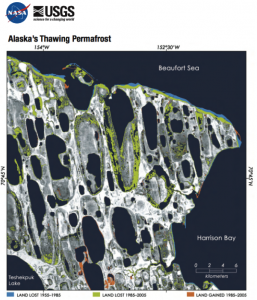 There is unequivocal evidence that the rate of coastal erosion in the Arctic is amplifying in response to climate change. Some areas of the North Slope have undergone almost 1 km of erosion over the last 50 years, with land loss rates doubling from 0.48 km2 yr-1 to 1.08 km2 yr-1 (Mars, J. & Houseknecht, D. 2007).

The Landsat image above, taken from NASA, highlights the accelerated rate of land loss in the latter part of the 20th century. In many places, thermokarst lakes have become inundated with ocean water.

So what threat does coastal erosion pose to the Arctic region? The most immediate threat is to ecology. Many Arctic areas are characterised by thermokarst lake habitats. As shown in the above image, coastal erosion reduces these lakes to saltwater lagoons. Narrow migration pathways used by Caribou may also be at risk of destruction. See this interview with Hugues Lantuit for more information.

Coastal erosion also has human impacts, both on Indigenous people and companies looking to exploit the Arctic’s wealth of natural resources. Alaska’s North Slope in particular is a key location for the oil industry. Future coastal erosion may threaten built structures and pipelines.

Indigenous communities are commonly located in low lying areas, often along rivers, which are at risk of being engulfed by coastal erosion (Mars, J. & Houseknecht, D. 2007). One such example is the Alaskan village of Shishmaref, which took the unprecedented decision to relocate from its island in the Bering Strait to the Alaskan mainland. This decision was made in response to rapid coastal erosion induced by sea level rise, permafrost melt and Arctic sea ice loss.

Whilst coastal erosion is unequivocally taking place in the Arctic, the probability of an Arctic tsunami is a topic of debate. Ordinarily, tsunamis are created due to vertical disturbances of the seafloor in response to earthquakes taking place at subduction zones (Norio, O., et al. 2011).

In the Arctic, the proposed mechanism for slope sediment destabilisation is the melting of methane clathrates (Maslin, M., et al. 2010). Methane clathrates are methane molecules trapped within a water ice structure. Clathrates effectively ‘cement’ sediments together and increase their strength (Grozic, J. 2010). If widespread melting of clathrates ensues then there is a potential for slope sediment strength to decline, collapse and initiate a tsunami (Maslin, M. et al. 2010).

Historically, the Storegga slide, which occurred off the west coast of Norway 8,000 years ago, is believed to have been caused by shelf sediment collapse in response to melting clathrates (Bouriak, S., et al. 2000). The slide (collapse of shelf sediments) initiated a 20 metre high tsunami which impacted Norway, Britain and the Faroe Islands (Bondevik, S., et al. 2005). Given current rates of methane clathrate melting in the Arctic, there may be a risk of a similar event occurring. The likelihood of such an event is poorly quantified (Maslin, M., et al. 2010).

A second shelf sediment destabilisation mechanism was proposed by Maslin, M., et al (2010). Melting of continental ice sheets, such as that which is occurring on Greenland, reduces continental mass loading. In response to this, continents, in this case Greenland, physically rise up in response to the reduced loading. This process is known as isostatic rebound. This isostatic rebound produces a local sea level reduction relative to the continent. The subsequent reduction in weight pressing down upon shelf sediments may induce their destabilisation. This process could be the most likely Arctic tsunami generation mechanism (Maslin, M., et al. 2010).

The Arctic region faces two primary geohazards in the face of climate change: Coastal erosion and, to a lesser extent, tsunamis. The threat posed by an Arctic tsunami is poorly understood. Further research is vital in understanding the likelihood of this threat given the potential human impact.

Coastal erosion is already taking place in the Arctic, its impacts already being felt. In the future, coastal erosion must be a factor in the planning of new built structures. For the present, a policy framework must be created to combat coastal erosion, particularly where it impacts vulnerable indigenous communities.