Setting up a U.S. Consulate in Greenland, Again 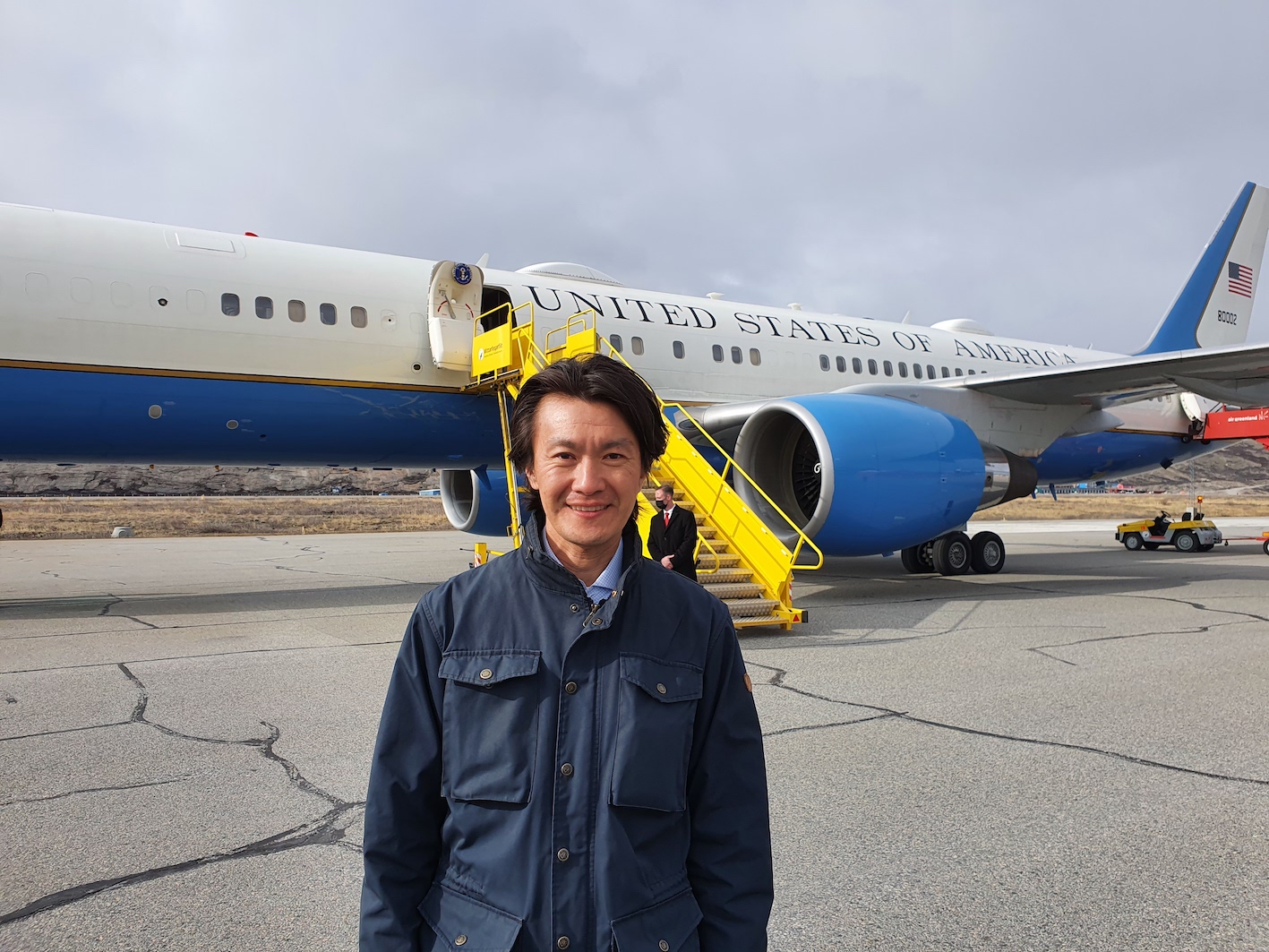 Sung W. Choi, pictured, who has served as Consul at the U.S. Consulate Nuuk from June 2020 to June 2021, takes stock of the key milestones in the 12 months since the United States reestablished a permanent U.S. State Department presence in Greenland.

On May 9, 2019, the United States announced its intention, after six decades, to reestablish a permanent Department of State presence in Greenland. Thirteen months later, on June 10, 2020, U.S. Consulate Nuuk was reestablished and, at 64.17° latitude, we regained the title of the northern-most U.S. diplomatic facility in the world.

Reopening During the Pandemic

The early 2020 onset of the COVID-19 pandemic delayed the Consulate’s reopening. We had secured temporary office space within the Danish Defense’s Joint Arctic Command headquarters in Nuuk, but local staff hiring went slowly. Two State Department Foreign Service Officers and one U.S. Agency for International Development (USAID) Senior Development Advisor formed the initial complement of diplomats. I was one, transitioning from a position at the Embassy in Copenhagen to serve as the Consul in Nuuk. Granted special permission, I flew to Greenland in early May 2020, and quarantined for two weeks. Plans to reopen the Consulate on May 23 (to commemorate the date of the 1940 opening) were scrapped as Greenland’s borders remained de facto closed.

Instead of a reopening with bells and whistles, the Consulate enjoyed a modest gathering of Greenlandic and Danish guests. We bumped elbows and, with social distancing, mingled over coffee and cakes, but the unmistakable pall of the pandemic that was encircling the globe hung in the air. Nonetheless, we were safe in Nuuk. The Commander of Joint Arctic Command extended congratulations from the Danish Foreign Minister, who was unable to travel. In person, the Greenlandic Minister for Foreign Affairs said, “I am happy to welcome the United States back to Greenland.”

At noon, on June 10, 2020, the American flag rose above our new Consulate. A few days later, the bronze seal was mounted out front. Over the summer, I was joined by colleagues from the State Department and USAID.  We were officially back and open for business for the first time in 67 years.

Thirteen Years, Thirteen Diplomats in the First Round

Shortly after Nazi Germany invaded Denmark, the State Department, on May 1, 1940, telegraphed the U.S. missions in Copenhagen (and Berlin as an afterthought) that a consulate in Godthaab (Nuuk) would be established on a provisional basis. The New York Times reported the following day that this development signified “American interest in Greenland as a region that falls under the Monroe Doctrine.” With war-time alacrity, and typewriters, stationery, seals and stamps, and a flag and coat of arms in tow, the first designated Consul, James Penfield, embarked May 10 for Greenland on the Coast Guard Cutter Comanche from Staten Island’s Pier 18. Thirteen days later, he arrived in the colonial harbor of Godthaab, greeted offshore by men in kayaks. Penfield’s immediate task was to lease an office and residential quarters, while “cautioned to use all possible economy in keeping the expenses as low as possible.”

Thirteen Consuls and Vice Consuls rotated in and out of Godthaab during the Consulate’s original incarnation.  During Penfield’s assignment, he worked with the U.S. Coast Guard to capture the first Nazi weather station in Northern Greenland, thus helping to disrupt German air operations against Great Britain. The Consulate’s primary responsibility then was “to act as a liaison capacity between the Greenland Administration and the United States military and naval authorities in Greenland.”

Posted when Godthaab had no airport, its population was growing from 700 to 1,600, and dependent on sporadic Air Force airdrops of official mail (and sometimes food), the original Consulate’s diplomats faced harsh sub-Arctic conditions. Yet they were blessed with hospitable hosts. Unfortunately, the first Consulate in Greenland closed its doors in August 1953, after thirteen years in operation. Also on the chopping block that month, due to budgetary limitations, were consulates in Malaga, Spain, and Cebu, Philippines.

Providing a Bridge to the U.S.

Greenland’s capital, Nuuk, now has over 18,000 people, one-third of the island’s population. Since the early 1900s, the hydrographic shift north of the Irminger Current has warmed Greenland’s western shores, filling its sea and fjords with cod and halibut. These changes generated a shift away from subsistence seal hunting.  Industrial fishing and shrimping became Greenland’s path to increased economic self-sufficiency. How much longer the bountiful stocks will last is a hotly debated question, whose answer depends on global and local environmental forces as well as sustainable practices. As the island’s small population has increasingly tied its fortune to the rise of seafood exports, the Government of Greenland is working with the United States to help diversify its economy.

Whereas the first Consulate was focused on military liaison responsibilities, the new Consulate serves as a resource for U.S. government agencies ranging from the State Department to the Departments of Commerce and Interior, working on sustainable tourism as well as land and park management. Memoranda of Understanding signed between the State Department’s Bureau of Energy Resources and Greenlandic counterparts on mineral resources and energy have paved the way for strong cooperation that includes advancing micro-hydro and other renewable energy projects in remote settlements. USAID is spearheading an effort to better appreciate and target economic and infrastructure development opportunities across the island.  In October 2020, in connection with discussion on the Thule Air Base maintenance contract competition, the United States and Greenland signed a Common Plan that charted key areas of current and future non-security cooperation.

American diplomacy involves sharing our culture with the public. In the 1940s, with the U.S. presence, Greenland opened up to a non-Danish supply chain for the first time. The U.S. Coast Guard carried mail around Greenland free of charge, and sold food and materials at cost. The people of Greenland were able to purchase apparel and household items from American mail order companies. “[C]onsiderable time was spent [by Consulate staff] in explaining to various persons the terms used in the catalogs and assisting them in their ‘catalog buying.’” Even motion pictures and other entertainment were provided.

Will the United States Take over Greenland?

“The questions most asked in Greenland during the summer of 1940 seemed to be, ‘will the United States take over Greenland’ and ‘what will happen if she does.’  However, as the months went by these suspicions abated . . . .”  — Vice Consul Arvid Holm

Against the backdrop of former President Trump’s stated interest in considering a purchase of Greenland in August 2019, for months Danish and Greenlandic media, politicians, and public questioned U.S. motivations for reestablishing a consulate in Nuuk. One influential Danish journalist argued that the United States was preparing for Greenland’s independence in a few years. Others argued that we were, purposefully or not, escalating tensions in the Arctic.

Our message in Washington and Copenhagen was straightforward. As a senior State Department official stated, “[T]he opening of our consulate in Nuuk will be the culmination of a process working with the Greenlanders and the Danes that looks to build on our decades of cooperation, and in some ways it’s also a new beginning. It’s an expansion of our investment in that relationship that . . . looks forward to deeper security, deeper economic and deeper people-to-people ties between the United States, Greenland, and the Kingdom of Denmark.” Also, the United States is an Arctic nation, and that proximity between the United States and Greenland compels us – like any other foreign ministry – to understand what is happening in the Arctic.

Greenland Is a Natural Host for Polar Diplomacy

Greenland is now a semi-autonomous, self-governing part of the Kingdom of Denmark, our NATO ally. Three times the size of Texas, Greenland is geographically part of the North American continent and straddles the Atlantic and Arctic Oceans. The island’s majority Inuit population and the Greenlandic language are related to those in Alaska and the Canadian Arctic. Thule Air Base, located near the northern tip of the island, with its early-warning missile defense radar, has been protecting the American homeland since the early 1950s.  Russia’s revived militarization along its Arctic coast and Beijing’s ambitions to exploit polar sea routes and resources have intensified strategic choices, including those of the United States, in the High North.

Summit Station, located in the middle of the Greenland ice sheet and two miles above sea level, was established in 1989, and serves as a hub for U.S. National Science Foundation-funded research on Arctic atmospheric and surface mass calculations, feeding invaluable data into global climate models. Paradoxically, while Greenland’s approximately 56,000 inhabitants have done little to contribute to the warming of the planet, research by NASA concluded that the melting of Greenland’s glaciers is now the largest contributor to global sea-level rise.

Glass half-full entrepreneurs are exploring whether that fresh water, flowing unfettered into fjords, could supply safe drinking water to the driest nations on earth. Greenland’s mineral resource reserves are abundant, including rare earth elements vital for today’s green technology, from permanent magnets in wind turbines to cutting-edge electric car batteries. The current construction of two new airports, in Nuuk and Ilulissat (home of the UNESCO World Heritage Icefjord), capable of landing jet planes has potential to vastly increase U.S. tourism to Greenland. Re-opened shipping routes between Portland, Maine, and Nuuk, via Reykjavik, could jumpstart bilateral commerce that has been practically non-existent.

For these strategic, commercial, and environmental reasons, the newly reestablished Consulate in Nuuk will have a busy future.

One Year In: Proud of Our Shared Experiences, Excited to Build More

Today, the new Consulate has a mandate to reach out further within Greenland. A public diplomacy officer is charged with that effort, which has already led to extensive social media outreach on Facebook and Instagram.  We’ve posted messages about our growing  partnership from one of the world’s northernmost settlements (Siorapaluk, pop. 43), Summit Station (-8°F in the summer), Thule Air Base, the bridge of the Danish Navy’s HDMS Lauge Koch, the helicopter hangar of the U.S. Coast Guard Cutter Campbell, ruby and titanium mines, and all four high schools in Greenland. Demonstrating our ruggedness, last November’s U.S. election watch gathering continued despite a gale with gusts surpassing 100 miles per hour. We’ve witnessed calving glaciers and a swimming polar bear; joined reindeer and muskox hunting trips; experienced the dueling polar majesties of the Northern Lights in the winter and the summer Midnight Sun; and tasted Inuit offerings of seal and whale meat—all in the pursuit of forging stronger bonds between the United States and Greenland.

As we neared our one-year anniversary, on May 20, 2021, Secretary of State Antony J. Blinken visited Greenland and met with the new Greenlandic Premier Múte Bourup Egede, Minister for Foreign Affairs, Business, Trade and Climate Pele Broberg, and Danish Foreign Minister Jeppe Kofod. The visit reinforced the strong connection between the United States and Greenland and the entire Kingdom of Denmark. As Secretary Blinken left Kangerlussuaq, he said, “It was wonderful to meet the small and mighty team at the newly reopened U.S. Consulate. Congratulations on almost one year in operations and qujanaq for all your hard work strengthening our relationship with Greenland.” Our small, but mighty, team at the Consulate is proud to represent the United States in Greenland, again.