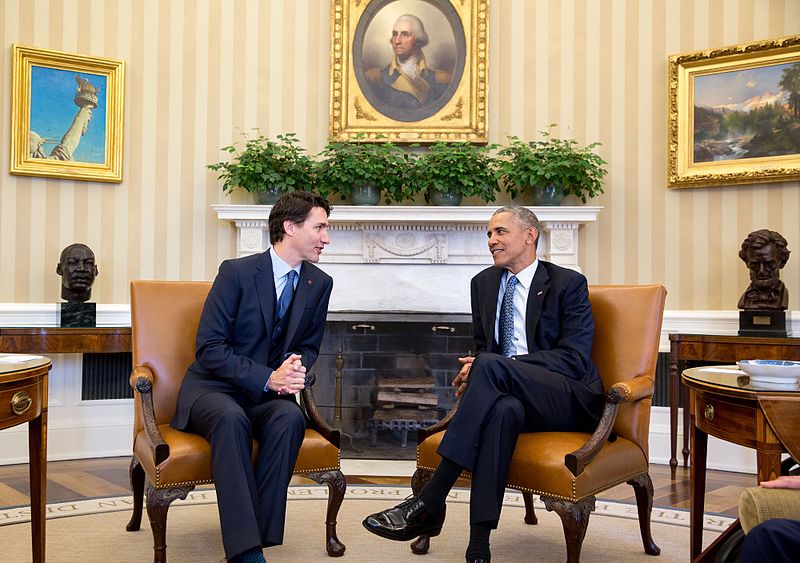 By Josh Caldon and Andrew Chater

On 10 March 2016, President Barack Obama of the United States and Prime Minister Justin Trudeau of Canada issued a joint statement that pledged each country would protect at least 17 per cent of its respective Arctic land area and 10 per cent of its Arctic marine area by 2020. This institutionalised protection of polar territory is not a new phenomenon for an American president, especially at the end of their term in office, nor is environmental protection an uncommon goal for Canadian Prime Ministers. However, cooperation between Canada and the United States to institutionalise protection of polar territory has occurred only occasionally. What led to this new cooperation? Ideological unity, a desire to change course in Canadian Arctic policy and even the strength of friendship between the two countries’ leaders explains the new Arctic pledge from Canada and the United States.

A mutual desire to tackle climate change explains the basic origin of the most recent environmental protection agreement between Canada and the United States. Fighting climate change has been a key policy area of the Obama Administration, and an area that has attracted criticism. Canada, too, had initially invested political capital in responding to climate change, as a signatory of the 1997 Kyoto Protocol. A plethora of environmental groups roundly criticised the 2006-2015 Conservative government of Stephen Harper for withdrawing from the protocol on 13 December 2011 (the first signatory to do so) as well as a general lack of attention to climate change that resulted in a 25.9 per cent increase in CO2 emissions from the 1990 baseline year.[1] Strong action on global warming was a key promise of Justin Trudeau and the Liberal Party during the 2015 Federal election. With two ideologically liberal leaders seeking action on climate change, action such as the aforementioned agreement is hardly surprising.

It is not unprecedented that the Arctic has emerged as a focus for the two countries’ rejuvenated efforts to address climate change now. Both countries have a history of looking at the region as environmentally relatively pristine. By 1890, many Americans came to view Alaska, America’s polar territory, as a last frontier and a last wilderness. This dual imagery was a reaction to the dwindling wilderness areas in the lower forty-eight states and the perceived wastefulness that accompanied the “winning of the west” – beliefs given credence by American romantic writers such as Thoreau, painters such as Thomas Cole, and a growing group of ecologically motivated and influential scientists such as John Muir and Aldo Leopold. Canada, as well, had similar reactions to its western expansion. Images of Arctic landscapes are prominent in artworks from the famed Group of Seven, and prominent authors such as Pierre Burton and Farley Mowat presented vivid tales of the Arctic wilderness in their work.

This view of the environmental can be traced to the early 20th century in both countries politically as well. President Theodore Roosevelt was the first United States president to promote the preservation of wild places as a way of maintaining America’s frontier mindset and national vigour. In the last two years of his presidency, he established numerous national parks and monuments, mostly in western states, through the Antiquities Act of 1906; and he convened a conference of American state governors to discuss conservation. In doing so, Roosevelt effectively tapped into and influenced a strengthening environmental ethos within the American population that has increasingly valued preservation of wilderness territory. The follow-on efforts to institutionalise the preservation of wild lands has affected polar areas more than any other region, and Roosevelt’s example has been adopted by successive American presidents. In many ways, a similar ethos affected Canada in this era. The government of Canada also created national parks during the early 1900s, namely Thousand Islands in 1904 and Jasper in 1907.

As environmental preservation has gained strength, many Presidents have focused their environmental efforts on polar regions. Part of the reason for this is the polar regions’ relative austerity, which is largely the result of geography, climate, and a lack of transportation infrastructure connecting polar regions to populated areas. Since there is little development, because the majority of America’s polar territory is managed by the federal government, and because the United States Antarctic Program is a federal program, institutionally protecting polar regions often costs a President relatively little political capital to push through and is often rewarded with acclaim and prestige – boosts to a presidential legacy. The situation is similar in Canada, where a lack of infrastructure and national attention has left the region comparatively austere.

This low-risk, high-reward dynamic, and an American ethos that values wilderness protection, makes polar preservation a somewhat normal occurrence at the end of presidential terms. This is especially the case when progressive-leaning Presidents view polar regions at risk due to the potential election of successors deemed much less progressive than themselves. An example of this was President Jimmy Carter, who pushed through the Alaska National Interest Land Conservation Act in 1980 that protected 104 million acres of Alaska territory, an area larger than California, at the end of his tenure as President. Carter, and his supporters, were fearful the Reagan presidency that followed him would expand the Arctic resource extraction that occurred during the previous Nixon presidency, and Carter needed a boost to his presidency after a tough four years in office.

Obama’s focus on Arctic preservation also comes at the end of his presidency, with the possibility of Donald Trump waiting in the wings to take over the American executive office. With Obama’s foreign policy and lack of movement with regard to the environment increasingly coming under fire at home, Obama visited Arctic Alaska in September of 2015 – a first for an American president – and promised to establish 12.3 million acres of new wilderness in the Arctic National Wildlife Refuge (ANWR). He also used his trip to the Arctic to tie the region into the larger efforts his administration was pushing at the Paris Climate Accords and with the American chairmanship of the Arctic Council.

In Canada, the situation is different, as the action comes at the beginning of Justin Trudeau’s time as Canadian Prime Minister. In 2010, the Conservative government announced it would not honor Canada’s Kyoto emissions reduction target of 6 per cent below 1990 levels, instead pledging “an economy-wide emissions reduction target for 2020 of seventeen percent below 2005 levels.”[2] The 2015 Liberal party platform pledged to “develop real climate change solutions, consistent with our international obligations to protect the planet, all while growing our economy.”[3] The Arctic agreement was a way for Trudeau to make early progress on the Liberal promise, less than six months into their mandate.

Justin Trudeau has attempted to promote a new vision of the Canadian Arctic, as a zone of cooperation. The previous government under Conservative Stephen Harper emphasised military security issues in the Arctic, such as boundary disputes and military procurement. Harper was not generally a strong supporter of international institutions and international law. In 2016, Trudeau did not attend Canada’s annual summer Arctic military exercise Operation Nanook, as his predecessor did every year. Whereas the previous government chastised Russia at every opportunity, Trudeau’s government has called for new cooperation with Russia in the Arctic Council. Trudeau was a vocal supporter of the Paris Climate Accords, which his government ratified in 2016. Cooperation on environmental issues with the United States is no doubt part of an attempt to enhance the view that the Liberal government will pursue multilateralism.

While progressive Presidents and Prime Ministers have been most forceful in their late-term efforts to protect polar regions, even less progressive Republican presidents such as Eisenhower, Reagan, and George W. Bush have institutionalised protection of polar regions at the end of their presidential terms in order to boost their environmental legacies. Eisenhower pushed for and signed the International Antarctica Treaty in December 1959 before his term ended in the beginning of 1961 – a treaty that has kept the whole Antarctic continent from development. Reagan signed an agreement with Canada in July of 1987, before he left office in January of 1989, to protect migrating caribou herds between Arctic Alaska and Canada. This agreement was with Brian Mulroney, a Progressive Conservative Prime Minister of Canada. George W. Bush issued a presidential directive, weeks before he left office in 2009, that stipulated the United States would protect the Arctic environment, conserve its biological resources and ensure the region’s economic development remain environmentally sustainable.

While American presidents have pushed for polar protection at the end of their tenures, they have only rarely included their Canadian counterparts – counterparts that control the vast majority of North American polar territory. This makes the recent agreement between Obama and Trudeau to protect Arctic land and maritime territory more striking since it only follows the bilateral example of Reagan and Mulroney to protect polar caribou herds migrating between the two countries in 1987. Ideological affinity between the two leaders, as well as a convergence of interests, is one factor explaining the emergence of the agreement. Canada and the United States have collaborated extensively on Arctic environmental protection in the Arctic Council, and enhanced environmental cooperation between Canada and the United States was a goal of the Stephen Harper government, ultimately unfulfilled. One factor that appears to link the two accords together is the personal friendship between the two countries’ leaders. Both Reagan and Mulroney, as well as Obama and Trudeau, established strong relationships through state dinners and bilateral summits that led to their deals. Indeed, some campaign professionals from Obama’s presidential campaigns provided expertise during Trudeau’s 2015 campaign to become Canadian Prime Minister. As such, it appears that polar protection is most likely achieved on the North American continent at the end of a president’s term in office and when the American president is a friend of the Canadian prime minister.

[1] United Nations, Framework Convention on Climate Change, Report of the Individual Review of the Annual Submission of Canada Submitted in 2010, FCCC/ARR/2010/Can http://unfccc.int/resource/docs/2011/arr/can.pdf.

Josh Caldon is a PhD Candidate at the State University of New York at Albany. His dissertation uses a historical institutionalist approach to explain the different postures of the United States, Canada and Russia towards the dynamically changing Arctic region. He also flies LC-130 “ski birds” for the New York Air National Guard and National Science Foundation in support of international polar scientific research.