Personnel is Policy: Tillerson, Trump’s Cabinet, and the Arctic 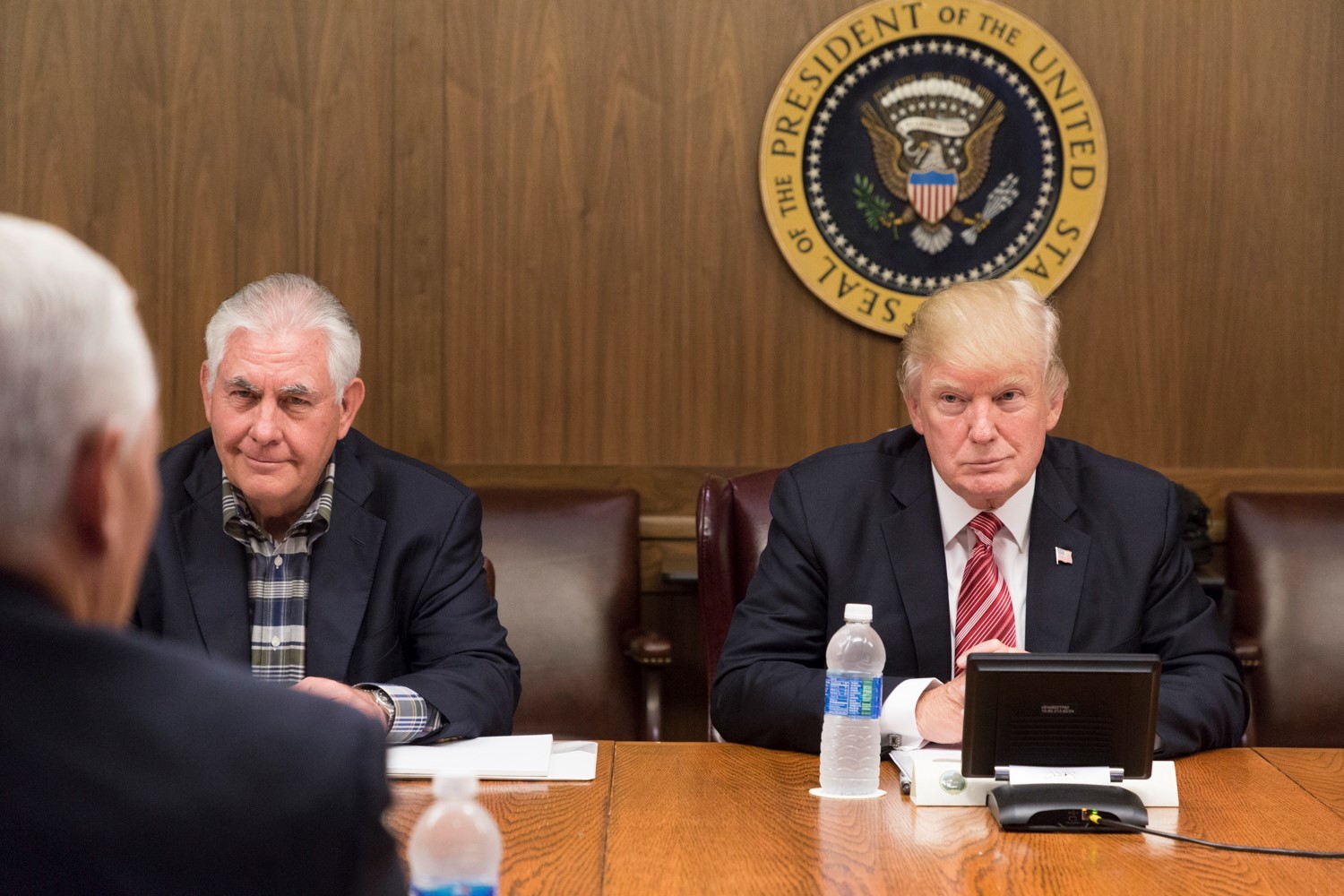 When the Arctic Council meets in Fairbanks, Alaska, for the final ministerial of the US chairship, the Arctic’s foreign and environmental ministers are likely to be met by a Secretary of State to whom the Arctic is no stranger. Last month, President-Elect Donald Trump nominated Rex Tillerson, CEO of ExxonMobil, as his Secretary of State. While Senate confirmation is not guaranteed because of concerns over Tillerson’s history of deal-making with Vladimir Poutin, if Tillerson is confirmed, his background from his ExxonMobil days will likely make him one of the most influential voices in the incoming administration for shaping the United States’ Arctic policy. Along with Trump’s nominee for Secretary of Interior, Representative Ryan Zinke, Tillerson will be in a strong position to influence how the Arctic will look in 2020.

Tillerson has worked at ExxonMobil since 1975, rising to CEO in 2006. Exxon has had a strong Arctic presence for years as a majority owner of Canada’s Imperial Oil, which has operated Norman Wells – Canada’s northernmost commercial field, where drilling began in 1920. ExxonMobil is also the largest of three owners of Prudhoe Bay on the north coast of Alaska. Since the turn of the century, Tillerson has expanded ExxonMobil’s presence in Russia’s near-Arctic through partnership with Rosneft. In particular, Exxon and Rosneft jointly co-own Exxon Neftegaz Ltd and its oil and natural gas operations in Sakhalin (Japan’s SODECO and India’s ONGC are also co-owners). Tillerson managed ExxonMobil’s Russian operations and helped secure the deal, leading to his promotion to CEO. And in 2011, Exxon agreed to a partnership with Rosneft to develop the East-Prinovozemelsky field in the Kara Sea. In 2013, the partnership was expanded to several more blocks across the Russian Arctic, but further cooperation was derailed by western sanctions imposed in the summer of 2014, after the Russian invasion of Crimea. Although ExxonMobil tried to push ahead despite sanctions, by the end of the year they were forced to put their work in Russia’s Arctic on hiatus.

Concerns have been raised about Tillerson’s nomination because of his friendly ties to Russia, including a 2013 award – the Russia’s Order of Friendship. Rex Tillerson has also vocally opposed the US sanctions on Russia, criticising US policy toward Russia. As an employee and CEO of ExxonMobil, Tillerson understandably prioritised the interests of his shareholders, and presumably, he will prioritise the interests of his administration and the American public as Secretary of State. In addition, under conflict of interest laws, Tillerson would be forced to divest himself of his shares in ExxonMobil and manage his wealth through a blind trust. However, even without financial ties to the energy industry as motivation, it is likely that his experiences working in the energy industry and cooperating with Russians will colour his views on how to best serve America’s interest in regard to Russia, sanctions, and other elements.

How will Rex Tillerson’s views on America’s interests impact the Arctic? The most obvious result will be either ending sanctions against Russia, or at least restructuring how they operate. Tillerson has argued that the sanctions, which block the transfer of advanced drilling technologies (especially for drilling shale formations and offshore fields), harm the American companies which would supply those technologies more than it harms Russia, which will still be one of the world’s largest energy exporters with or without these sanctions. His successful cooperation may also lead him to believe that Russia is more valuable to the US as a partner than as the target of sanctions.

Rex Tillerson’s background in the energy industry indicates that he will be sympathetic to the view that the extractive industries should take priority over environmental concerns. As Secretary of State, this likely means more favourability toward international agreements that reduce impediments to business interests; examples could include negotiating the Beaufort Sea boundary with Canada, opposing ratification of UNCLOS (as ratification would give the UN oversight over hypothetical US drilling or mining in international waters), or ending negotiations seeking indefinite fishing bans.

President Obama’s recent move to block offshore oil drilling in the US Arctic and the Northern Atlantic uses a technicality in a 1953 rule so that the Trump Administration will not be able to simply overturn the ban by executive action (although the Republican-controlled Congress can likely overturn the ban without trouble). Justin Trudeau simultaneously enacted a similar ban in Canadian Arctic waters, taking most of the North American Arctic out of consideration for drilling. The Canadian-US relationship will likely become more contentious over this agreement, as well President Obama and Prime Minister Trudeau’s March pledge to jointly protect the Arctic and reduce greenhouse gas emissions, which the Trump administration is unlikely to honour.

Ironically, while Rex Tillerson is hardly a green, he has one of the better records on climate change among the known nominees for Trump’s cabinet (admittedly a very low bar). While he was CEO of ExxonMobil, he paid lip service to concerns over climate change, expressed support for a carbon tax, and ended ExxonMobil’s practice of funding climate denial research. He is joined in at least having recognised the seriousness of climate change by potential future Cabinet Members General James Mattis and Congressman Ryan Zinke. Mattis, who has been tapped for Secretary of Defence, has supported efforts to reduce the military’s dependence on fossil fuels. Zinke, selected as Secretary of the Interior, has acknowledged that climate change is a problem which calls for “prudent” action, balancing environmental needs with protection for jobs in the coal industry.

As Secretary of the Interior, Ryan Zinke will be Tillerson’s counterpart for domestic Arctic issues, since Interior includes such agencies as the Bureau of Ocean Energy Management (BOEM), Bureau of Indian Affairs (BIA) and Bureau of Land Management (BLM), among others, which all play important oversight roles over America’s Arctic environment, economy, and people.

As the Secretary responsible for overseeing most of America’s public lands, Zinke has spoken for a compromise position: while he opposes privatisation or transfer to state control for federal lands and has defended the right of public access for recreational use, he supports increasing resource extraction on public lands and has consistently opposed regulations targeted at environmental protection or combatting climate change. Whether or not Congress overturns Obama’s ban on offshore drilling, Zinke’s Interior Department will likely not impose many restrictions on oil and gas drilling or mining, and may open up onshore blocks for drilling such as the Arctic National Wildlife Refuge (ANWR) or the National Petroleum Reserve Alaska (NPRA), both of which are in Northern Alaska.

Between Tillerson and Zinke, as well as other cabinet picks and campaign pledges, it is clear the Trump Administration will be very favourable to resource extraction in America’s Arctic, and will likely exert influence abroad to end blocks on resource development, such as Western sanctions on Russia’s Arctic drilling or Canada’s pledge to prevent offshore drilling in the Arctic and Atlantic. But the bigger question is how far the Trump Administration will go to subsidise Arctic activity over safer investments elsewhere. In particular, will the Trump Administration’s much-publicised infrastructure spending plan subsidise dredging deep-water ports in Northern Alaska, or promote fee-based icebreaker services? Until the basic economics of Arctic resource extraction are further fleshed out, a pro-industry regulatory atmosphere can only do so much. Will the Arctic be a high enough priority for the Administration to spend money on? That remains to be seen.

Robert Hammitt is Unit Lead of PRPI’s Maritime Environment Unit. He has a master’s degree in international relations and economics from Johns Hopkins University, with a concentration in Europe-Eurasian studies, especially Russian-Western relations in the Arctic. Rob has worked for years on polar and maritime issues, particularly with the Center for Strategic & International Studies’ Arctic Program and the Woodrow Wilson Center’s Polar Initiative, both in Washington, DC. Before pursuing graduate education, Rob worked as a research analyst for an environmental-economic consulting firm in Boston, where he examined the impact of environmental regulation on regional employment, and the challenges climate change poses for port, irrigation, and hydropower infrastructure.