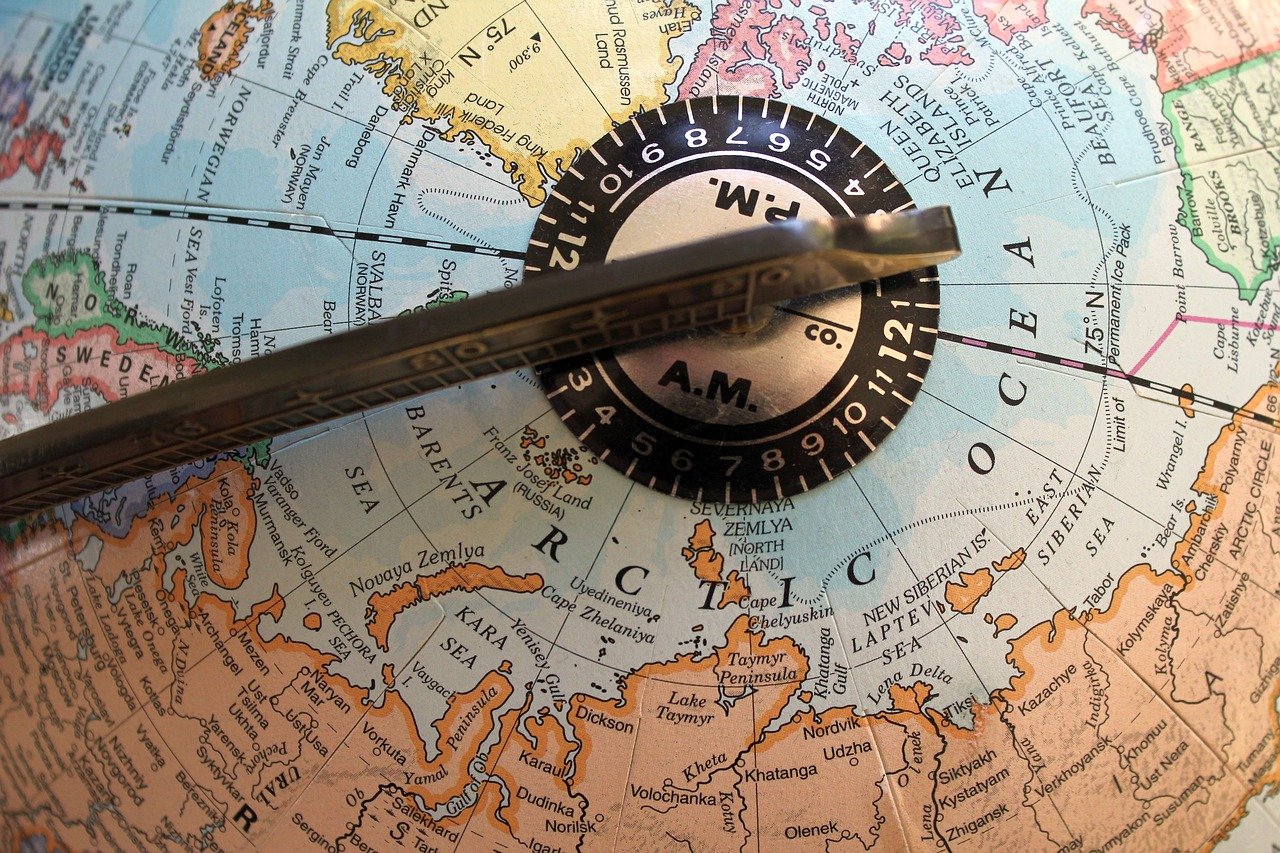 On 31 March 2021, Russia lodged two submissions with the United Nations Commission on the Limits of the Continental Shelf (CLCS) proposing an extension of its continental shelf in the Arctic Ocean. Prof Kamrul Hossain evaluates the status and consequences of the submissions in the light of the United Nations Convention on the Law of the Sea (UNCLOS).

On 31 March 2021, Russia lodged two submissions with the United Nations Commission on the Limits of the Continental Shelf (CLCS) proposing an extension of its continental shelf in the Arctic Ocean. The proposal, comprising the country’s second revised submission to the Commission, delineated an area extending to points near the North Pole and the exclusive economic zones (EEZs) of Greenland and Canada.[1] Like those before it, the submissions have sparked media and policy debates concerning Russia’s political ambitions and security infrastructure in the Arctic Ocean region.[2] Media reports have even occasionally questioned the lawfulness of its action,[3] albeit without presenting any legal justifications. Against this background, the following short article evaluates the status and consequences of the submissions in the light of the United Nations Convention on the Law of the Sea (UNCLOS).

Russia’s Submissions to the CLCS and the Recent Addenda

Extended Continental Shelf under the UNCLOS

After receiving a state’s submission, the CLCS evaluates it and issues recommendations. On the basis of these recommendations, the state can submit charts and other information to the Secretary-General of the UN that permanently describe the extended continental shelf; this demarcation is then final and binding. Where entitlements by coastal states adjacent or opposite to each other overlap, Article 76 suggests a straightforward solution: a delimitation agreement by the states involved. Coastal states with overlapping entitlements may also lodge joint submissions with the CLCS.

The UNCLOS refers to several geomorphological features of the ocean floor, including oceanic ridges, submarine ridges, and submarine elevations. It does not, however, define these. An oceanic ridge is a free-standing feature that is located on the deep seafloor and has geological characteristics different from those of the territorial landmass[9] and similar to those of the ocean floor. Hence, oceanic ridges do not constitute continental shelf. By contrast, a submarine ridge generally shares geological characteristics with the territorial landmass of a coastal state, thus qualifying as part of its continental shelf.[10] A submarine elevation, known as a seafloor high, is a natural component of a coastal state’s landmass. Its origin and geological features in their entirety share the characteristics of the state’s landmass,[11] and the formation thus constitutes a natural prolongation of the continental margin.[12] On submarine elevations, the continental shelf may extend indefinitely, provided the depth of the water column remains less than 2,500 meters.

Half of the fourteen million square kilometers of the Arctic Ocean is surrounded by a range of legally established continental shelves, 200 nautical miles in extent and belonging to the five coastal states. Beyond that point, measuring the outer limits of the continental shelves requires evaluating the geomorphological characteristics of the ocean floor. The Arctic Ocean floor features three major ridge systems: the Alpha-Mendeleev Ridge, the Lomonosov Ridge, and the Gakkel Ridge. Both the Lomonosov and Alpha-Mendeleev Ridges pass through the ocean from the margin of Siberia to that of Greenland and North America.[13]

All Arctic coastal states except the United States (a non-party to the UNCLOS) have made submissions for extension of their continental shelves beyond 200 nautical miles in accordance with the procedures set out in Part VI of the UNCLOS. Russia’s submissions include both the Alpha-Mendeleev and the Lomonosov Ridges. The scientific basis for their inclusion, according to Russia, is that these ridge systems constitute submarine elevations and are thus natural prolongations of its continental margin. Similar arguments[14] are found in submissions made by Denmark (Greenland) in 2014 and Canada in 2019. While the former extends from Greenland’s EEZ across the North Pole and into Russia’s EEZ, the latter reaches the North Pole but not the Russian EEZ.[15] 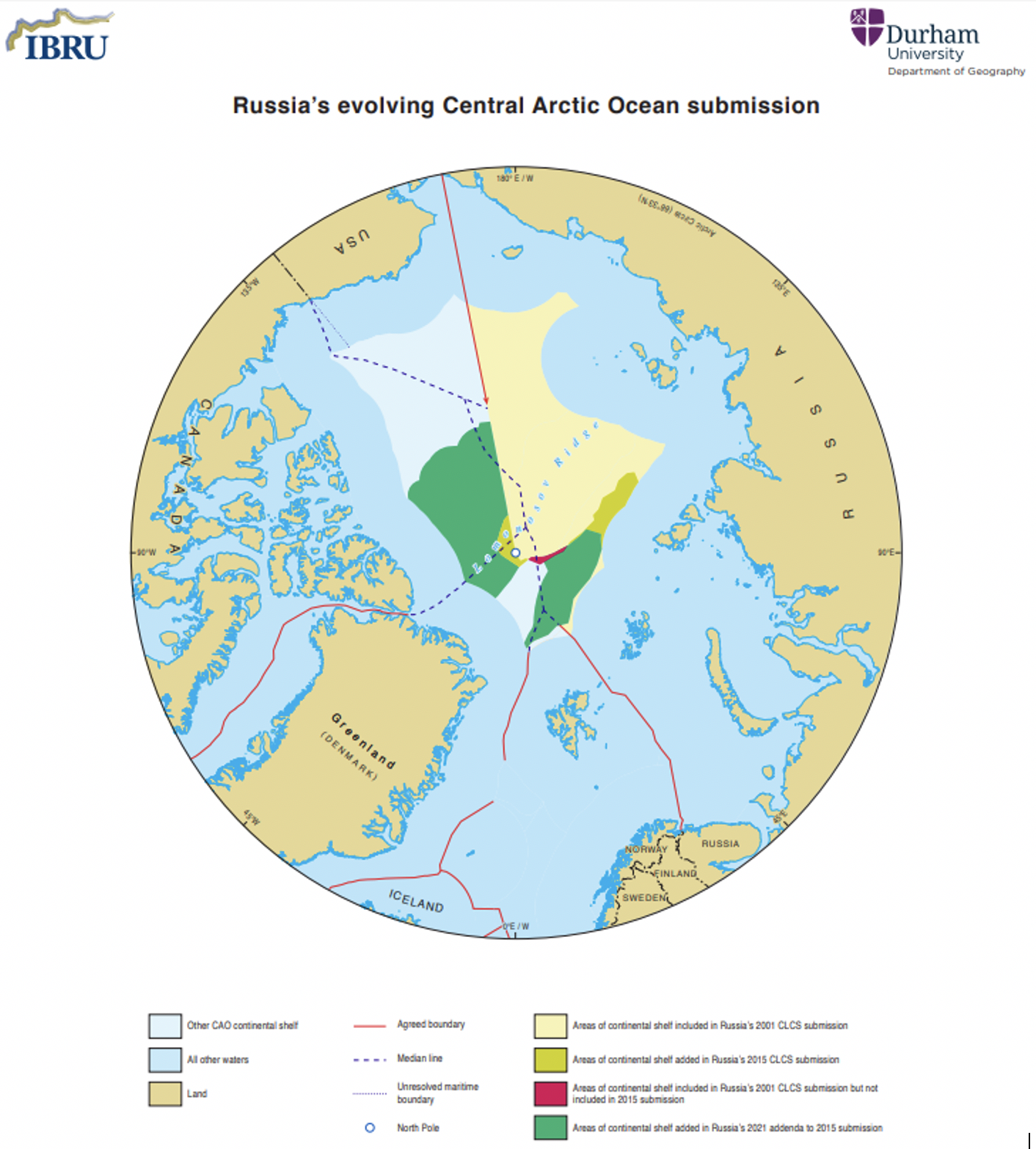 The extensions proposed by Denmark, Russia, and Canada all overlap. In such a case, the maritime boundaries are determined through the UNCLOS delimitation process, which the states themselves initiate given that Article 76(10) and Article 9 of Annex II suggest separation of the Commission’s work from the process of delimitation. Such a process, set out in Article 83 of the Convention, was successfully applied when Russia and Norway concluded such an agreement in 2010.[16] Evidently, there is a consensus among all the Arctic coastal states concerning the procedure for overlapping submissions: the states have consistently confirmed that they do not object to the CLCS considering such submissions,[17] for example, by making recommendations for joint submissions.

While every state with an Arctic coastline may extend its continental shelf, the extension does not have legal status unless the CLCS provides clear recommendations affirming the scientific validity of geological data properly presented before it.[18] In public debates, the term “claim” is often used to refer to coastal states’ presentations of scientific data, but the word is misleading. It suggests that the coastal state, in this case Russia, simply “claims” the area as its continental shelf. In fact, entitlement to a proposed extension of the continental shelf is the outcome of a procedure, not a declaration. It begins with a state presenting evidence of a natural prolongation of its continental margins as defined by the UNCLOS. It is complete when the CLCS considers the submission, provides recommendations for determining the limits of the continental shelf, and the limits of the shelf are redrawn by the state to reflect the Commission’s recommendations. Where there are no overlapping submissions, states themselves delineate the shelf; where there are overlapping entitlements, they delimit it.

Russia’s recent submissions build on the latest available evidence indicating that the geomorphological features of the Arctic Ocean floor are similar to those of the country’s continental landmass. The submissions are part of a coherent legal process that Russia initiated in 2001. They will not translate into legal entitlements until the CLCS has given them due consideration and issued recommendations suggesting either of the two processes noted above, delineation or delimitation. Given that Russia’s most recent submissions add extensions resulting in overlapping entitlements, the likely outcome of the process will be delimitation; that is, the states involved will initiate the delimitation process, with the CLCS issuing recommendations. All things considered, Russia’s action indicates its commitment under international law to follow the appropriate legal process, that requiring presentation of scientific evidence to the CLCS.

Speculation about Russia’s political ambitions and the lawfulness of its actions in lodging submissions for an extension of its continental shelf is often driven by the fact that the Arctic Ocean bed contains extensive hydrocarbon resources. There is an assumption here that once its extended continental shelf is duly established, Russia will grab these resources, given that a coastal state enjoys a sovereign right to exploit living and non-living natural resources in its continental shelf. However, “sovereign rights” are not tantamount to sovereignty, as the concept applies to land territories; the water column superjacent to the extended continental shelf is the high seas, where all states have particular legal entitlements. What is more, the U.S. Geological Survey has estimated that most of the hydrocarbon resources underneath the Arctic Ocean are located under the coastal states’ undisputed 200 nautical miles of the continental shelf.[19] On balance, the speculation that has been voiced in response to Russia’s submissions has no legal basis. It is science that analyzes the undersea structures and their geological features and informs the decision of the CLCS to support or reject an area as part of a state’s continental shelf. Legal limits are set on the basis of scientific evidence and following the provisions of the UNCLOS, as validated by the CLCS.

This article was originally published in ASIL Insights Volume: 25, Issue: 8 and has been reproduced with permission.

[4] Tomasz Górski, A Note on Submarine Ridges and Elevations with Special Reference to the Russian Federation and the Arctic Ridges, 40(1) Ocean Dev. & Int’l L. 51 (2009).

[10] See generally Harald Brekke and Philip A. Symonds, The Ridge Provisions of Article 76 of the UN Convention on the Law of the Sea, in Legal and Scientific Aspects of Continental Shelf Limits 180-190, (Myron H. Nordquist et al. eds., 2004).

[16] Treaty between the Kingdom of Norway and the Russian Federation concerning Maritime Delimitation and Cooperation in the Barents Sea and the Arctic Ocean (English translation), https://www.regjeringen.no/globalassets/upload/ud/vedlegg/folkerett/avtale_engelsk.pdf.

Kamrul Hossain is a Research Professor, and Director of Northern Institute for Environmental and Minority Law (NIEM), at the Arctic Centre of the University of Lapland. He is also the lead of the Thematic Network on Law of the University of the Arctic. By training, Hossain is a researcher in the field of international law. He has been working on a diverse range of Arctic issues for almost a decade. The main focus of his research currently lies in international environmental law that applies to the Arctic, as well as in human rights law, in particular, concerning the rights of the indigenous peoples, again with a focus on the Arctic. Over the years, Hossain has published extensively in all areas of Arctic governance (climate change; marine environment, maritime de-limitation and law of the sea; human activities in the Arctic such as shipping and resource extractions including mining and, onshore and offshore oil and gas developments; marine bio-diversity conservation; and human rights and human security dimensions applicable to the Arctic) highlighting legal, institutional and policy perspectives.