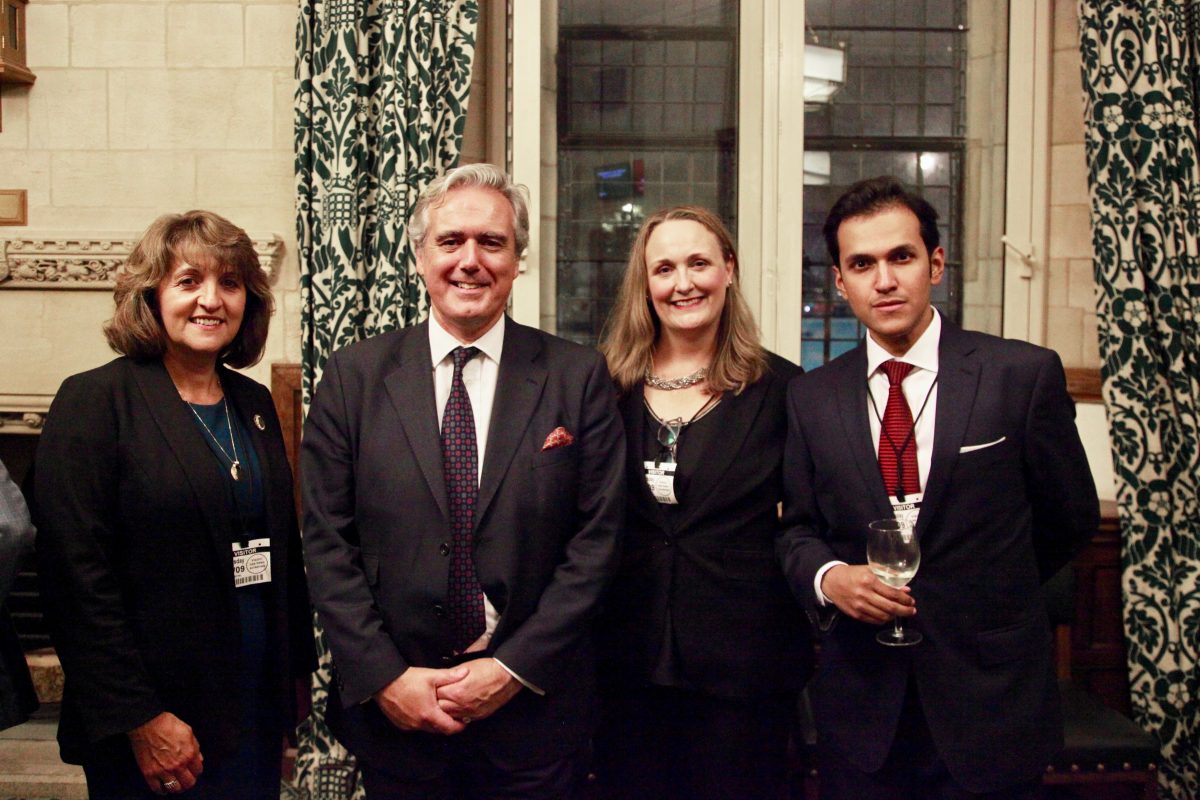 Commissioner Denise Garland of the Maine Department of Economic and Community Development; UK Regional Envoy to the US, Mark Garnier MP; Director of the Maine North Atlantic Development Office (MENADO), Dana Eidsness; and Director of Polar Research and Policy Initiative, Dr Dwayne Menezes at the ‘Maine and the UK’ reception in the Palace of Westminster on Thursday, 6 September 2018.

In September 2018, Polar Research and Policy Initiative (PRPI) was pleased to welcome a trade and outreach mission from the US State of Maine and join forces with the Maine North Atlantic Development Office (MENADO) in hosting a ‘Maine and the UK’ reception in the Palace of Westminster. In his opening remarks, PRPI Director Dwayne Menezes noted, “Since its inception, PRPI has seen the North Atlantic not as a geographic gap between various friendly states, but as a crucial bridge and connector between them, and has welcomed initiatives aimed at increasing trade and investment between markets of the North Atlantic region and, thereby, at developing the North Atlantic into a valuable zone for economic cooperation. Likewise, it has long seen the State of Maine as having set the gold standard when it comes to initiatives to support North Atlantic economic cooperation, particularly with the formation of MENADO at the Maine International Trade Center in 2013 and its proactive and sustained contribution in this regard. As a think-tank committed to strengthening the Special Relationship between the UK and the US, we are honoured and delighted to welcome such a distinguished delegation from Maine and are confident that the mission shall usher in a new age of closer and stronger cultural and commercial ties between the UK and Maine.”

The recent Maine trade and outreach mission to the United Kingdom and Ireland was organised by MENADO and was led by Commissioner Denise Garland of the Maine Department of Economic and Community Development. The mission included the President of Maine International Trade Center and State Director of International Trade, Wade Merritt; the Director of MENADO, Dana Eidsness; the Director of Defense Industry Maine and International Trade Specialist, Thomas Conley; the Assistant to the Commissioner of the Maine Department of Agriculture, Conservation and Forestry, Melissa Macaluso; and industry leaders from Maine. Although the Governor of Maine, Paul R. LePage, could not join the delegation, the Governor’s Press Secretary, Julie Rabinowitz, accompanied the mission. The delegates’ itinerary in the UK included meetings at the US Embassy in London, the ‘Maine and the UK’ reception in the Palace of Westminster, a meeting and afternoon tea with the Lord Mayor of Leeds at Leeds Civic Hall, and a stop at the Leeds International Beer Festival where 60-70 Maine breweries had come together to promote the Maine Beer Box. A custom-built, 40-foot, refrigerated shipping container that landed in Leeds earlier that week, the Maine Beer Box boasts 78 beer taps and a self-contained drought system capable of delivering beer anywhere by land or sea. The delegates’ itinerary included business meetings, group events and unique cultural opportunities designed to help Maine companies expand their business development networks in these important markets.

PRPI was pleased to co-host the ‘Maine and the UK’ networking reception in the Palace of Westminster on Thursday, 6 September 2018, with a view to celebrate Maine’s business relationships in the UK, to strengthen existing relationships and build new ones, and to explore opportunities for closer commercial and cultural links between the UK and Maine in the context of a robust UK-US Special Relationship. PRPI is thankful to the sponsoring MPs – Andrew Rosindell MP (Conservative), Member of Parliament for Romford and now the Prime Ministerial Trade Envoy to Tanzania, and Keith Vaz MP (Labour), Member of Parliament for Leicester East and formerly a Minister of State within the Foreign and Commonwealth Office – for their support. Among the guests in attendance were Mark Garnier MP, the UK Regional Envoy to the United States; officials from the Department of International Trade, the Scottish Government, Highlands and Islands Enterprise, City of London Corporation, the US Embassy and US Commercial Service, and the Government of Quebec; senior executives from Lloyd’s of London, RockStep Solutions, Rolls Royce, Ramboll, IBT Online and Unum Group; the eminent marine, trade and energy lawyer, Michael Kingston; and several industry leaders and academics. Both Commissioner Garland and Mr Garnier, who addressed the delegates, reiterated the value of the UK-US Special Relationship at the federal as well as the state levels, highlighted the opportunities for closer and stronger ties between the UK and Maine, and praised the trade mission and the Maine Beer Box as examples of initiatives that would facilitate greater cooperation.

Please see the gallery below for photographs from the reception, courtesy of Tom Huntingford of Superfolk Films.

Catholic Bishops in England, Wales, Scotland and Ireland call for end to violence in Ukraine