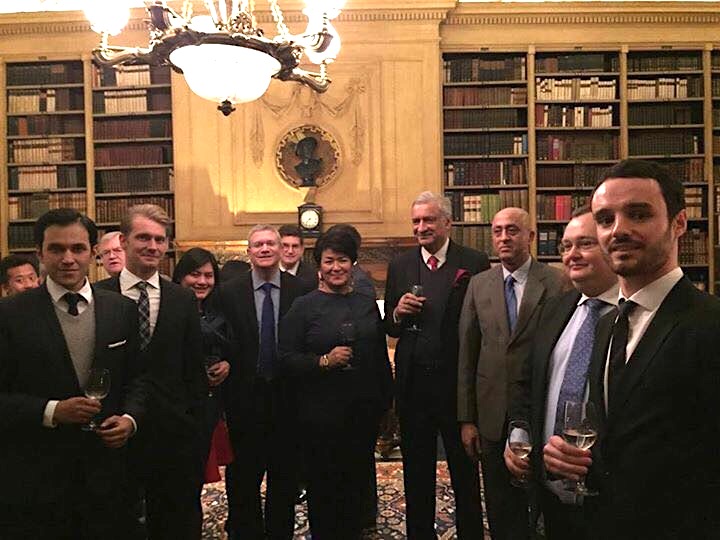 London, UK: On Thursday, 18 February 2016, the Travellers Club in London, which has counted numerous statesmen, diplomats and explorers as its members, provided the most befitting setting for the reception and dinner hosted by Dr Dwayne Ryan Menezes and Christophe Milhères to mark the private launch of the new ‘Polar Regions’ think-tank, Polar Research and Policy Initiative (PRPI).

Among the distinguished guests in attendance were Aleqa Hammond, the former Prime Minister of Greenland; Andrew Rosindell, Member of Parliament for Romford who founded and formerly chaired the All-Party Parliamentary Group for Polar Regions (Arctic and Antarctic) in the UK Parliament and who now serves as Chair or Vice-Chair of the APPGs on Canada, Denmark, Faroe Islands and UK Overseas Territories; and Donald Lamont, the former Governor of the Falkland Islands who currently serves as Chairman of the UK Antarctic Heritage Trust.

They were joined by HE Dr Kamalesh Sharma, the outgoing Secretary-General of the Commonwealth; Capt. Ashok Mahapatra, Director of the Maritime Safety Division of the International Maritime Organization; and Stefan Asmundsson, President of the North East Atlantic Fisheries Commission. Also in attendance were Atli Mar Sigurðsson, Deputy Head of Mission of the Embassy of Iceland in London; Matilda Lee, Assistant Director of the Taipei Representative Office in the UK; Jock Wishart, the polar explorer; TJ Young, President of the UK Polar Network; and Dr Mika Mered, CEO of the London-based POLARISK Analytics and President of the French Polar Cluster.

In her keynote address as the guest of honour, Ms Hammond noted:
“It is a privilege to be here in London, to launch PRPI and to represent my nation, Greenland. We might be one of the smallest nations in the world, but we are also one of the greatest. Our people, the Inuit, have successfully survived for centuries in a harsh environment, adapting to changes, while other civilisations came to Greenland and disappeared. Today, Greenland possesses more than ever a perfect balance between tradition and modernity. We are open to the world; we are highly connected to the Internet; and most of us even have a Facebook account. Greenland has never been more on the map than today, and there is every reason for the United Kingdom and Greenland to be better friends and engage in greater dialogue and cooperation.”

Reflecting the people-centred appoach PRPI shall take towards the Arctic, Ms Hammond focused on the past, the present and the future of the Inuit; and the opportunities and challenges presented by a changing Arctic.

Andrew Rosindell MP proposed the vote of thanks to the keynote speaker for her illuminating speech and also thanked the founders, Dr Menezes and Mr Milhères, for taking the lead in setting up “such a wonderful initiative, which will allow for greater dialogue between our countries, and strengthen the friendship that we have with Greenland and the Arctic.”

Laura Hanning Scarborough, former Vice-Chair of the UN Adaptation Fund who shall oversee projects undertaken by PRPI relating to the natural environment, observed, “The Arctic is profoundly affected by climate change. Now that we have the Paris climate agreement, it is important to work on implementing it. The launch of PRPI is very timely. The initiative can play an important role in bringing together knowledge and people in nurturing opportunities in the region.”

The Polar Research and Policy Initiative (PRPI) is a London-based international, independent, non-partisan think-tank founded by Dr Dwayne Ryan Menezes and Mr Christophe Milhères in September 2015 that focuses on the Arctic and the Antarctic. PRPI aims to raise the profile and understanding of the Polar Regions in the UK and across the Commonwealth; increase and sustain the scholarly, cultural, commercial and political engagement of the UK and major Commonwealth member states with the Polar Regions; and help address some of the toughest political, social, economic and environmental challenges facing polar peoples and places.

PRPI is an independent organisation that engages with the policymaking process nationally and internationally as a civil society actor. It is not an initiative of the UK Government or the Commonwealth Secretariat.