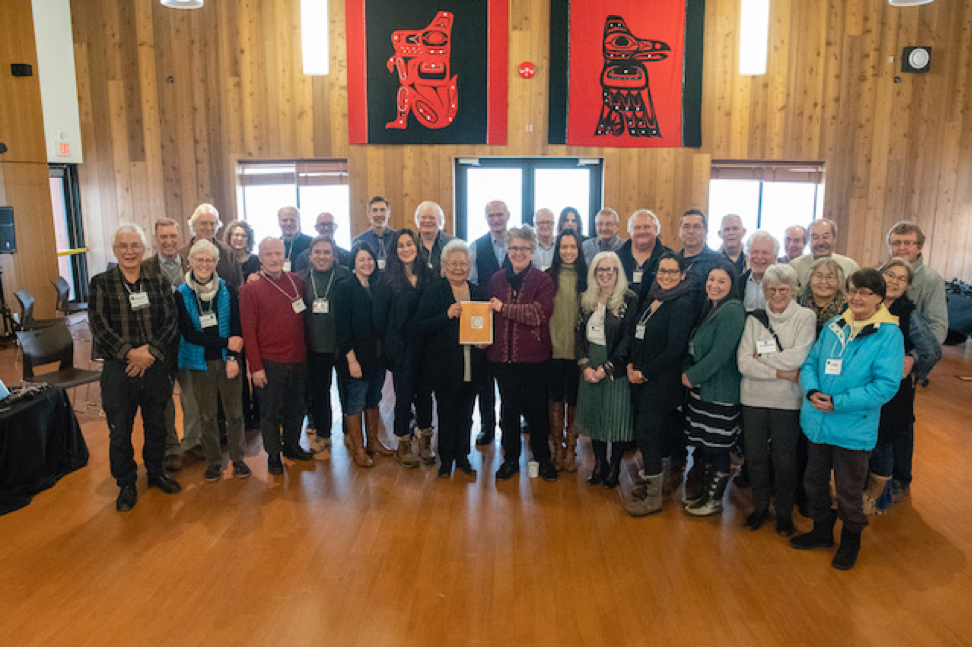 As the Territory’s minister responsible for Yukon First Nations treaty negotiations and the Umbrella Final Agreement of 1990, I have been haunted by two facts.

The 1789 “We the people…” Constitution of the United States, the most powerful of nations, is only 12-pages long.[i] It is a statement of high principles, well written and read at some point by every student in every school in that country.

By contrast, Yukon’s Umbrella Final Agreement between Yukon First Nations, the Government of Canada and the Yukon Territory runs to 292 pages, which means that few people will ever read it. Consequently, few students have any idea of the principles behind this foundation accord for 21st-century Yukon.

In time, this small readership could become a huge problem. Years from now, Canadians might elect governments determined to undermine the Yukon treaty, and if few Yukoners have ever studied the UFA’s detailed text and even fewer understand its core principles, who then will defend the ideas and values it embodies?

A generation after the negotiation of the agreement, hardly any of the people employed in its implementation had any involvement in its negotiation. In other words, they may have no idea of the three parties’ intentions. That too could be a problem.

This problem is not unique to the Yukon. Glassco Fellow Heather Bourassa has written about implementation challenges with NWT’s Sahtu Dene treaty and “a lack of communication between leadership and the Community.”[ii]

Based on the example of the US Constitution, I now wish that, after twenty years of negotiations, before proceeding to the final agreement stage, the three parties to the Yukon land claims agreement – a document now protected under Section 35 of the Canada’s Constitution Act – had shown the wisdom to lock ourselves up in a mountain retreat for a few days to draft a preamble to the UFA describing the underlying principles of the agreement we had just reached.

Older Yukoners may remember how radical the agreement seemed at the time, or that Yukon’s Self-Government Agreements were the first of their kind in Canada. Thirty years later, parts of the UFA have in some ways been overtaken by both court decisions and public policy reforms. Nevertheless, the principles agreed to by Yukon First Nations, Canada and Yukon remain in force. The New Testament is an update but the essential Ten Commandments were embedded in the Old Testament.

Before it was too late, I wondered if it might be time that the UFA’s three teams of surviving negotiators met again and document its key principles, shared values and common goals. To my surprise, many Yukoners shared my concern, among them former Yukon First Nations Grand Chief Judy Gingell, the current Grand Chief Peter Johnston, former federal negotiators Tim Koepke and Elizabeth Hanson, and also Yukon negotiators Barry Stuart and Doug McArthur, among others.

As a result, we invited the veteran negotiators – a finite group – to gather at a round table in Whitehorse on 18-19 January  2020 to discuss and draft a short Plain-English statement of the UFA’s core ideas. Of course, the UFA authors from 1990 would lead the discussion. Our purpose was not to renegotiate the UFA or invent new “principles” but rather to discover or rediscover those at the heart of the agreement.

Yukoners need a document that every elementary school student can read and understand, so another set of participants will be the note-takers or “scribes” who will hopefully craft a First Principles statement that echoes the US constitution in its brevity and wit. The scribes’ duty will be to respectfully listen, faithfully record and skillfully edit participant ideas. To avoid academic, bureaucratic and legalistic prose, we have recruited for scribe’s team journalists who actually covered the 1990 UFA negotiations.

This First Principles Project is a private, non-government, invitation-only initiative. Every participant has volunteered his or her time and talent to this labour of love. Three former negotiators are even flying to Whitehorse for this event at their own expense.

On a few short pages, we hope to capture the UFA’s shared values, high principles and core ideas about land, sustainability, governance and the funding for education, health and justice programs. We may not complete the task in a single weekend. Still, we hope that the gathering produces a Draft Statement of UFA First Principles of enough quality to guarantee wide circulation and much constructive comments from its Yukon readers.

Our ultimate objective will be a short, highly readable statement of UFA First Principles, not a legal document but an educational aid for this generation’s students, and hopefully those of the next.

Across Canada, rather than beginning with fat binders full of manipulative mandates, future negotiations between Government and Indigenous Nations might start with honest and open exchanges about first principles.

In the Yukon, we cannot yet know if our weekend gathering will be a success but, afterwards, we will be happy to report its outcomes to any who inquire.

It is never easy to organise an unfunded volunteer event but forty-below-zero weather made things more difficult. Air Canada cancelled flights but Air North, Yukon’s regional carrier, came through. Some older invitees from remote communities were reluctant to venture out on icy roads. Yet, forty volunteers: former chiefs, chief negotiators and scribes arrived on time a ready to go to work.

Stanley Njootli opened the gathering with a prayer in Gwichin. Tim Koepke read out a long list of negotiators who had passed on over the last thirty – a sharp reminder of the urgency of our task – and the plenary circle stood for a minute’s silence in their honour. Participants in the circle then introduced and re-introduced themselves, and the organisers explained the proceedings.

According to their varying interests, everybody would join one of four Breakout Groups. Breakout chairs were paired to represent both Indigenous and government perspectives: LAND co-chairs, Stanley Njootli from Vuntut Gwitch’in and former federal negotiator Kathleen Wood, with scribes, Jim Butler and Jocelyn Joe-Strack; GOVERNANCE co-chairs, former federal self-government negotiator Liz Hanson and Lawrence Joe from Champagne Aishihik, with scribes, Arnold Hedstrom and Chuck Tobin; ECONOMY co-chairs, Mary Jane Jim of Champagne Aishihik and former Yukon chief negotiator Doug McArthur Relationships, with scribes, Keith Halliday and Nadia Joe; RELATIONSHIPS co-chairs, Yukon chief negotiator Barry Stuart and Albert Peter from Nacho Nyak Dun, assisted by scribes, Vic Istchenko and Rhiannon Klein. Two “scribes” would assist each group, so that, at any point, one could be writing and the other editing.

Most of the invited scribes were working journalists who had reported on UFA negotiations in the late-1980s, but this older male group was supplemented by three young female scholars with interests in Indigenous issues. Among the virtues of journalists are their ability to write plain English but also to respect tight deadlines. This was evident on Saturday morning when participants arrived at 7:30am to see that Lindsay Staples, the leader of scribes, was already briefing his team.

Before lunch, the chairs provide interim reports to the plenary circle. After a lunch sponsored by Grand Chief Peter Johnston and the Council of Yukon First Nations, which absorbed all our facility costs, participants returned to a Breakout Group. Later in the afternoon, the chairs provided further progress reports.

By early Sunday morning, it was apparent that, despite the high quality of Breakout Group reports, their stylistic differences would require heroic efforts to synthesize them into a single document, and an editors’ group came together for this chore.

Late Sunday morning, the younger scribes expressed concern that the elders were too focused on the past. So, Jocelyn Joe-Strack, with Rhiannon Klein as her note taker, led a plenary discussion about the UFA’s future, which informed the final DRAFT FPP statement.

By mid-afternoon on Sunday, the co-chairs, scribes and editors had produced a nine-page document. After some clean-up, we proposed to make this document public.

Yukon’s Umbrella Final Agreement took the best part of twenty years to negotiate, so the text produced over two days by the 40 @ -40° group is bound to contain imperfections. But nobody at the Kwanlin Dün Cultural Centre that weekend thought we had penned the last word on the Yukon Treaty. Rather, we would label document a “work in progress” or Draft for public comment and discussion. So, to replace a largely unreadable 292-page legal document, Yukoners now have a short readable educational aid for this generation of Yukoners and the next.

You can read the work-in-progress First Principles Project Report here.

[i] The original US Constitution, beginning with the declaration “We the People” articulates principles in seven articles: the separation of powers between the legislative branch (Article 1: Congress and Senate), the Executive (Article Two: President) and (Article Three: the courts, including the Supreme Court. Articles Four, Five and Six define American federalism. Article Seven outlines ratification procedures. Since coming into force in 1789, the United States has amended the Constitution 27 times to meet the evolving needs of a modern nation state.

Tony Penikett spent 25 years in public life, including two years at the Canadian House of Commons as Chief of Staff to federal New Democratic Party Leader Ed Broadbent; five terms in the Yukon Legislative Assembly; and two terms as Premier of Canada’s Yukon Territory. His government negotiated settlements of Yukon First Nation land claims; passed pioneering legislation in the areas of education, health, language; and organised Yukon 2000, a unique bottom-up economic planning process. After serving as Premier of the Yukon, Penikett acted as Senior Aboriginal Policy Advisor for the Premier of Saskatchewan (1995-97) and Deputy Minister for Negotiations, and later Labour, for the Government of British Columbia (1997-2001). He is the author of three books, Breaking Trail: A Northern Political Journey (Victoria, BC: Trafford, 2004); Reconciliation: First Nations Treaty Making in British Columbia(Vancouver, BC: Douglas & McIntyre, 2006) and Hunting the Northern Character (Vancouver, BC: UBC Press, 2017), and two films, The Mad Trapper (BBC TV/Time Life Films) and La Patrouille Perdue (ORTF France). As a mediator and negotiator, Penikett has worked on devolution in the Northwest Territories, Nunavut and Yukon. He has lectured on the history of aboriginal treaty negotiations at Simon Fraser University, Queen’s University and the University of Washington. In 2013, Penikett became Fulbright Visiting Research Chair in Arctic Studies at the Henry M. Jackson School of International Studies at the University of Washington. In September 2014, Simon Fraser University’s Public Policy School appointed him visiting professor, and he now serves as Senior Associate at the Morris J Wosk Centre for Dialogue there. Penikett serves as a Mentor for the Walter & Duncan Gordon Foundation’s Jane Glassco Northern Fellows, Trudeau Mentor at The Pierre Elliott Trudeau Foundation and member of the Advisory Board at Polar Research and Policy Initiative.