Donald Trump looks over his shoulder at us, the smallest smile visible: Person of the Year. It has undoubtedly been a year of political upheaval. Despite running a campaign that was marred with accusations of sexism, xenophobia and racism, Trump took the White House, Senate and House of Representatives. Before Trump, however, was Brexit. Many column inches have been dedicated to the similarities between these transatlantic votes, with special attention given to those “left behind”. So great are these events that Nigel Farage has labelled 2016 the ‘year of the big political revolution’, just shy of Russia’s centenary. Indeed, those involved are calling this a global movement, including the likes of Marine Le Pen and Rodrigo Duterte. What is most strikingly similar between these politicians and movements is an inward, nationalist gaze.

It is not surprising then that Trump has railed against NATO, Duterte is considering leaving the ICC, and Farage and Le Pen wish to see the end of the EU. In this mood of “what’s best for us”, the Paris Agreement is at risk. On his campaign trail, Trump said he would “cancel” the deal, while Duterte called it “stupid” and “crazy” before, admittedly, ratifying the deal under pressure. It has been said many times that we do not know how Trump will act when in office. However, the appointments of Rex Tillerson, Rick Perry and Scott Pruitt leave little hope for those concerned about global warming and environmental health.

Trump’s election and the Brexit vote were a great surprise to many, going against the grain of an established political order. What explains these supposedly anomalous results? Perhaps an electorate that has experienced wages stagnate and fall, precarity increase throughout the labour market, and state spending consolidate ever further grabbed upon any offer of change? Perhaps the Clinton and Remain campaigns were run terribly? Perhaps half the electorate are racist? Perhaps it was swung by all this post-truth politics, the mountains of fake news? After all, fake news is the ‘defining challenge of the 21st century’, according to one Guardian commentator.

Meanwhile, in the Arctic, we face the true defining challenge of the 21st century. In the wake of Trump’s victory, late November saw temperature anomalies of 20⁰C compared to the recent average (1981-2010) in the Arctic. For context, with a similar anomaly, London would be pushing towards 30⁰C this December. These Arctic temperatures are bewildering, and this is, unfortunately, not a blip. Looking at the average surface air temperature for November, we see anomalies of around 10⁰C in the Arctic compared with the recent average. Looking at recent data, this trend is sustaining into December.

This warmth has affected the formation of new sea-ice in the Arctic, stunting the winter freeze-in. Earlier in 2016, we saw the second lowest levels of sea-ice around the North Pole, trumped only by the levels of 2012. However, since the summer low, we have seen this year’s extent deviate from the curves of previous years, logging the lowest October and November levels on record. This has left the Arctic with a sea-ice level just under 2 million km2 lower than the 1981-2010 average. That equates to a Mexico of sea-ice amiss. 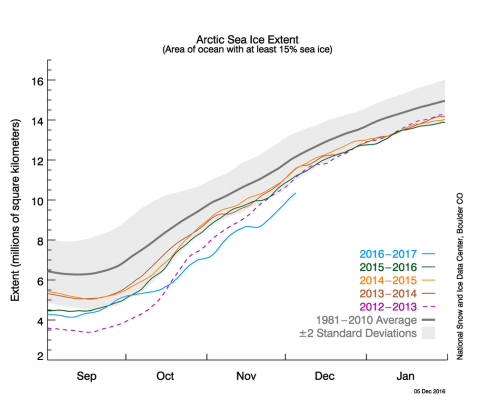 If we consider Antarctic sea-ice as well, we see that the overall extent for the globe is 3.84 million km2 lower than the recent average. That’s an India’s worth of ice missing from the Arctic and Southern Oceans. Again, the likely cause is the anomalously high temperatures that were around Antarctica in November, enhancing the rate of melting in the Southern Ocean. Worryingly, this goes against the trend of sea-ice decreasing in the Arctic while increasing in the Antarctic that has been noted for the past 30 years. Presently, both are decreasing. 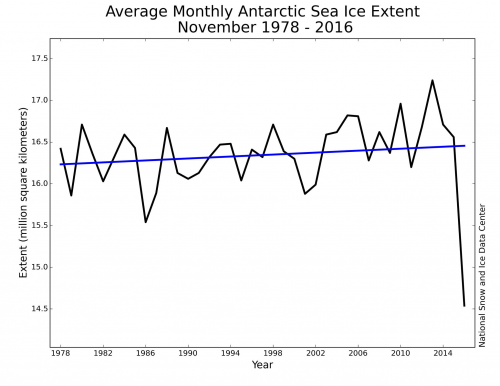 It must be noted that the dynamics of Arctic and Antarctic sea-ice formation and melting are very complex, and we can’t extrapolate these trends from the short-term into the long-term. For example, after the Arctic sea-ice low of 2012, the figures rebounded in 2013. However, like the Arctic sea-ice extents of 2007 and 2012, the levels we have experienced this year can be thought of as a step towards an ice-free Arctic, each of these years creating a new normal for the Arctic. This trend is echoed in the Arctic sea-ice volume, which exhibits a rate of decline a factor greater than sea-ice extent. Scientists have previously estimated that it will take three more loss events, like those of 2007 and 2012, to bring an ice-free Arctic. Perhaps 2016 has taken us another step closer. 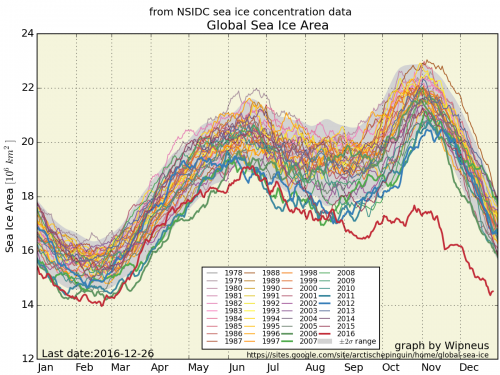 Karl Polanyi spoke of three fictitious commodities: labour, land and money. He believed that once these three essentials were fully commodified, i.e. their social value is replaced solely by market value, our societies and world would be endangered. It can be argued that we are presently experiencing the full commodification of all three: the globalised labour market encourages a race to the bottom and increasingly precarious practices; the financial crisis, the product of M -> M’, is still felt in the resulting austerity and an unreformed sector; and each year the Earth gets hotter, our soils get thinner and less fertile, the culminations of our unsustainable consumption embolden. As such, perhaps the elections of Trump and the vote for Brexit can be understood through the commodification of money and labour. Ironically, if we look at appointments and listen to whispers so far, these results may further us along Polanyi’s road to ruin.

It is confusing and unnerving. With 2016 coming to an end, there is a sense we stand at a crossroads, unsure as to where each road leads. The dichotomy of right and left seems to be blurring, with one of open and closed becoming bolder at home and abroad. It is strange yet familiar, shocking yet predictable; a psychological and emotional space best excavated by David Lynch. As in the opening scenes of Blue Velvet, it is as if we are delving into the mud, forcing us to refocus on the nationalism and xenophobia that buoyed the Trump and Brexit votes. Like the dirt, have these moods and sentiments always existed, waiting to be unearthed? Or is this a new phenomenon? Perhaps that’s why these historical comparisons feel so vapid, why the sense of foreboding looms so large? We feel as if we should know the answers and still they remain enigmatic, to be guessed at, to be wished for.

In the background, adding depth and despair to this foreboding, is global warming. This year, the year of political upheaval, will log the hottest global temperatures on human record, breaking the previous records of 2015 and 2014. According to the World Meteorological Organisation, it will show temperatures 1.2⁰C above pre-industrial levels, just 0.3⁰C short of the target set only last year in Paris. Looking at these past three years, the rate of change is growing, as if the warming is accelerating: 0.74⁰C, 0.9⁰C, 1.2⁰C. It is shocking yet predictable. Ed Hawkins’ spiralling infographic captures this mood, allowing us to visualise this warming as a disintegration, an unravelling; we are speeding towards those thick, red, catastrophic lines of 1.5 and 2⁰C.

Watching the momentum of time’s line grow, it’s hard not to think that perhaps Polanyi was correct.

David Lee Astley serves as Associate within the Natural Environment Unit at Polar Research and Policy Initiative. He is a recent graduate of the University of Oxford, where he read Earth Science. At university, his academic focus was on climatology, past and present, but he is now concentrating on contemporary climate change. He is especially interested in the interactions that global warming produces between the climate system, environment and societies around the world. David also has a keen interest in politics and culture, especially film, visual art and literature, and is fascinated by artists’ reactions to global warming. The importance of the Polar Regions in both the climate system and how we understand global warming is what encourages his work for Polar Research and Policy Initiative.