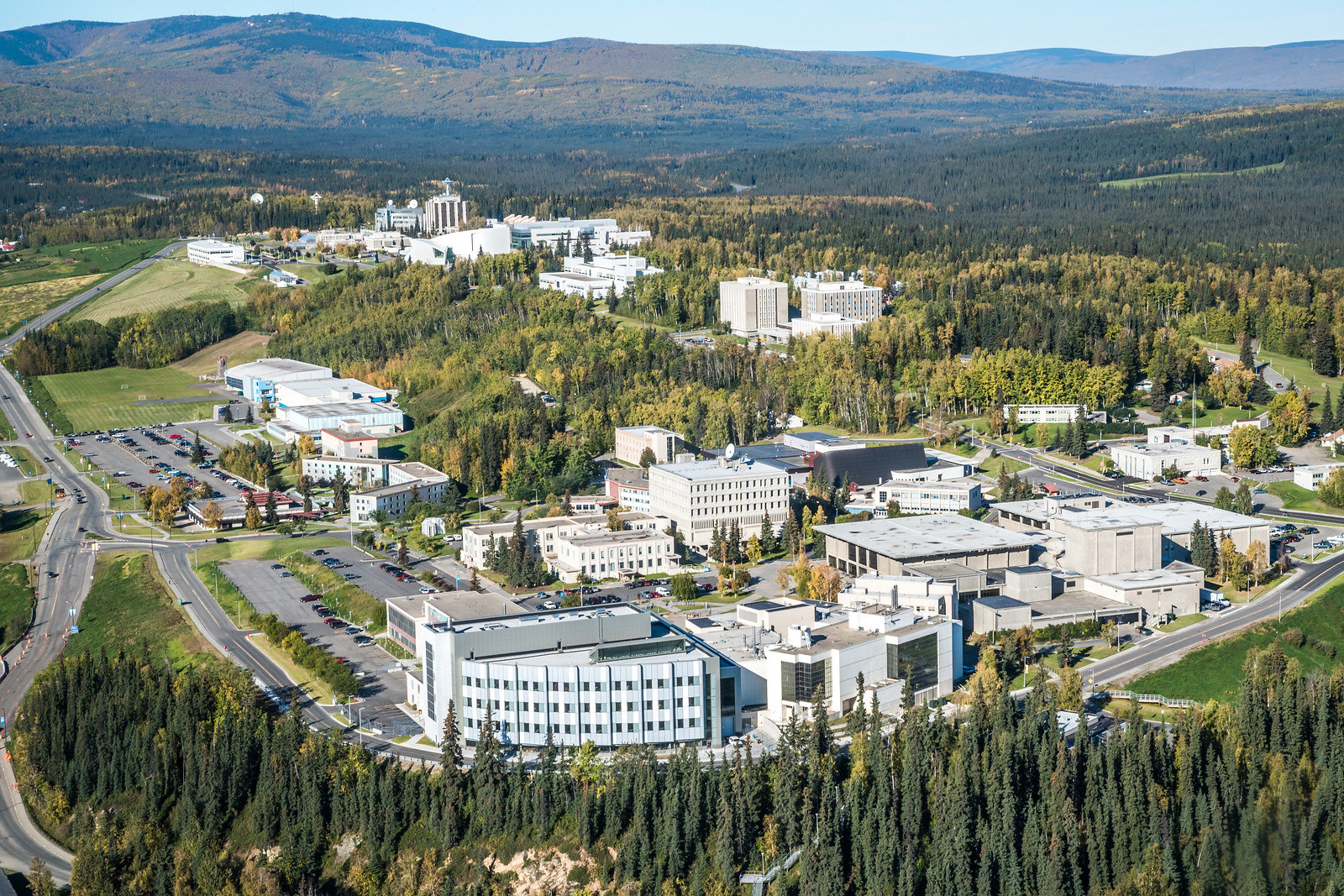 University of Alaska Fairbanks. © Alaska Center for Energy and Power.

This summer, the only US Arctic state sweltered under record-high temperatures. Meanwhile, sea-ice levels in the Bering and Chukchi seas hit record-lows and more than 650 wildfires raged across the state, claiming over 2.5 million acres of land thus far in what is now the biggest fire season on record. As dense smoke chokes residents, from the urban centers of Anchorage and Fairbanks to rural communities, Alaska’s universities, and the world-class climate change research centers housed in them, are braced for impact.

On June 28, Alaska Governor Mike Dunleavy slashed an unprecedented $444 million from the state’s operating budget through line-item vetoes. Of that amount, $135 million (including the $5 million initially cut by the Alaska legislature) was cut from the University of Alaska (UA) budget, eliminating over 40% of the State’s support for its only public university system. In July, the legislature failed to override Gov. Dunleavy’s vetoes, UA’s credit rating was drastically downgraded, and the UA Board of Regents declared financial exigency to allow swifter cuts to programs and faculty, including tenured professors. Meanwhile, students, faculty, and research projects hung in the balance.

In August, perhaps in light of mounting public outcry and a growing “Recall Dunleavy” campaign, the Governor circumvented the legislative process to reach a deal with UA Board of Regents chairman John Davies that would restore $110 million previously vetoed funds to the University of Alaska. The new cuts, reflected in HB 2001, were signed by Gov. Dunleavy on Monday, August 20, and the UA Board of Regents rescinded its declaration of financial exigency the same day.

The revised $70 million reduction will take effect over a three-year period, allowing University leadership to better plan for the overall funding reduction. While less drastic than the initial $135 million, UA is not off the hook. Most pressing is the $25 million slated for cuts in the fiscal year that began July 1. And effects are already being felt. Faculty and staff are unsure exactly where the cuts will be taken, but efforts to restructure the entire University system are underway and the UA board of regents has moved toward consolidating UA’s three universities under a single accreditation.

What does this mean for the future of Arctic research and Alaska’s critical role as a global research leader? At present, many researchers are feeling a sense of relief at the slower rate of cuts. However, this does not mean that research is untouched. The Cold Climate Housing Research Center (CCHRC) housed at the University of Alaska Fairbanks (UAF) took an additional $750,000 of budget cuts to its research program. Meanwhile, International Arctic Research Center (IARC) Director Dr Hajo Eicken mentions that a cut in unrestricted funding will likely have a significant impact on the ability for researchers to share critical findings. Many communications and outreach staff are directly supported by the relatively small amount of funding that IARC receives directly from the state budget. This will mean less visibility for the science being conducted through existing research programs and other U.S. federal research funding. And, Dr Eicken adds, without state funding, IARC local research projects that are highly relevant to stakeholders in Alaska may become much more difficult to deliver.

The lessened unrestricted state funding will also hamper the ability for the University’s researchers to pursue future funding, as staff and related resources that support those efforts are also vulnerable. As with many of Dunleavy’s cuts, the sudden and substantial reductions in state support prevents organisations from accessing critical outside funding, such as federal research grants. While research is mostly funded by outside agencies like NASA and the National Science Foundation (NSF), and not the state, it is state funding that makes those grants possible. UAF vice chancellor of research, Larry Hinzman, in an article for Physics Today, estimates that for every $1 of state funding, the University is able to returns of $7 in outside funding. Not only that, but a robust research institution attracts top scientists to Alaska. Budget cuts to research and administration, then, may inevitably limit the institution’s ability to attract and retain world class researchers. “What little state funding we get is absolutely critical”, says Dr Eicken.

But, as Dr Eicken goes on to mention, what the international community needs to understand is that cuts to UA institutions do not only have a local impact, rather it has “ripple effects”. Indeed, the US is a major global funder of climate change research. A 2017 research analytics report finds that the research produced through US grants, most notably through NSF support for research infrastructure in Alaska, provides critical data to a highly interconnected network of global Arctic and climate change research. Paralysing research capacities in Alaska could undermine projects already underway that depend on transnational collaboration across Arctic states. As just one example, Dr Hirshberg points out, “I’m part of a Canadian-led social sciences effort to understand how to build energy security in northern, Indigenous communities across the north, with partners in Alaska, Canada, Norway, and Sweden. We need sufficient funding and support to be able to fulfill our piece of this project.”  In crippling UA’s access to the state funding that it uses to leverage larger outside funding sources, the state budget cuts threaten research and mutual service obligations worldwide.

And the interdependency of global regional Arctic research is evident at the level of interpersonal relationships, as well. A loss of funding results in a weakened representation of Alaskans in key international bodies, as the restrictions take hold for travel, conferences and international meetings. Months of uncertainty have, likewise, pushed faculty and staff who have other employment options to depart the system, creating gaps for future research and collaboration, and leaving knowledge voids that will be difficult to fill in the present situation. In response to concerns over brain drain, Dr Eicken reiterates that researchers by nature are resilient, but adds that IARC is challenged on how to weather the cuts, especially given the overall uncertainty within the UA system as a whole. He further adds that cuts risk losing the holistic perspective that Alaska provides. Some of the roles people at UA institutions play on a global level – at various Arctic forums, for example – are directly linked to UA’s geographic location.

The loss of key faculty can be especially detrimental to institutional relationships at the international level, with potential for huge impacts in time spent re-building relationships when key linkages are lost. Dr Diane Hirshberg, Professor of Education Policy at University of Alaska Anchorage (UAA) and Advisor to the Chancellor on Arctic Research & Education, aptly points out, “It takes years to establish close working relationships in the Arctic, and the UA system faculty start with that advantage… Our leadership roles in Arctic research and policy extend far past our individual research projects.”

Of interest to many is perhaps in what ways this situation is reflective of the US and Alaska’s overall position in Arctic geopolitics? At a time of increased volatility in Arctic geopolitics, crippling the research engine that makes Alaska a hub for circumpolar research may also hamper its influence internationally. Pulling out of international agreements such as the Paris Climate Accord and cutting back funding from international institutions is certainly a leitmotif of the Trump Administration. However, in its retreat from global affairs, the US is also giving up important seats at the proverbial decision-making table at a time when the world order, and the very future of the Earth itself, is teetering on a precipice. As the Trump administration seemingly looks to amplify its involvement in Arctic regional politics through, some may say, delusional declarations of imperialistic grandeur, Gov. Dunleavy continues efforts that edge the US’s only actual Arctic State out of global affairs. As a center for groundbreaking research in the Arctic, from circumpolar health to climate change and defense, the University of Alaska consistently puts Alaska, and the US, on the map as a leader and innovator.

Although it is unlikely that the UA system will lose its overall prestige in Arctic research, UA researchers will likely need to rely more heavily on the international community in providing additional funding to support and maintain ongoing collaborative research projects in the absence of future funding. Despite the dire realities of a shrinking budget, Dr Hirshberg and Dr Eicken also see opportunities for greater engagement, collaboration, and for other institutions around the world to fill in the gaps. This can open the door for other institutions to take the lead on international research projects, which they will need to do to keep up with the critical research taking place in the Arctic. Crisis often goes hand in hand with creativity. With its longstanding traditions of cooperation and adaptiveness, there is perhaps no region better fit than the Arctic to rise to these present challenges.