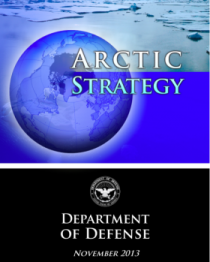 In 2013, the US Department of Defense released its first Arctic Strategy. The strategy was unveiled by the then US Defense Secretary Chuck Hagel at the Halifax International Security Forum in Halifax, Nova Scotia (Canada), on 22 November 2013. In his remarks at the Forum, Hagel noted:

“The United States takes its responsibilities as an Arctic nation very seriously, and the United States military has extensive experience operating in the Arctic. Alaska is home to more than 22,000 soldiers, sailors, airmen, and Marines, as well as nearly 5,000 Guardsmen and reservists. DoD’s Arctic capabilities include ski-equipped C-130s and nuclear submarines, which have been operating in the polar regions for more than 50 years. In 2009, the U.S. Navy released an Arctic roadmap, and in 2011, a realignment of combatant commands simplified our command and control arrangements in the Arctic.

Today, I am announcing the Department of Defense’s first Arctic Strategy to help guide our efforts going forward. This strategy supports President Obama’s national strategy for the region, and reflects America’s desire to work closely with allies and partners to promote a balanced approach to improving human and environmental security in the region.

The Arctic is a region of established nation-states. Engagement with Canada and the other Arctic nations – Denmark, Finland, Iceland, Norway, Russia and Sweden – is a cornerstone of our strategy. Arctic nations have publicly committed to work within a common framework of international law and diplomatic engagement.

As President Obama has said, “the Arctic region is peaceful, stable, and free of conflict.” Our goal is to help assure it stays that way. Ultimately, we envision a secure and stable Arctic, where all nations’ interests are safeguarded, and where nations work together to address problems and resolve differences.

DoD has focused on eight points to accomplish its objectives.

First, we will remain prepared to detect, deter, prevent and defeat threats to our homeland and we will continue to exercise U.S. sovereignty in and around Alaska.

Second, we will work with both private and public-sector partners, including the state of Alaska and Federal agencies, such as the U.S. Coast Guard, to improve our understanding and awareness of the Arctic environment so that we can operate safely and effectively. This is the first new frontier of nautical exploration since the days of Ericsson, Columbus, and Magellan, and it provides a clear opportunity to work together to ensure we have accurate observations, maps, and models of the Arctic’s atmospheric, oceanic, and sea ice conditions.

Third, we will help preserve freedom of the seas throughout the region, to ensure that the Arctic Ocean will be as peacefully navigated as other oceans of the world. These activities will be carried out within existing frameworks of international law, which provide a comprehensive set of rules that govern the rights, freedoms, and uses of the world’s oceans and airspace – including the Arctic – as well as mechanisms for peacefully resolving disputes.

Fourth, we will carefully evolve our Arctic infrastructure and capabilities at a pace consistent with changing conditions. DoD will continually re-evaluate its needs as activities in the Arctic increase, as we balance potential Arctic investments with other national security priorities. We are beginning to think about and plan for how our Naval fleet and other capabilities and assets will need to adapt to the evolving shifts and requirements in the region.

Fifth, we will continue to comply with our existing agreements with allies and partners, while also pursuing new avenues of cooperation, as we work together to meet shared security challenges. By taking advantage of multilateral training opportunities with partners in the region, we will enhance our cold-weather operational experience, and strengthen our military-to-military ties with other Arctic nations. This includes Russia, with whom the United States and Canada share common interests in the Arctic, creating the opportunity to pursue practical cooperation between our militaries and promote greater transparency.

Sixth, we will be prepared to help respond to man-made and natural disasters in the region. Our support will extend not only to civil authorities in Alaska and around its coast, but also to cooperation with allies and partners through humanitarian assistance and disaster relief operations.

Seventh, we will work with other agencies and nations, as well as Alaska Natives, to protect the environmental integrity of the Arctic. DoD will use existing capabilities to help address safety-related challenges, including international search-and-rescue as well as incident and disaster response. We will work closely with our Canadian partners on emergency response operations that help save lives.

And eighth, we will support the development of the Arctic Council and other international institutions that promote regional cooperation and the rule of law. DoD will work with the Department of State as we participate in new initiatives like the Arctic Security Forces Roundtable and the recent meetings of the Northern Chiefs of Defense. These engagements will help strengthen multilateral security cooperation throughout the region, which will ultimately help reduce the risk of conflict.

All of these approaches are informed by DoD’s global responsibilities and strategic interests, budget limitations, and shifts in both the Arctic environment and the geostrategic landscape.

DoD’s Arctic Strategy is a long-term endeavor – and our efforts to implement it will unfold over years and decades, not days and months. Even as we grapple at home with near-term challenges, including steep, deep, and abrupt defense budget reductions and continued budget uncertainty, this kind of long- range thinking is vital for our future. Like always, it requires that we closely align our resources and long-term investments with our national security objectives. As shifts occur in the strategic landscape, the United States and its allies must be prepared to adjust their defense institutions and capabilities to meet new challenges.”