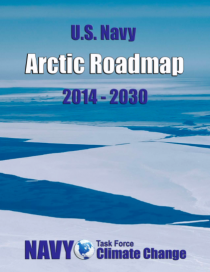 The United States is an Arctic nation through the state of Alaska and its surrounding territorial and Exclusive Economic Zone waters located in and around the Arctic Circle. The United States Navy, as the maritime component of the Department of Defense, has global leadership responsibilities to provide ready forces for current operations and contingency response that include the Arctic Ocean. The Arctic Region remains a challenging operating environment, with a harsh climate, vast distances, and little infrastructure. These issues, coupled with limited operational experience, are just a few substantial challenges the Navy will have to overcome in the Arctic Region. While the Region is expected to remain a low threat security environment where nations resolve differences peacefully, the Navy will be prepared to prevent conflict and ensure national interests are protected.

This update of the 2009 Navy Arctic Roadmap provides guidance necessary to prepare the Navy to respond effectively to future Arctic Region contingencies, delineates the Navy’s leadership role, and articulates the Navy’s support to achieve national priorities in the Region. Navy functions in the Arctic Region are no different from those in other maritime regions; however, the Arctic Region environment makes the execution of many of these functions much more challenging.

In May 2013, President Obama published the National Strategy for the Arctic Region, defining the desired end state as an Arctic Region stable and free of conflict, where nations act responsibly in a spirit of trust and cooperation, and where economic and energy resources are developed in a sustainable manner. In November 2013, the Secretary of Defense published the Department of Defense Arctic Strategy, identifying two supporting objectives to the National Strategy:

In support of National and Department of Defense aims, the Navy will pursue the following strategic objectives:

In the coming decades, the Arctic Ocean will be increasingly accessible and more broadly used by Arctic and non-Arctic nations seeking the Region’s abundant resources and trade routes. Due to the significant retreat of sea ice, previously unreachable areas have started to open for maritime use several weeks each year. Arctic nations make investments. Despite this gradual ice opening, the Region’s frequent harsh weather and sea conditions are significant limiting factors for Arctic Ocean operations.

This Roadmap outlines the Navy’s strategic approach for the Arctic Region and the ways and means to achieve the desired national end state. Resource constraints and competing near-term mission demands require that naval investments be informed, focused, and deliberate. Proactive planning today allows the Navy to prepare its forces for Arctic Region operations. This Roadmap emphasizes low-cost, long-lead activities that position the Navy to meet future demands. In the near to mid-term, the Navy will concentrate on improving operational capabilities, expertise, and capacity, extending reach, and will leverage interagency and international partners to achieve its strategic objectives. The Roadmap recognizes the need to guide investments by prudently balancing regional requirements with national goals.

This Roadmap provides direction to the Navy for the near-term (present-2020), mid-term (2020- 2030), and far-term (beyond 2030), placing particular emphasis on near-term actions necessary to enhance Navy’s ability to operate in the Arctic Region in the future. In the near-term, there will be low demand for additional naval involvement in the Region. Current Navy capabilities are sufficient to meet near-term operational needs. Navy will refine doctrine, operating procedures, and tactics, techniques, and procedures to guide future potential operations in the Arctic Region. In the mid-term, the Navy will provide support to the Combatant Commanders, United States Coast Guard, and other United States Government agencies. In the far-term, increased periods of ice-free conditions could require the Navy to expand this support on a more routine basis. Throughout these timeframes, the Navy will continue to develop and enhance cooperative relationships across the Department of Defense, United States Government agencies, industry, and international allies and partners.