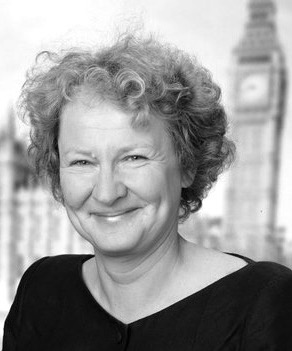 Helen Goodman MP is the Labour Member of Parliament for the constituency of Bishop Auckland (UK) and currently serves on the Treasury Select Committee.

Helen was first elected in 2005 and has since won three consecutive elections. She served on the Public Accounts Select Committee from 2005 to 2007, the Joint Committee on the Draft Climate Change Bill in 2007, the Procedure Committee from 2011 to 2014 and again from 2016, and the Treasury Select Committee and Ecclesiastical Committee since 2015. Over her Parliamentary and Ministerial career,  she was also Deputy Leader of the House of Commons from 2007 to 2008, Assistant Whip (HM Treasury) from 2008 to 2009, and Parliamentary Under-Secretary of State at the Department of Work and Pensions. In opposition since 2010, Helen has served as Shadow Secretary of State for Work and Pensions in 2010; Shadow Minister for Justice (Prisons) from 2010 to 2011; and Shadow Minister for Culture, Media and Sport from 2011 to 2014. Between December 2014 and July 2015, she held the post of Shadow Minister for Welfare Reform, which included coordinating Labour’s campaign for the abolition of the Bedroom Tax. In July 2015, Helen was elected by her peers to serve on the Treasury Select Committee.

Helen is also involved with various All-Party Parliamentary Groups (APPGs) in the UK Parliament. She is the Vice-Chair of the APPGs for Denmark, Fair Business Banking and Rural Services; Treasurer of the APPGs on Ukraine and Wellbeing Economics; and Officer of the APPG for the Protection of Cultural Heritage.

Before becoming an MP, Helen was Head of Strategy at HM Treasury, a senior executive of two children’s charities, and worked for the Czechoslovak Prime Minister. She was an inaugural trustee at Auckland Castle, having led the successful campaign to retain the Zurbaran Paintings there. She is a Friend of Bowes Museum, and Patron of both the Befriender Scheme in Spennymoor and the County Durham charity Heel & Toe Charity. Regionally, she is a Patron of North East Call to Action on Global Poverty and Climate Change (NE-CAP).