MP for Penistone and Stocksbridge (UK) 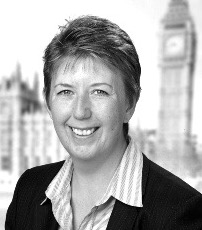 Angela Smith MP is a British independent politician, who has served as the Member of Parliament for the constituency of Penistone and Stocksbridge (UK) since 2010.

Originally from Grimsby, Angela went to Nottingham University, gaining a First in English. After studying at Cambridge, she moved to Sheffield where she worked as a Lecturer. Angela has worked in the NHS, the banking sector, and before becoming a full-time politician, she was a further education teacher specialising in helping youngsters who wanted a second chance to gain academic qualifications. In 1996, Angela was elected to Sheffield City Council for the ward of Broomhill, becoming in 1998 the Chair of Finance and in 1999 Opposition Spokesperson for Education. In 2000, she was re-elected to Sheffield Council for the ward of Birley, and, when Labour regained control, she became Cabinet Member for Education. In 2005, Angela was elected to Parliament for the constituency of Sheffield Hillsborough; and in 2010, she was re-elected for the new seat of Penistone & Stocksbridge, a constituency she again won for Labour at the 2015 general election.

Between 2005 and 2008, Angela was Parliamentary Private Secretary to Yvette Cooper in the Department for Communities and Local Government and the Treasury. She also served on the Select Committees for Regulatory Reform from 2005 to 2007, for Transport from 2009 to 2010, for Procedure from 2010 to 2011 and for Administration from 2010 to 2012.  In 2010, she became an Assistant Opposition Whip, a post she held until 2011. Between 2011 and 2014, she was Shadow Deputy Leader of the House; and in April 2014, Angela moved to the Shadow DEFRA team as the Shadow Minister for Water, the Marine Environment, Fisheries and Animal Welfare. In September 2015, she stood down from the opposition front bench to concentrate on environmental issues on the Environment, Food and Rural Affairs Select Committee.

Angela is also a member of various All-Party Parliamentary Groups (APPGs) in the UK Parliament. She is the Chair of the APPG for Water; Vice-Chair of the APPGs for Finland, Mountaineering, and Trade and Investment; Treasurer of the APPG for Steel and Metal Related Industries; and Officer of the APPG for Game and Wildlife Conservation. In addition, she maintains a strong interest in her former Shadow Brief including fishing and the marine environment. In her spare time, she enjoys cooking, walking in the Peak District, and watching her favourite football team Sheffield Wednesday. She lives in the north of Sheffield with her husband.