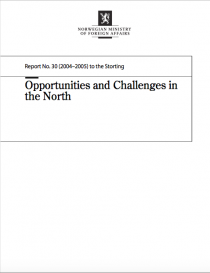 The High North has been important for Norway for hundreds of years in terms of business opportuni- ties and resources, and interest in these areas is growing rapidly today. Technological advances have opened up many new opportunities for mak- ing use of the resources in this area, and other countries are also taking more interest in the region. Thus the High North presents great oppor- tunities for Norway.

Norway’s territorial waters cover a very large area and the country possesses very considerable natural resources in relation to the size of its popu- lation and the extent of its political influence. This gives rise to a number of very important foreign policy issues. Thus the High North also poses great challenges for Norway.

In its new, comprehensive policy on the High North, the Government aims to take advantage of the opportunities and meet the challenges through bilateral and multilateral co-operation and through closer dialogue on the High North with the rele- vant countries. By clarifying goals and instru- ments, the Government wishes to formulate a coherent and offensive High North policy that strikes a balance between different interests and sustainable development considerations.

In March 2003 the Government appointed a committee of experts on the High North to identify the new opportunities and challenges Norway is facing in the North and to evaluate from an overall perspective how Norwegian interests in this region can best be safeguarded.

The committee’s report was published as NOU 2003: 32 (Official Norwegian Report), entitled Look North! Challenges and opportunities in the northern areas, and was circulated for comment to a wide range of institutions whose work is concerned with the High North.

The committee’s report, the ensuing debate and the consultative comments, together with the report on the High North by the Executive Com- mittee for Northern Norway, have been given con- siderable weight in the deliberations and priorities that are described in the present report.

In the following emphasis is given to the for- eign policy aspects of the High North policy. In drawing up the policy other factors will also have an impact, such as defence issues and the frame- work conditions for business activities, but the Government has proceeded on the assumption that these factors will be taken up in other con- texts.