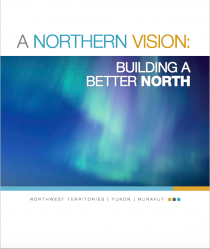 In September 2014, the premiers of Northwest Territories, Yukon and Nunavut met in Yellowknife to announce the release of A Northern Vision: Building a Better North.

This document renews the collaborative vision for the North shared by the three territorial governments by focusing on productive and engaged citizens, energy, infrastructure and governance to create a stronger North.