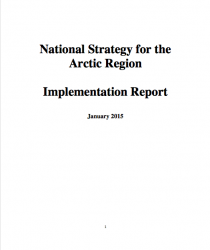 In March 2015, the Obama Administration released a report highlighting progress made by the federal government in the Arctic during 2014. This followed the release of the The National Strategy for the Arctic Region in May 2013 and the Implementation Plan in January 2014, and serves as an annual report that demonstrates progress on the goals set forth in the Implementation Plan.

The Arctic is a key region of the United States with critical influence on the global environment and economy. The Arctic is a peaceful and stable region in the world, and the United States will continue to work with the international community to understand the region, and its impacts on the globe, through coordinated scientific research and traditional knowledge. The importance of the region, coupled with a coordinated approach, provides unique and fresh opportunities for unprecedented regional cooperation and expansion of international governance.

The National Strategy for the Arctic Region (Strategy) laid out the United States’ priorities for the region; its Implementation Plan then provided clear guidance and responsibilities to achieve milestones associated with the Strategy. This report describes implementation progress along the three lines of effort described in the Strategy:

The Federal Government, in coordination with the State of Alaska and Alaska Natives, accomplished the following key objectives:

While the United States has made significant progress over the past year, more work remains. Some initiatives are ahead of schedule; others continue to be addressed. This report discusses the broad range of activities underway by the Federal Government, in coordination with the State of Alaska, Alaska Natives, and international, regional, and local stakeholders.

For the Implementation Report, see here.