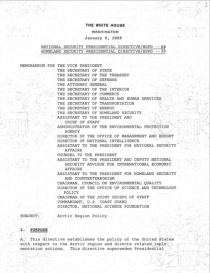 On January 12, 2009, the George W. Bush Administration released a presidential directive “establish[ing] the policy of the United States with respect to the Arctic region and direct[ing] related implementation actions.” The directive, dated January 9, 2009, was issued as both National Security Presidential Directive (NSPD) 66 and Homeland Security Presidential Directive (HSPD) 25. The directive was the result of an interagency review, and it superseded for the Arctic (but not the Antarctic) a 1994 presidential directive on Arctic and Antarctic policy. The directive, among other things,

The Obama Administration has not issued a new directive superseding NSPD 66/HSPD 25; it is currently operating under the Bush Administration’s policy directive.