Recalibrating Maritime Security in the Arctic 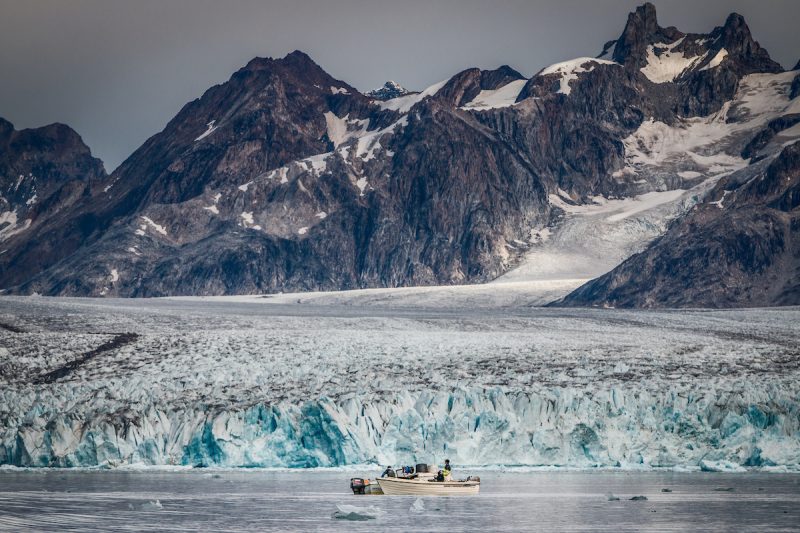 When Inuit hunters set out from Kugluktuk, Nunavut, their attention is on the task at hand. The skill, knowledge, and patience required to hunt successfully in the North American Arctic—especially during winter—is formidable. One small miscalculation as to the weather or the ice thickness could have fatal consequences—and all this is complicated by changing climate patterns. Here, maritime security is understood in environmental terms, not military ones.

Similarly, when a fisher sets out from Ísafjörður, Iceland, an intimate knowledge of the ocean is key to success. If a ship starts taking on water or flips, the training of the crew and the ability of the coast guard to respond effectively is the difference between life and death. Security is reframed again as survival in the face of an unforgiving environment. In both cases, the immediate danger is not posed by the possibility of a spillover of tensions from the Ukraine crisis, but instead by the weakening ice underfoot or the icy waters of the Arctic.

The concept of maritime security resonates across the Arctic. The inhabitants of Newtok, Alaska, are watching as their village sinks into the sea; communities along the Barents Sea face a potential environmental disaster from a Soviet era nuclear submarine that sunk in 2003; and increasing cruise ship traffic tests the limits of regional coast guard capacity. The discussion on Arctic maritime security needs to be moved from Ottawa and Oslo to Tuktoyaktuk and Tromsø. It needs to be recalibrated to the concerns of northerners.

In the shadow of conflict

The lack of overt military concerns has not always been the case in the Arctic. Indeed, for a better part of the 20th century, the Circumpolar North was heavily militarised. During WWII, the US military significantly expanded their presence in Alaska and Greenland, fearing Japanese expansion and following the occupation of Denmark respectively. Elsewhere, concerns over the possibility of German ships disrupting Atlantic trade led the UK to focus on the GIUK gap (the open ocean on either side of Iceland).

During the Cold War, the emphasis shifted. The US strategy for the “Northern Flank” was dual: neutralise the Soviet nuclear threat and take pressure off the main front in Central Europe. This involved thinking above and below the ice in order to tackle both the nuclear submarines prowling the Arctic Ocean and the ICBMs that could come sailing over the icecap. Summarising the significance of the region, one general quipped that “if there is a Third World War, the strategic center of it will be the North Pole.”

These concerns began to fade with the end of the Cold War. New organisations such as the Arctic Council, a Finnish-Canadian initiative to facilitate environmental cooperation, sprung up in the 1990s. While security concerns remained, the receding security overlay allowed other concerns to emerge. These decaying military installations, in some cases simply abandoned when they were rendered obsolete, generated many of the environmental problems present today. In other cases, the waning military investment hindered the development of adequate infrastructure required to operate safely and effectively in the Arctic.

Today, while headlines might proclaim the dawning of a “new Cold War”, the reality is that the Arctic is defined by impressive levels of cooperation. Notably, this cooperation has continued on many levels despite the increased tensions in Ukraine. Even Artur Chillingarov, the man at the heart of the controversy surrounding the Russian flag planting on the seabed of the North Pole, reminded the audience at the Arctic Council that there are “no problems in the Arctic that could not be solved with words.” Not only does this cooperation in the Arctic keep open channels for communication between Russia and the West, it also provides a solid foundation for tackling  problems that are inherently international in nature.

On the environmental front, substantial progress has already been made. The Arctic Council has played a critical role in generating scientific research on the challenges facing the region. The 2009 Arctic Marine Shipping Assessment, for example, identified a spill of heavy fuel oil (also known as “bunker fuel”) as one of the top threats to the region. Another good example is the Declaration Concerning the Prevention of Unregulated High Seas Fishing in the Central Arctic Ocean; there is no prospect of commercial fisheries appearing in the short- to medium-term so its negotiation was a proactive measure.

In addition to the work being done on environmental threats, the continuing cooperation among the various Arctic coast guards is a testament to the possibility of tackling these problems. The Arctic Coast Guard Forum, for example, was established in October 2015 between all the Arctic states. According to Andreas Østhagen, a Senior Fellow at The Arctic Institute, this forum focuses on keeping political channels open and facilitating practical cooperation. This was the case when a South Korean fishing vessel sank off the coast of Chukotka and the Russian authorities radioed for assistance from the US Coast Guard.

The Arctic as an ocean

The Arctic is an ocean surrounded by continents. Life on the water is a central component of the daily lives of many Arctic communities, ranging from kelp farmers in Grindavik, Iceland, to fishers in Sisimiut, Greenland. More than just a way to make ends meet, the ocean is an important part of the social and cultural fabric of many northern communities.

This is not to say that traditional security concerns are not at play in the Arctic, or that they should be discounted. While the region currently sees impressive levels of cooperation, there are no guarantees that this will continue. Beyond the military aspect, however, the very nature of the Arctic means that much investment can fulfill dual purposes: a new deep-water port in Canada’s North, for example, could serve as both a base for navy ships but also as a coast guard hub.

Taken together, if security is understood as a response designed to mitigate the consequences of a perceived danger, then maritime security in the Arctic needs to be understood as environmental in all senses of the word. The concerns of northerners need to be placed at the forefront of the debate. While significant progress is being made within the Arctic by regional forums, the larger security discussion needs to be steered away from fictional conflicts over natural resources.

Ultimately, this is not a move towards a new conception of security. Instead, this is a return to the way that northerners, ranging from the Inuit hunter to the Icelandic fishermen, have always understood maritime security in the Arctic.

Greg Sharp serves as Unit Lead and Expert in the Energy Unit at PRPI. A PhD student at the University of British Columbia in Vancouver, Greg also holds a Master of Arts in Political Science from the same university and a Master of International Public Management in Diplomacy from Sciences Po: PSIA. Although his research has largely focused on the geopolitical ramifications of extractive industries in the Arctic, his work runs the gamut from devolution agreements in Canada’s North to questions of regional security.