Managing for the Future in a Rapidly Changing Arctic (April 2014) 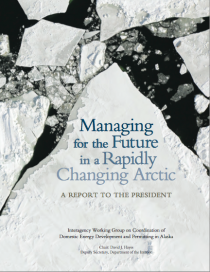 On 4 April 2014, an interagency working group chaired by Interior Deputy Secretary David J. Hayes released a major report that calls for an integrated management strategy for the rapidly changing Arctic. The report highlights the need for a coordinated approach that uses the best available science to integrate cultural, environmental and economic factors in decision-making about development and conservation. The report — Managing for the Future in a Rapidly Changing Arctic — is based on input from a wide range of Alaska stakeholders. In addition to recommending integrated management, the report recommends continuing high-level attention on the Arctic, strengthening state and tribal partnerships, encouraging more stakeholder engagement, undertaking more organized and inclusive scenario planning, and coordinating and potentially consolidating environmental reviews that are now being prepared by multiple agencies.

The report does not recommend new regulations or represent new policy decisions, but it does call for a review of the activities of over 20 federal agencies involved in the U.S. Arctic by the end of 2013 with an eye toward increased coordination and the elimination of duplication of efforts. Congress has entrusted the federal government with primary jurisdiction over nearly three quarters of the U.S. Arctic’s land mass. In addition, the federal government has a special relationship with Alaska natives, including Alaskan tribes and native corporations

The report also includes the launch of a new government website, the Arctic Science Portal, by the Arctic Research Commission, which is chaired by former Alaskan Lieutenant Governor Fran Ulmer. This web portal will provide decision makers and other interested parties with easier access to scientific information about the Arctic. It includes information on topics such as sea ice, fisheries, oil spill research and many others. It can be accessed at http://www.arctic.gov/portal/.

A copy of the report is available here.