Inuit Impact and Benefit Agreements (Part I): What Are They? 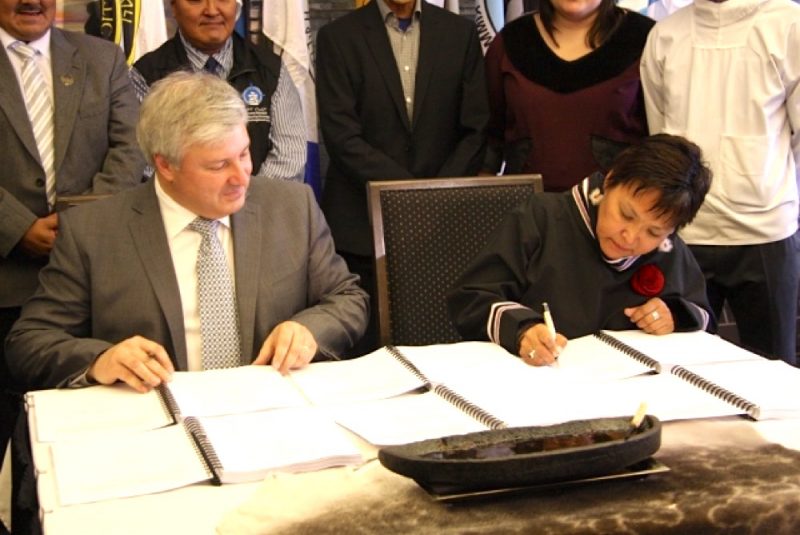 Relationships with Canadian Indigenous Peoples have been historically shaped by a colonial mindset of Eurocentric ownership. These relationships and many of the agreements that stemmed from them were based on a mindset of superiority from either the Canadian government, European governments, or companies. This is no longer acceptable, nor was it ever. When it comes to the modern day relationship between corporations/governments and Indigenous peoples, there can still be deep-seated tensions. One of the ways to mitigate these are to sign proper and well-negotiated Impact and Benefit Agreements. The Inuit peoples of Canada’s North have used and continue to use these agreements to ensure their voices are heard, and that they also reap the benefits of northern development.

What is an IIBA?

An Inuit Impact and Benefit Agreement (IIBA) is a formal contract that lays out a project between an Inuit community and a corporate or government project, explains the implications – both negative and positive – and clarifies how the associated Inuit groups will gain. These Agreements can and often do involve anything that is connected with the specific development project that will have an impact on the Inuit peoples. It is only after a long process of understanding, consultation and negotiation that these documents are signed. They are almost always legally binding and, although not confidential by law, are often confidentially negotiated by convention. It is important to note that an IIBA not only outlines the benefits that Inuit peoples can gain, but also the potential negative implications, both to the Inuit peoples and the environment. Often, the agreement will outline which steps will be taken to help mitigate the risks and the negative effects.

In Canada, the process of negotiating an IIBA can be challenging due to the fact that there is no clear recognised layout for how it will or should look. Article 26 in the Nunavut Land Claims does lay out 21 points of appropriate Inuit benefits as well as some of the more important points of doing business with Inuit people specifically residing in Nunavut; this should be a guide for companies looking toward creating an IIBA and a good starting point. Moreover, a comprehensive look at IBAs from a community’s perspective can be seen in the IBA Community Toolkit that The Gordon Foundation commissioned in 2010. The toolkit was put together with the input of many Indigenous peoples, and although it does not focus specifically on Inuit agreements, it is an important read for anyone thinking to negotiate in Canada’s North. The toolkit focuses on important points such as: negotiation is not consent, the importance of engaging the community, and the importance of clear communication between the two negotiating parties.

Impact and Benefit Agreements have been signed in Canada since the 1970s, starting as agreements between the government and Indigenous peoples. Mostly these agreements were put in place to ensure that Indigenous peoples were involved in mining projects, but, since then, have expanded to become more prevalent in different types of circumstances with a wider range of groups, including private companies. Furthermore, it should be noted that IBAs do not only exist in Canada; Australia, for example, also has these agreements with their Aboriginal peoples.

Confidentiality has long been an aspect of Impact and Benefits Agreements, which has been both negative and positive in the long run. The limiting of transparency, although beneficial to companies who are looking to keep financial information private, can be challenging for Indigenous groups who are looking to share and learn from previous experiences. Communities can also feel left out of the process. Furthermore, with the negotiation confidential, it makes it difficult to study and understand the process that leads to any agreements. This exacerbates the difficulties in improving the process and ensuring the best possible outcomes in future agreements. Although hundreds of Impacts and Benefit Agreements have been signed across Canada throughout the last 40 years, the actual successes and pitfalls have not been carefully and comprehensively studied.

The loose definitions of what an IIBA involves is not the only difficulty with the creation of one.  The Inuit peoples in Canada have four different regional groups within the larger land claims agreements, collectively known as Nunangat: Nunatsiavut, Nunavik, Nunavut, and Inuvialuit, and each of these regions have different expectations regarding IIBAs and negotiation expectations with governments and corporations.

Nunavut, for example, through the Nunavut Land Claims Agreement, has very fixed rules for IIBAs and how they should be handled, specifically that they are necessary with any major development plans. Nunatsiavut, the Inuit land in Newfoundland and Labrador, has the same expectation for any large-scale projects. In Inuvialuit, the region in the Northwest Territories, the negotiation of a ‘participation agreement’ is needed in many cases, and there is recognition that different types of agreements can be signed in lieu of an IIBA. Finally, in Nunavik, the northern third of Quebec, there is an encouragement to sign IIBAs.

The Supreme Court of Canada has further stated that there is a duty to consult with local Aboriginal Populations. These types of documents allow the Inuit community to properly control their land, deal and mitigate potential damages to the land and ensure economic benefits. Although not every region requires them, a consultation with Inuit people is required. With a long tradition of ignoring and mitigating the voices of Inuit peoples, IIBAs not only allow for a proper negotiation process, but also for the recognition of past wrongs, and the acceptance of a new relationship between Aboriginal populations and governments/corporations.

The duty to consult is something that should not be approached lightly. The Tr’ondëk Hwëch’in First Nation have recently set precedent by suing the Yukon government for not consulting them before mineral exploration was pursued on their traditional land. This case is important due to the fact that it is the first case of its kind; the land that the lawsuit deals with has been settled with a land claim.

Before any company sits down to negotiate and work with Inuit peoples in Canada, it is important to be aware of the location and the implications this will have on the negotiation process. Regardless of location, however, it is key for companies to engage and respect the peoples who have been successfully living in the north for many years, and IIBAs are an important way to do this.

Technical Arrangements (Who, What, Where)

When looking at IIBAs, it is important to understand the technical aspects. First, the analysis of who works on the negotiation process as well as who signs them. The negotiation process, as mentioned, is done between an Indigenous community and a corporation or government agency. The Gordon Foundation Toolkit emphasises the need for a strong negotiating team as well as a community steering committee which helps gain the knowledge of the whole community. The lead negotiator should, according to the Toolkit, be a “proud and strong community person, not a consultant or lawyer.” As for including the lawyers and consultants in general in the team, the opinion is split. Some Indigenous peoples want lawyers there to help explain technical aspects, while others believe that lawyers only complicate language used. This opinion will differ between agreements and Indigenous communities.

What is actually in one of these agreements? As mentioned, there is no framework in Canada for what should be included, but more often than not, they deal with human capital development, economic development, social development, culture, and environment. Because of the implications that Canada’s IIBAs will involve long-term value, due to the historical context of these agreements, the focus is often on sharing, social progress, and compensation.  This means that the focus is indeed on human aspects, such as employment, building communal space, engaging the community by ensuring betterment of situations.

What Does This Mean for Companies Looking to Do Business Up North?

For companies looking to do business in Canada’s north, it is important to be aware of the important realities of working there. Working successfully with the Inuit people should be and is one of these realities. Cooperating and signing an IIBA is a way in which companies can foster positive relationships with the peoples who live and flourish in the northernmost regions of our world.

Furthermore, the signing and negotiating of these types of agreements will lay out positive and realistic expectations for the outcome of the project. Therefore, it remains important to be specific, open, and to continually consult Inuit companies as the work progresses. Signing an IIBA is not the final part of the negotiation process, but the start of the relationship. These dialogues, especially coming from global companies, are much more than a negotiation process; they are an opportunity to show how communities are respected, how working with peoples who live on the land is important, and showing that our world is changing and that the new norm is that the people who live on the land are respected and have a voice in the decisions made.

Links to Further Your Knowledge:

Mieke Coppes serves as an Expert within PRPI’s Indigenous Peoples Unit. Mieke received her MSc in International Relations from the London School of Economics and Political Science (LSE), where she focused on foreign policy analysis and the Arctic, as well as the role that Indigenous Peoples play in the north.