An Internet Cable Will Soon Cross the Arctic Circle 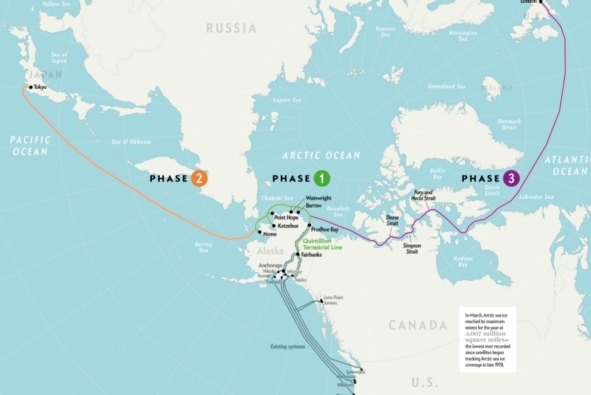 More than a century ago polar explorer Roald Amundsen and his six-man crew became the first to navigate the icy Northwest Passage. This month much larger ships than Amundsen’s will retrace parts of the sea route but not as adventurers. Instead they will begin laying an undersea fiber-optic cable meant to connect Asia and Europe by crossing the Arctic Circle—the shortest practical distance yet for Internet signals traveling between the two continents.

Most of the undersea cables that currently form the backbone of the World Wide Web connect the U.S. to Europe and Asia by crossing the Atlantic or Pacific oceans. But climate change and an accelerating loss of Arctic sea ice during summer months have opened the possibility of northern cable routes. “It is more viable for [companies] to propose these new and innovative routes than ever before,” says Nicole Starosielski, a media, culture and communications researcher at New York University and author of the 2015 book The Undersea Network.

In this case, Anchorage-based Quintillion Networks hopes its cable can offer high-speed Internet connections to remote communities in Alaska and Canada for the first time. The cable, which is expected to reduce the lag in transmissions between London and Tokyo, may also offer advantages to stock market traders who want the shortest possible delays on millisecond transactions.

Many countries would favor less U.S.-centric cable routes and additional backup lines to avoid U.S. surveillance and disruptions in service, Starosielski says. Such political and economic considerations have whetted the world’s appetite to fund the installation of new and potentially more costly cable projects. But only time will tell if the Arctic route and other undersea Internet cable ambitions will pay off in the long run.

*Risk-assessment figures reflect typical threats to cables in the Atlantic and Pacific oceans. For much of the year, ice covering large parts of the Arctic Ocean and surrounding seas may protect this project from the threat posed by fishing vessels.

This article was originally published on the website of the Scientific American. See the full article here.