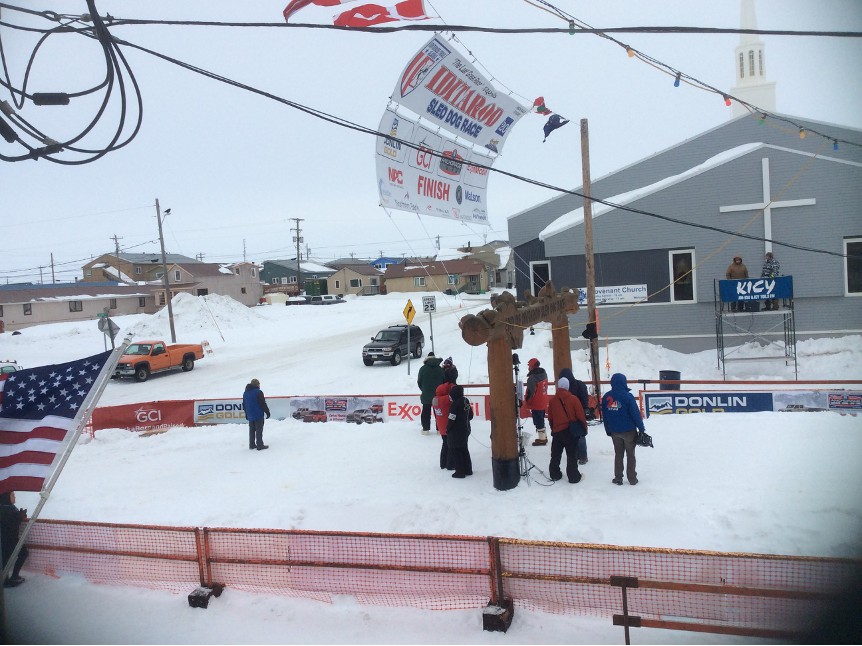 The Iditarod Committee, located in Wasilla, Alaska, has announced that 57 mushers signed up on opening day to compete in the 2021 dogsled race, “The Last Great Race on Earth.” The Committee reported that it is planning the “safest event” with the development of mitigation scenarios to protect against the deadly global pandemic.

This year, the 48th running of Alaska’s competitive Iditarod race, with hundreds of sled dogs and nearly 60 mushers at the 8th March start, was assaulted by a triple threat of nature in unusually heavy snow storms, howling winds and punishing cold temperatures plunging deep into negative territory in the interior. About 22 miles from the finish line, with powdery snow on one side and the Bering Sea on the other, relentless winds and storm surges pushed the sea waters that flooded the trail, leaving some mushers and their dogs stranded.

The weather conditions caused more challenges than usual in a race that routinely takes it to the limit. Along the nearly 1,000 mile trail, the powdered snow was reportedly so deep that mushers carried guns to keep moose, stranded on the snowy trail by high, icy walls of snow, from attacking the dogs.

If that wasn’t enough, a second assault by an occurrence of nature – the novel coronavirus – created an unsettling and potentially deadly interplay between the only major US sports event not cancelled due to the virus. The coronavirus epidemic unfolded at local, state, and national levels in a parallel track to the demanding race through Alaska’s wilderness to its Bering Sea finish, at Nome, known for its Klondike gold history, this time with few cameras or klieg lights.

The 7th March celebratory ceremonial start in Anchorage hosted a field of 57 mushers and their sled dogs that wound through its downtown streets, packed with applauding fans, to the cities’ outskirts at the Campbell Airstrip, where the mushers packed up to prepare for the next day’s “real start” at Willow, some 50 minutes away. At Willow, the relative quiet allowed the adoring spectators to hear the soft padding of the sled dogs’ feet, protected by red and black wool booties, as they gained speed and focus for The Last Great Race on Earth, which, according to veteran musher Martin Buser, most of the Olympic-level dogs in the race have run before. (Parlow interview, 5 March 2020)

As the mushers tested their endurance, picked up speed and set their pace, the weather shifted. The interior’s blistering winds and cold and deep soft snow, indeed, left stranded moose on the trail while winds from the coastal storms, not far from the Nome finish, created fast-moving overflows of river water, heated by thermal waters, that submerged parts of the trail near the last checkpoint. In all, 22 mushers scratched from the race, including three who activated SOS alert buttons that brought in the Army National Guard to rescue the mushers and dogs from their trapped sleds. The rescue team helicoptered out the mushers, wrapped in their water-soaked sleeping bags, while snowmobilers rescued the sled dogs. Following the rescue, race officials reworked the route for dog and musher teams that followed.

This year’s winner was Thomas Waerner of Norway, who finished the 8-15 day race in 9 days, 10 hours and 37 minutes with a team of 10 dogs, having started with the required 14. Given the unseasonal cold, mushers were required to carry insulated dog coats for each dog in the team for running or resting. Iditarod rookie Kaci Murringer, an understudy, perservered to finish dead last, thus, having the honor to extinguish the “Widows Lamp” that signals all mushers and dogs are accounted for.

For a sense of the uncertainties of the grueling race, it was Murringer’s mentor, Matt Failor – who won the 2019 Kuskokwim 300 Sled Dog race in record time and finished in an impressive 18th place in the 2019 Iditarod – who was one of the three choppered out of the flooding waters. A proud Failor was present at the finish to congratulate his understudy and dog handler under the Burled Arches at the Nome finish.

While the mushers pushed on, the grim realities of the novel coronavirus crept toward Nome, the epic Klondike gold mining town that brought settlers to Alaska. Nome’s Mayor, the recently departed Richard Beneville, called a series of New England town-hall type community meetings to discuss whether to shut down bars, restaurants and tourism businesses at the internationally known finish that provides Nome’s businesses with the lion’s share of their annual income. Despite a few protests of restaurant owners and bar-keeps seeking to stay open during a week whose profitability sustains them for a year, Nome’s residents and City Council endorsed the recommendations by its emergency medical teams and doctors to shut down, halt non-essential air travel, and request spectators and some non-essential staff to stay home.

Race Marshall Mark Nordman said that Iditarod officials pared back the race’s staff, cancelled the annual awards banquet and consulted with local villages to assist with changing the checkpoint locations from inside the villages to the outskirts to protect the residents and the mushers from potentially infecting each other. Food and straw bedding flown in for the dogs, along with sleeping bags for the mushers, were deposited at the makeshift checkpoints, to ensure a scaled back but warm and protected space.

With past epidemics in mind, the tribal leadership of the remote Alaskan Native villages of fewer than several hundred residents, many living in multi-generational homes, was adamant about protecting their sparse and close-knit populations. The isolated villages along the Iditarod route, as others in the expansive state, lack roads or health clinics and can be reached only by dogsled, plane or snowmobile. With insufficient access to medevac flights, the logistics of timely movement of sick people to medical hubs or the state’s high level care facilities as far away as Anchorage is often impossible.

The coronavirus gives contemporary relevance to a deep historical memory of previous deadly epidemics in Alaska. Perhaps the most commonly known virus to impact Alaska Native communities was the 1918 Influenza pandemic that, according to Alfred W. Crosby, author of America’s Forgotten Pandemic, killed some 30 million worldwide, and, according to The Cruelest Miles, some 2,000 Alaskans. Seven years later, in 1925, a diphtheria outbreak, brought by seafarers or miners, enveloped both Nome and its nearby villages. Like the 1918 flu pandemic, the Alaskan Natives had the greatest risk, with scant resistance to the viral or bacterial infections brought by the outsiders.

To keep the death numbers down required acts of innovation, courage and heroicism that often defines Alaskans. According to Stanley Scheindlin in The Drug that Launched a Thousand Sleds, the region’s Nome-based doctor, Curtis Welch, predicted an unstoppable mortality rate without the anti-toxin serum needed to eradicate the diptheria infection. Mindful of the deadly 1918 pandemic that had decimated Native villages across Alaska’s interior, the doctor contacted the U.S. Public Health Service and Alaska’s Territorial Government to ask for help.

Getting the diphtheria anti-toxin to Nome posed a formidable problem to a town that had no roads and was accessible only by boat, plane or sled dog. That winter, Nome was blocked by sea ice that froze the harbor and was also was unreachable by bush plane whose water-cooled engines would likely freeze up in the cold and the wind. Public health officials – concerned as the number of cases were mounting, and aware of the dogsled trails that were once used to haul gold, to make postal deliveries or for community travel amongst villages – opted to deliver the time-sensitive serum by an unprecedented, non-stop dogsled relay.

Co-authors Lani and Gay Salisbury, The Cruelest Miles, described the challenges and the resolve to save lives. 20 men and 150 dogs relayed the serum, driving through blizzards, ice fogs and howling winds in “selfless pursuit” of their humanitarian goal of getting the serum to Nome before it expired. With a reputation as the fastest driver in Alaska, many times winner of the All Alaska Sweepstakes, Leonhard Seppala was assigned the last and longest leg of the effort with his 20-dog team and his remarkable lead dog, the Siberian Husky, Togo – whose fine statue sits in New York’s Central Park. Sappala’s fellow musher and gold-field mate Gunnar Kaasen, also Norwegian, as was the 2020 Iditarod winner, joined the relay. Seppala loaned Kaasen his lead dog, Balto, who mushed, non-stop, through the last two turns of the relay, bringing the life-saving serum to Nome in a quarter of the time that a dog team would ordinarily take. For 700 miles over ice, snow, ice-cracked rivers and raging storms, Balto led his team to arrive just two days before the serum would expire. Both in Nome and the stranded villages, lives were saved, with both courageous lead dogs, Balto and Togo, becoming a centerpiece to historical memory. (Also see Stanley Scheindlin, “The Drug that Launched a Thousand Sleds”, Molecular Interventions, vol. 8, Issue 4 (August 2008), p. 152.)

The story and reality of the 1925 serum run is sacred to many Alaskans, both Native and non-Native, having become apocryphal to many who call the life-saving serum run the “inspiration” for the Iditarod. But, along with the heroic efforts to get the serum to Nome by dogsled relay in record time, three realities converged regarding the origins of the Iditarod. According to the classic book Gold, Men and Dogs, author A A Scotty Allan, described the origins of the Iditarod as one to honor the then-defunct All Alaska Sweepstakes where mushers and their dog teams followed the old gold haul and postal delivery trails. Allan described a meeting in a Nome gold-town saloon where the All Alaska Sweepstakes, the “oldest organized sled dog race in the world”, was founded. In 1908, the first 408 mile race, followed the camps, Native villages, and gold mining settlements. When gold mining diminished, interest in sled dog racing waned, and then stopped.

But just after the 1967 centennial anniversary of America’s purchase of Alaska from Russia, with sled dogs mainly replaced by snow machines, several dog team owners and mushers for the U.S. Air Force reignited interest in a competitive dog team race, in 1973, to cover a large part of the old trail. According to the Old Iditarod Gang in Iditarod: The First Ten Years, the revived long-distance race took place with no roadmap and minimal instruction, following some of the of the original post-office and gold-hauling sled dog trails.

By 1978, a convergence of interests indelibly marked the Iditarod as deeply part of Alaskan, if not national, culture, when the U.S. Congress established the Iditarod as a “National Historical Trail“. The Iditarod Trail, placed under the jurisdiction of the Bureau of Land Management, had as its primary purpose a combined commemoration of the role that sled dogs played in the gold fields during Alaska’s gold rush and also acknowledgment that Native Villages fully depended upon sled dogs for all manner of transport.