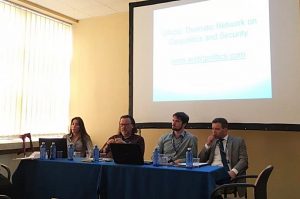 Barbora Padrtova, Expert in the Geopolitics and Security Unit at Polar Research and Policy Initiative, attended the 24th World Congress of Political Science (IPSA), in Poznan, Poland, as a panelist on the panel ‘Inequalities in the Arctic Part 1: Where Global Interests Meet Regional Realities’.

The following is an excerpt from the conference website.

Congress Theme: Politics in a World of Inequality

Both recognition issues and inequalities have become central to today’s politics. Regional, religious, cultural and other identities have been mobilised and demand political recognition and inclusion. At the same time, increased reliance on markets and indeed the very creation of global markets has made it harder to address North/South issues or for national polities to address inequality ineffectively.

In many Western democracies, there is a decline in redistribution, and government programs are no longer offsetting the inequality generated by the market. Public opinion researchers looking at the welfare state have suggested that increased ethnic and racial diversity has weakened public support for such redistribution. Public policy researchers have, in turn, explored the effects of inequality on health outcomes and a range of other measures of social well-being. Normative political theorists have set out arguments for greater equality in terms of human rights and the unlocking of human capabilities, as well as social utility. Political economists and others have examined the impact of free trade agreements and, in particular, investor-state dispute resolution mechanisms in reducing the power of national governments to regulate.

Inequality and recognition issues have helped spark both old and new social movements, most recently the Occupy movement that spread from the USA around the world. In the Middle East and in other regions, powerful national mobilisations have shaken and eventually overturned a succession of governments. Political science provides a lens through which to view how both distributional and recognition issues are placed on the political agenda by movements with few material resources. It also sheds light on the political values and institutional frameworks, both local and transnational, which shape responses to the dynamics of global markets, labour migration, and increased ethnic and cultural diversity.

The 2016 IPSA World Congress is a timely occasion on which to refocus the attention of political scientists on issues of redistribution and recognition in all their complexity. These are issues confronted by political actors all over the world and to which political science can bring important insights. It is an opportunity to once again demonstrate the relevance of political science to political practice.