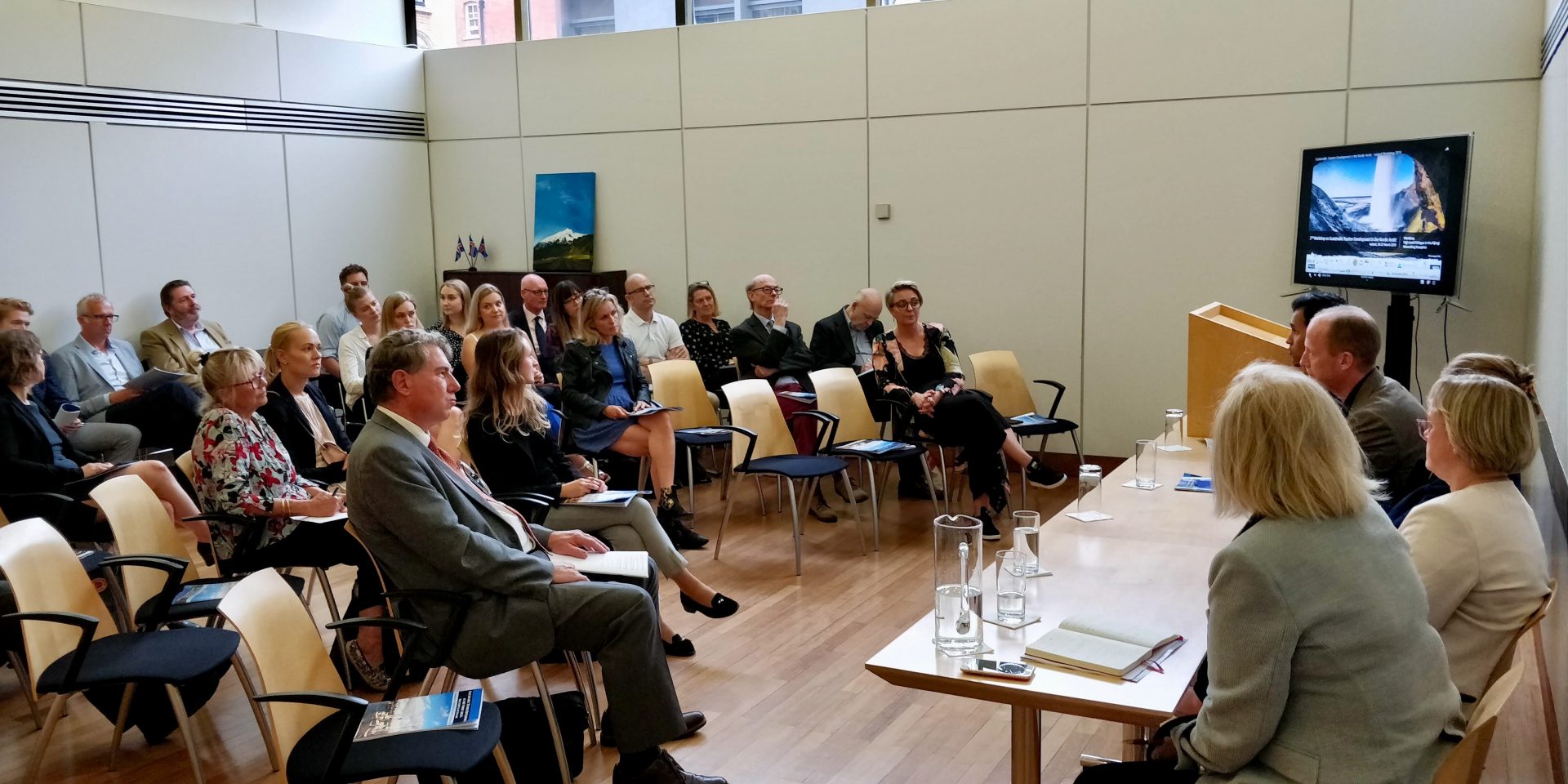 On 26 June 2019, Polar Research and Policy Initiative (PRPI) had the great pleasure of hosting an evening on Sustainable Arctic Tourism – featuring a panel discussion, screening, report launch and networking reception – at the Embassy of Iceland in London.

The evening began with Ms. Þurý Björk Björgvinsdóttir, First Secretary in the Embassy of Iceland in London, providing an introduction to Iceland’s priorities as the current Chair of the Arctic Council and current President of the Nordic Council of Ministers. Given Iceland’s surge in popularity as a tourism destination in recent years, Iceland understands well both the opportunities and the challenges accompanying tourism, especially when the number of visitors far surpasses the number of inhabitants and its implications for certain popular routes and associated towns/communities and infrastructure. Sustainable tourism development, hence, ranks highly on its agenda domestically as well as within multilateral forums such as the Arctic Council and Nordic Council.

We then formally launched the report and screened the film of our 2nd International Workshop on Sustainable Tourism Development in the Nordic Arctic, held in Northern Iceland in March 2019. Since 2018, Polar Research and Policy Initiative (PRPI) has joined forces with the University of Southern Denmark (SDU) to host a multi-year, cross-disciplinary, international project on Sustainable Tourism Development in the Nordic Arctic, with the support of Nordregio (Nordic Council of Ministers), the University of the Arctic (UArctic) and the Danish Ministry of Higher Education and Science. The project also involves the active participation of a number of institutional partners across Europe and North America, including governments, tourism boards, tour operators, universities, think-tanks and foundations. For a full list of partners and further details about the project, click here.

The network’s aim is to investigate how to utilise existing human capital, natural resources (especially marine living resources) and infrastructure capacity to develop innovative sustainable tourism that can diversify and make Arctic economic development more resilient. This is to be achieved through three interrelated workshops in the Arctic regions of the Nordic countries that bring together policymakers, tourism boards, industry representatives and the world’s finest tourism researchers. The first workshop was hosted in Northern Norway in April 2018, while the second workshop was held in Northern Iceland in March 2019. The Iceland workshop was held in Akureyri, Húsavík and Reykjavík, followed by a high-level dialogue hosted in the Alþingi – the Parliament of Iceland – and a networking reception hosted by the Ambassador of Canada to Iceland, Dr Anne-Tamara Lorre.

We were pleased to share at the event in London the report and film we have produced since: the report provides the aims, objectives and proceedings of the workshop, while the film offers a glimpse into the workshop itself. We then had a panel discussion that brought together five speakers hailing from different backgrounds geographically and professionally, but sharing an interest in tourism development in the Arctic:

We were also excited to announce formally that we are developing an Arctic Travel Association, a membership-based organisation for tourism boards, tour operators and tourism-relevant businesses, investors, governments, researchers and media houses that will champion sustainable tourism development in the Arctic and serve as a centre of excellence for knowledge exchange and a range of policy and business support services. Sarah Johnson of We Are Lotus outlined briefly the plan for the association, and invited interested tourism industry stakeholders and their governments to join. We will launch the Arctic Travel Association formally at the Arctic Circle Assembly in Reykjavik, Iceland, in October 2019.

Should you wish to join the Arctic Travel Association, please get in touch with our team at [email protected]

Here is the image gallery of our evening on Sustainable Arctic Tourism at the Embassy of Iceland in London, 26 June 2019

Here is the short film about our 2nd International Workshop on Sustainable Tourism Development in the Nordic Arctic, Iceland, 18-22 March 2019 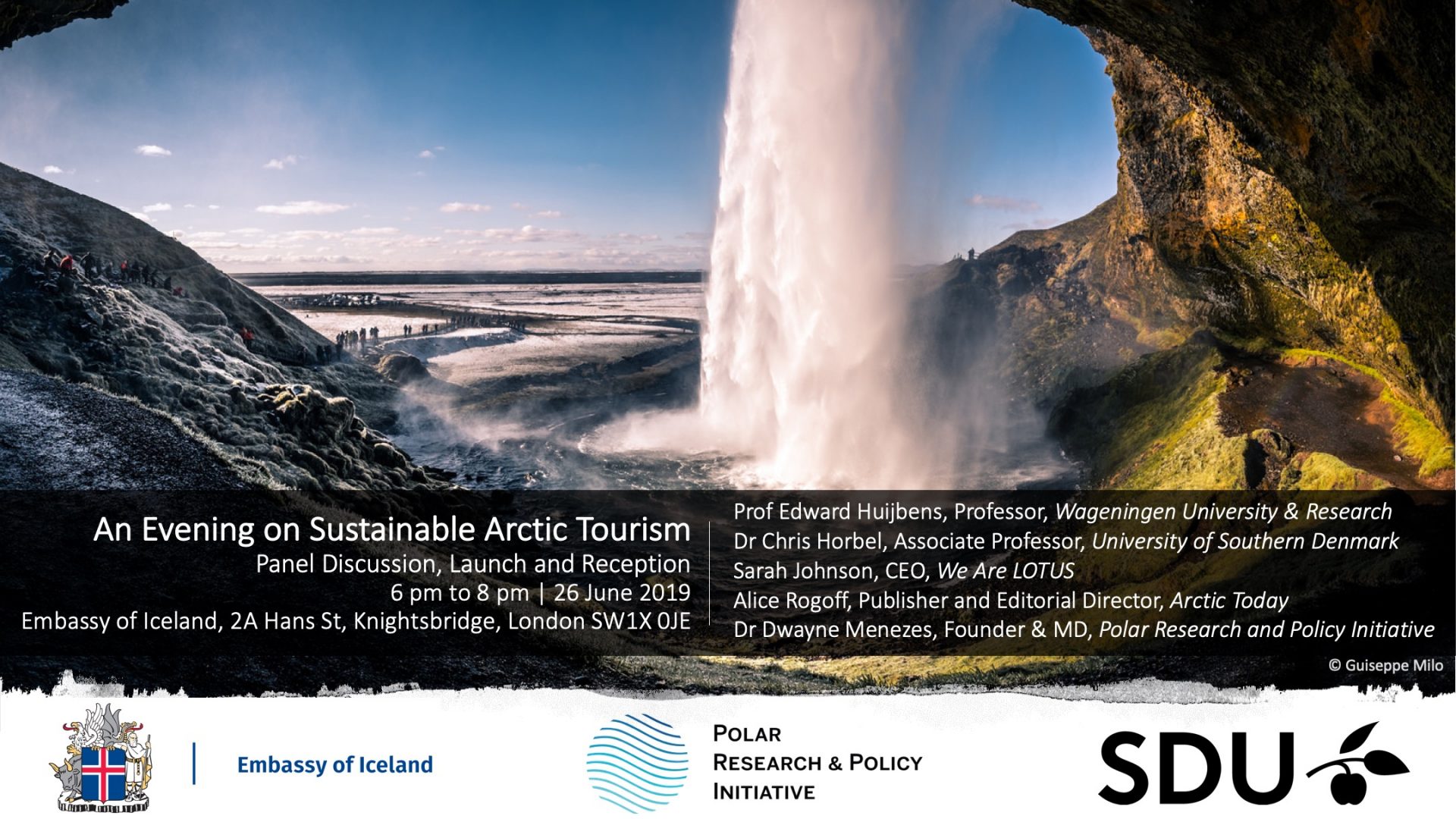