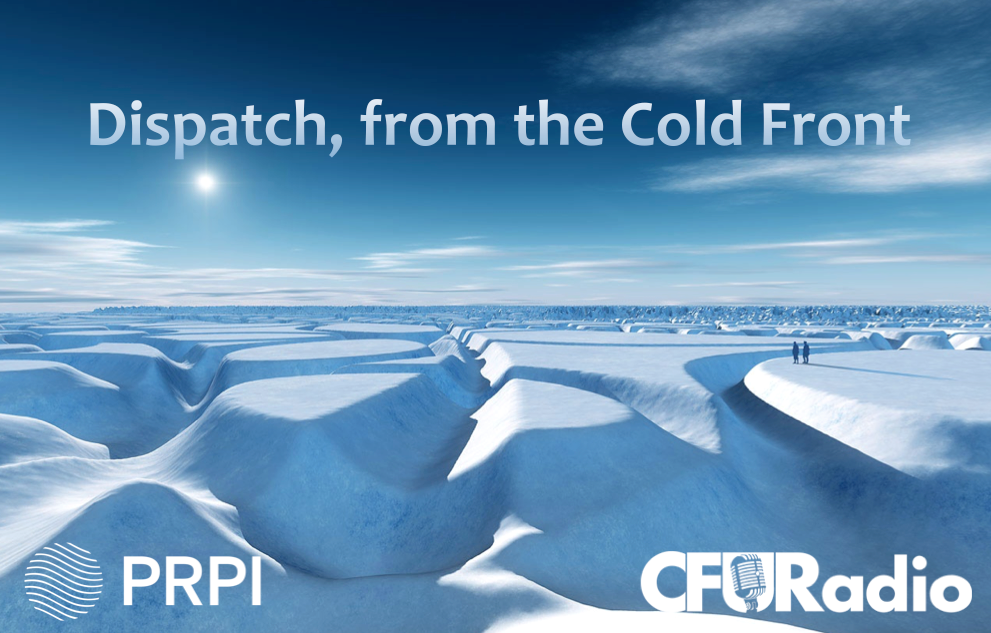 Press release from the Polar Research and Policy Initiative

The UK-based think-tank Polar Research and Policy Initiative (PRPI) is pleased to announce the launch of its new bi-monthly ‘Arctic music and policy’ radio show Dispatch, from the Cold Front. Co-produced with the Canada-based CFUR-FM, the show is broadcast from Prince George in British Columbia at FM 88.7 and is streamed online via Mixcloud: https://www.mixcloud.com/Cold_Dispatch/

The announcement comes as PRPI marks its first anniversary since it was founded in February 2016. Dispatch, from the Cold Front will consist of Northern music from across all eight Arctic states interspersed with policy news from Arctic institutions and governments. The show will be hosted by Alycia Mutual, Fellow in the Arts, Culture and Heritage Unit at PRPI and initially comprise two hour-long broadcasts per month.

Discussing the show, Miss Mutual stated, “There are some incredibly talented Northern artists that we look forward to showcasing. Whether you live in the Arctic region or are simply interested in Arctic issues, Dispatch, from the Cold Front champions the idea that policy and culture do not have to operate separately. Listeners can have an interest in music as well as stay updated on issues that are developing in the Arctic.”

The Arctic region spans thousands of kilometres. Due to its extensive size, diversity and remoteness, connecting with Northerners across the Arctic can pose a challenge for organisations and media outlets working in the region. At the grassroots level, one of the ways that Northerners identify with their community and stay up to date with local and global current events is through radio. In this sense, organisations working in the Arctic can use radio as a means to build relationships with Northern communities.

Christophe Milhères, Director at PRPI, noted, “Dispatch, from the Cold Front is a milestone for PRPI, as it is very much in line with our philosophy. Since its inception, PRPI has sought to increase its engagement with Northern communities, provide innovative means through which one may keep abreast with major developments across the North, and take the Arctic and its vibrant culture out into the world. Our radio show brings this vision to fruition. We are very pleased to partner with CFUR Radio on this project.”

Outlining the plans for the show, Dr Dwayne Ryan Menezes, Director at PRPI, added, “Our aim is to get the radio show distributed to FM and AM stations across and beyond the Arctic, so it can be heard not just in remote communities across the circumpolar North, but also in homes and offices in London, Brussels, New York and Singapore. We are also exploring the possibility of increasing the frequency of the show so listeners can tune in to new broadcasts on a weekly basis. We will also diversify our content to include interviews, travel stories, and government announcements.”

At this stage, PRPI is welcoming grants, donations, advertisements and sponsorships from interested individuals and communities, charities and trusts, governments and statutory agencies, as well as businesses and non-governmental organisations. Likewise, the team at PRPI is particularly keen to hear from FM and AM stations and radio networks keen to broadcast the radio show. For further information, please contact Dr Dwayne Menezes or Mr Christophe Milheres or visit https://www.mixcloud.com/Cold_Dispatch/

Polar Research and Policy Initiative (PRPI) was launched in February 2016 as a UK-based independent, international foreign policy think-tank dedicated to Arctic and Antarctic issues. Based in London, PRPI seeks to facilitate a crucial, sustained and high-impact dialogue between scholars, policymakers, journalists, indigenous peoples, and the public, private and third sectors, about the most important issues facing the Polar Regions. The scope of PRPI’s work ranges from the natural and built environments to geopolitics and security, indigenous peoples, and arts, culture and heritage, as well as relevant industrial sectors such as shipping, fisheries, tourism, energy, mining and ICT. Its work is based on three pillars: sustainable development, environmental stewardship and indigenous participation. For further information, please visit http://www.polarconnection.org

CFUR-FM is a Canadian FM radio station, broadcasting at FM 88.7 in Prince George, British Columbia. A campus radio station based at the University of Northern British Columbia, the “FUR” (as it is known colloquially) is governed by the Education Alternative Radio Society, a non-profit corporation consisting of students and other community members who promote CFUR via membership drives, fundraisers, and on-air broadcasting. For further information, please visit http://www.cfur.ca

To learn more about the radio show and PRPI, please contact: