What is the connection between Singapore and the Arctic region? 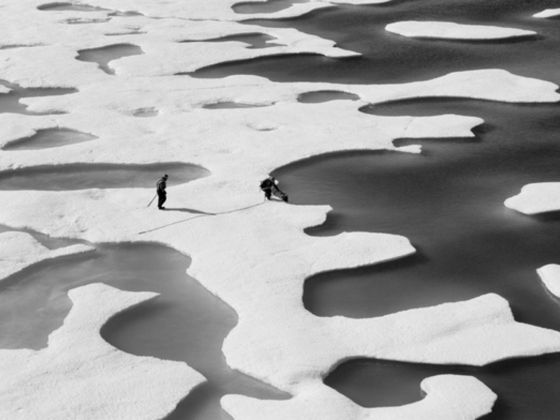 Image: Crew members of an icebreaker in the Arctic Ocean.

This article was written by Sam Tan and published in TODAYonline on 24 May 2016.

One country is a small tropical island near the equator, and the other, an icy region near the northern tip of the Earth. But both Singapore and the Artic region share common concerns in climate change and global warming, with many potential areas for cooperation, said Minister of State (Prime Minister’s Office, Manpower) Sam Tan in a speech at the Arctic Circle Greenland Forum last week held in Nuuk, Greenland. He listed several collaborations, such as the development of maritime infrastructure to facilitate safe shipping as new sea routes open in the Arctic, and exchanges between universities in climate change and sustainable development research. Singapore has been a permanent observer on the Arctic Council since 2013. Below is an excerpt from his speech …

The theme for this year’s Forum is economic development for the people of the Arctic. In the last two days, we have gained insights on how there is immense potential for growth in the region. But as the speakers before me have reminded us, a responsible approach to economic development is vital.

It should also be carried out with respect for the environment and due regard for the peoples living in the North. While Singapore is still a newcomer to the Arctic, I hope to share more on why this approach is important for Singapore.

Let me first present the view of the Arctic from Singapore. At first glance, Singapore’s connection to the North is not readily apparent. In terms of ecology and distance, we could not be further apart. Singapore is a small, tropical island located just over one degree north of the equator. We are 7,000km away from the Arctic Circle and 11,000km away from Greenland.

Despite this distance, Singapore and other parts of the world are actually quite closely connected to the Arctic because of climate change, global warming and weather patterns. The reason for our interest and concern regarding the Arctic is simple. As a low-lying coastal nation, Singapore is especially vulnerable to rising sea levels. If global temperatures continue to rise, many parts of Singapore could eventually be submerged under water.

Climate change is real. Earlier this year, I was in Tromso, Norway, for the Arctic Frontiers Conference. The temperature then was a relatively warm 2-3°C despite being January, a cold month in the arctic calendar. At the same time, the East Coast of the United States was experiencing a very severe blizzard affecting over 100 million people.

Closer to home in Singapore, March 2016 was the driest and second warmest in our history, and on April 13, we experienced our highest temperature in a decade, of over 36°C. I have heard that this April had been the warmest on record in Greenland, too, with a temperature of nearly 18°C. This has caused the annual ice sheet melt season to start nearly two months earlier than expected.

With the region warming twice as fast as the rest of the planet, the Arctic is as critical as a barometer for global climate change.

At the same time, a warmer Arctic will undoubtedly present new economic possibilities. In particular, the opening of new Arctic water channels, such as the Northern Sea Route, will significantly reduce travel time between Asia and Europe.

The new sea routes present both challenges as well as opportunities. Singapore has one of the world’s busiest ports, receiving about 120,000 vessels each year. Our marine industry has built up strong credentials in shipbuilding and repair, offshore engineering, port operation, and support services. We believe Singapore is in a position to assist in the development of maritime infrastructure to facilitate safe shipping in the region.

As a non-Arctic state, our engagement in the Arctic revolves mainly around the science, technology, engineering and management (STEM) framework. Our universities and research institutions are cooperating with their counterparts in Arctic states to advance the common knowledge of critical issues.

For example, in November last year, the National University of Singapore (NUS) signed a Memorandum of Understanding with the University of Alaska Fairbanks to collaborate in areas such as Arctic climate change, sustainable development, oil spills research, and cold regions engineering.

In cooperating with our friends in the Arctic states, we aim to bring the discourse on Arctic issues to our corner of the world through various workshops and conferences. For example, in November 2015, Singapore hosted the Arctic Circle Singapore Forum, the first of its kind in Asia.

We were happy to welcome Iceland’s President Olafur Ragnar Grimsson as one of the keynote speakers. The NUS’ Centre for International Law and the University of Tromso’s K G Jebsen Centre for Law of the Sea also co-organised a conference on the Governance of Arctic Shipping in December 2015.

Thanks to these efforts, there has been an encouraging trend of Singaporeans taking a greater interest in and around the Arctic.

However, not all Singaporeans are casual tourists visiting the Arctic region. Some are there for a serious purpose. One Singaporean had competed in the eight-day Arctic Ultra Marathon across Canada in March this year and came in second place. Three other Singapore participants also completed the North Pole Marathon, which was just held in Svalbard.

In August this year, three months from now, the NUS Energy Studies Institute will organise a conference on Arctic science, technology and policy in Singapore. This conference will focus on issues such as remote access to energy, maritime infrastructure and shipping, renewable energy transitions, and the role of research and development.

We hope that this conference will help foster and sustain discourse and dialogue among relevant experts from within and outside the Arctic region.

Singapore also works with the Arctic Council’s various working groups. Our National Parks Board (NParks) works with the Conservation of Arctic Flora and Fauna (CAFF) to track Arctic migratory birds that stop in Singapore during the Arctic winter season.

Our Sungei Buloh Wetland Reserve provides a sanctuary to 34 species of Arctic migratory birds, such as the Curlew Sandpiper and the whimbrel. Some of these birds were paid a VIP visit by President Grimsson when he visited Singapore in November last year.

While Singapore’s sea conditions are quite different from the Arctic, we have also shared our experience in maritime emergency preparedness through the Emergency Preparedness, Prevention and Response (EPPR) Working Group under the Arctic Council.

Through this platform, we have regular exchanges to share Singapore’s approach to inter-agency coordination in managing oil spills and to share our experience in trials in using drones to monitor oil-spill effects.

Our private sector is also seeking to identify areas to contribute to sustainable resource development in the Arctic. Our companies are developing capabilities to leverage the economic potential of the region. Our maritime industry has built up strong credentials in shipbuilding and repair, offshore engineering, and marine support services.

Oil rig and shipbuilding company Keppel has constructed a number of ice-class vessels, including the first icebreakers built in Asia in 2008. Keppel is now working with oil majors and drilling contractors to develop the world’s first Arctic-grade, environmentally friendly “green” rig.

Sustainability is not the only consideration. In line with the Nuuk Criteria, Singapore recognises that the Arctic states and their indigenous peoples, who have lived in the North for generations, are crucial stakeholders in the region.

Singapore has reached out to the Arctic Council Permanent Participants to exchange views on various aspects of public administration, health, education, port management, and climate change adaptation, and to explore how we can better understand and support their development needs.

Under the Singapore-Arctic Council Permanent Participants Cooperation Package, we provide full scholarships for students from indigenous communities to pursue selected post-graduate programmes at Singapore institutions in disciplines such as maritime law, public policy and administration, and maritime studies.

The examples I shared so far are just a few ways in which Non-Arctic States like Singapore can add value to the development of the region.

In recent years, there has been overwhelming interest from many countries to become more involved in Arctic affairs. While none of us have the ability to isolate ourselves from the impact of environmental change, Singapore believes that it is the Arctic states and indigenous communities who must live with the immediate consequences, and, hence, they shall remain as the main stewards of the North.

We hope to do more to promote awareness of the Arctic, and to contribute positively and constructively to its sustainable growth, and the empowerment of its peoples.