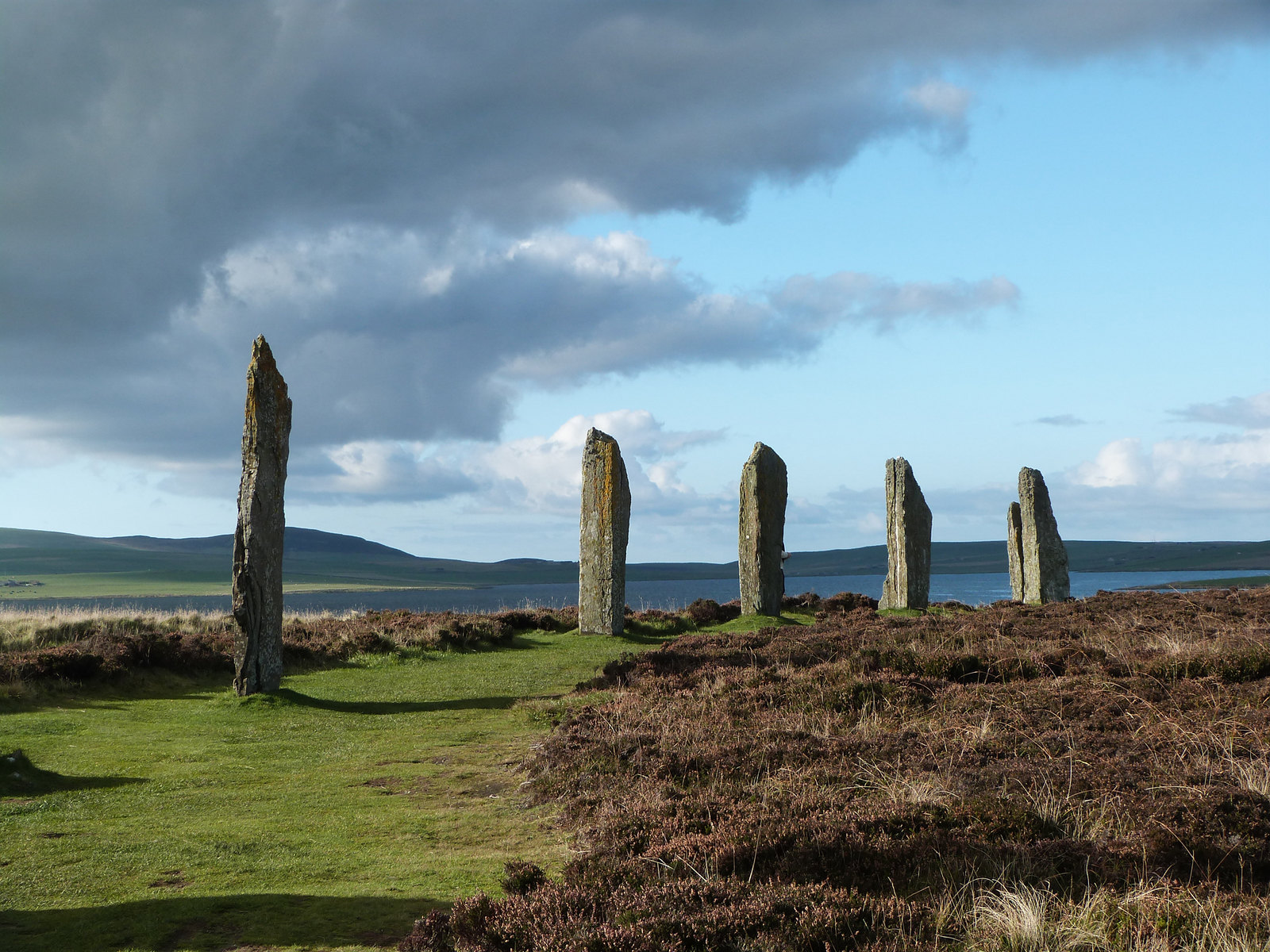 Ring of Brodgar, Orkney. The  most northerly of Britain’s stone circles, the henge at Brodgar is the centrepiece of the ‘The Heart of Neolithic Orkney’, a UNESCO world Heritage Site since 1999. © Mason Taylor/Simon Taylor/Flickr.

Climate change is posing a fundamental threat to UNESCO World Heritage sites. The warning may be stark, but the trends necessitating it are truly alarming: iconic Shark Bay for example, a World Heritage-listed marine ecosystem site in Australia, is at catastrophic risk due to its extreme vulnerability to climate change. Just as all heritage coral reefs will disappear in this century unless CO2 emissions are drastically reduced.

We should all be worried because World Heritage sites are invaluable pieces in the fabric of civilisation and Earth’s history. While there are different categories – natural, cultural and mixed – they all have something in common: they all have met the stringent requirement of possessing Outstanding Universal Value or “cultural and/or natural significance which is so exceptional as to transcend national boundaries and to be of common importance for present and future generations of all humanity.” In other words, criteria dictate that these be either cultural sites that represent masterpieces of human creative genius, or sites that exhibit superlative natural phenomena or significant natural habitats for conservation of biological diversity or a mixture of all of the above.

One of the most important messages in the push for global awakening about the climate crisis is that it leaves a heavy birthright for future generations in having to bear the brunt of negative transforming effects in perpetuity. But the other side of the climate change coin is equally important, confronting us about potential legacies we will not pass on to generations to come. The risk of deterioration to universal treasures demands rapid assessment to aid in the prioritisation of mitigative action points.

Against the backdrop of this pressing urgency, a group of researchers led by Scott Heron and Jon Day of James Cook University and Adam Markham of Union of Concerned Scientists have developed a tool to do just that. The Climate Vulnerability Index (CVI) has been designed specifically to assess climate change risks to World Heritage. The CVI framework aims to bring prominence to the Outstanding Universal Value of sites, and the potential community vulnerabilities created due to their loss or deterioration.

Importantly, the framework has proven to be robust and repeatable through test rounds. The first pilot phase assessed climate risks to natural heritage. Scotland’s Heart of Neolithic Orkney World Heritage Site, comprised of extraordinary stone monuments constructed by prehistoric people, was the first cultural heritage site to apply a climate vulnerability assessment. This trial was significant not only for the long-view management of this particular property, but also because it highlighted the CVI framework’s applicability to all types of World Heritage that can now similarly undergo rapid vulnerability assessments.

The Heart of Neolithic Orkney climate vulnerability assessment identified precipitation change, sea level change, and storm intensity and frequency as the three key climate drivers that present the greatest threat to Orkney’s heritage sites over a time scale to 2050. Their compound impacts have triggered the highest Outstanding Universal Value vulnerability, mitigated only by a high level of adaptive capacity within the community. The report concluded that climate impacts are increasingly likely to add to a wide range of compounding pressures including growing tourism numbers and infrastructure development that are impacting Orkney’s heritage and its cultural resources. These results can be used to develop a strategic government response in order to mitigate risks.

The CVI framework offers a multifaceted benefit via its rapid deployment potential. Because the assessment takes place in a 2-3 day workshop, it generates quick, actionable results. And because the process can be undertaken rapidly, it is feasible to repeat periodically as part of management processes.

With Scotland likely to apply the CVI to its other heritage sites, there is potential for the exchange of lessons with Arctic partners about the management of threatened heritage sites. Arctic coastal sites are also under existential threat from climate change and coastal erosion. The Arctic’s unique habitats and areas rich in natural and cultural value are at risk of damage or loss, much like Orkney’s. Scotland, much like many Arctic destinations, has seen a rise in cruise tourism and concern about impacts from the trajectory of developments on local communities. And the Arctic region too, like Scotland, has been testing grounds for climate vulnerability studies as this latest example of an integrative assessment developed for the marine transport and aviation sectors shows. Yet the Arctic region is currently under-represented on the World Heritage List, with only five recognised sites located above the Arctic Circle, and, of these, only one in the cultural category.

In 2017, the International Union for Conservation of Nature (IUCN) launched a scientific assessment of globally significant ecosystems in the Arctic Ocean that may be of Outstanding Universal Value with respect to the natural criteria for World Heritage status. The IUCN is an official advisor to the World Heritage Committee on natural heritage, and their report identifies seven Arctic marine areas as priorities for inscription on the World Heritage List. The Remnant Arctic Multi-Year Sea Ice and the Northeast Water Polynya Ecoregion is one such proposed site with the thickest, oldest ice in the Arctic and a “striking combination of Arctic marine phenomena – multi-year sea ice, a globally unique habitat, and its associated species.”

The intrinsic, universal value of multi-year sea ice and other striking cryospheric and cultural features of the Arctic region must be a priority for inscription on the World Heritage List. The ecological relationship between the Arctic Ocean and other existing World Heritage sites is a point stressed in the IUCN report, and this frames the issue of inscription as a mandate of the Convention. Similarly, the IUCN report recommends that the relationship between local communities and the Arctic’s natural marine environment necessitates a thorough evaluation of Outstanding Universal Value in the Arctic Ocean and the broader Arctic region from a cultural and traditional knowledge perspective.

Collaboration on mitigation and preservation work is a collective responsibility, and the CVI can help this process for natural and cultural heritage alike. The applicability of CVI may reach beyond existing heritage listings and prove to be invaluable for as-of-yet unlisted Arctic sites. With careful consideration of Outstanding Universal Value potentials, the CVI could be used to assess proposed and potential sites as candidates for rapid, prioritised evaluation for listing. In a rapidly transforming Arctic region, the clock is ticking for globally vital habitats, resources and cultural heritage, and this potential utility of the CVI should be explored. Having tested the CVI as a rapid risk assessment tool and planning further use, and sharing some of the same hazards and patterns of exposure, the Orkney experience can serve as a vehicle for greater cooperation between Scotland and Arctic actors in service of existing and future Arctic heritage sites.

Perhaps a most striking feature of the world heritage site designation is that it brings people and cultures together to pool will power and resources to safeguard our common heritage. The Convention commits all 193 signatories to ultimately take joint responsibility for the protection of heritage properties. Last year, the world’s insurers launched a commitment to protect World Heritage Sites. In April 2013, United Nations Security Council Resolution 2100 called to ensure the safeguarding of cultural heritage sites in Mali, marking the very first time that the official mandate of a UN Peace keeping mission referred to the protection of cultural heritage. Protecting heritage properties in conflict areas has been a long-standing practice, and now there is a shift to recognise climate change as the fastest growing threat to the future of World Heritage. Let us hope we can effectively build on this momentum.

Dr Berill Blair serves as a Contributor at Polar Research and Policy Initiative, with a focus on Risk and Resilience. She is currently a postdoctoral researcher at Wageningen University (The Netherlands), with the Environmental Policy Group. Berill is involved with a Netherlands-led contribution during the Year of Polar Prediction (YOPP), working with a multi-team, multidisciplinary project that aims to develop Arctic climate forecast products tailored to key social, environmental and economic needs. Previously, Berill was a researcher at the University of Alaska Fairbanks with an interest in Arctic community resilience and a background in environmental policy and natural resource management. She holds a PhD in natural resources and sustainability, a masters degree in global environmental policy and a bachelor’s degree in computer science. She has over a decade of research experience accumulated through her work in Alaska. Her work took her to northern Alaska communities in a collaboration to test scenarios workshops as a planning tool for community sustainability; and to work with Iñupiat tribal leaders to document indigenous perceptions of risks and local control over sustainable futures. Previously, she studied the politics of oil development in Alaska focusing on the impact of regulatory institutions on indigenous self-determination. Berill’s policy interests include climate change resilience and adaptation, risk governance, scenario planning, and Arctic geopolitics.