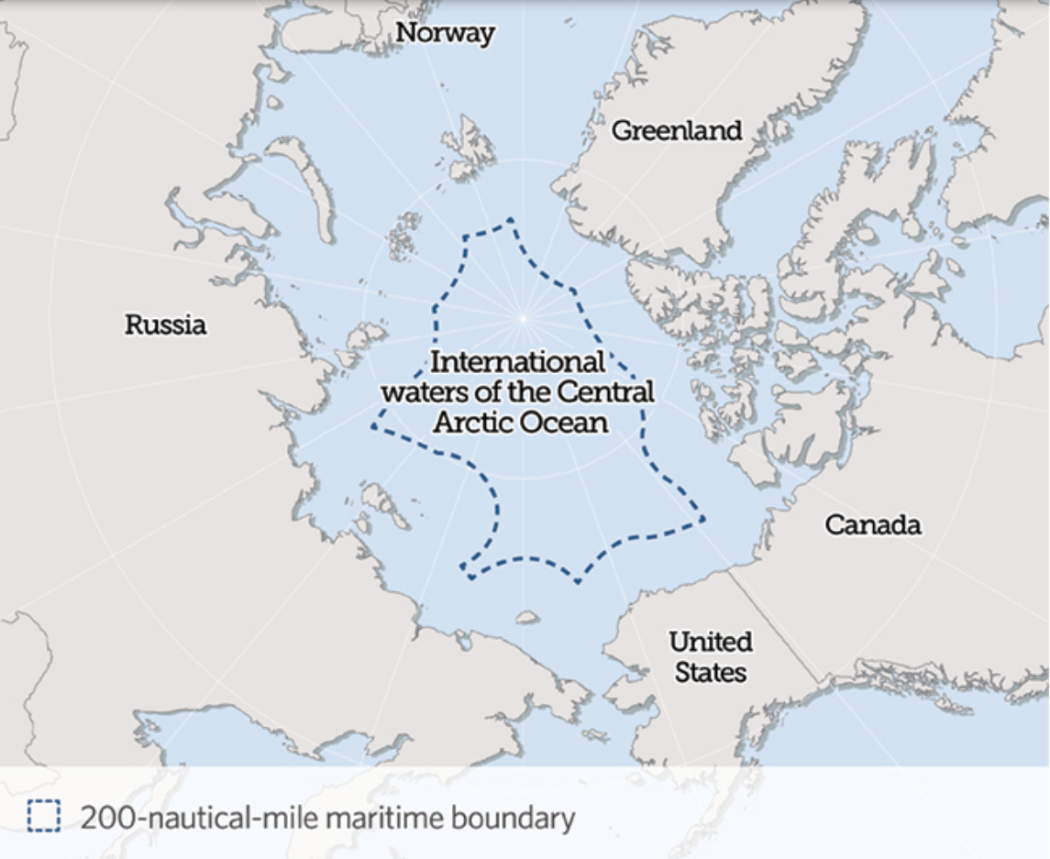 The protection of biodiversity beyond national jurisdiction is an issue of immense importance for global conservation efforts. After all, around 61% of the world’s oceans are areas which are not part of any state’s 200 nautical mile exclusive economic zone (EEZ), which makes them, in principle, susceptible to uncontrolled commercial exploitation.

The Arctic has seen its share of fishing, whaling and sealing in the past as well as in the present. And with the melting sea ice in the Central Arctic Ocean (CAO) – the marine area around the North Pole beyond any littoral state’s EEZ – commercial fishing is likely to increase in the future. Especially the North Atlantic and the Bering Sea are regions in which major fishing nations conduct their fishing operations, which could extend into the Central Arctic Ocean in the future the more the ice recedes.

The Agreement to Prevent Unregulated High Seas Fisheries in the Central Arctic Ocean (CAO Fishing Agreement) was signed on 17 October 2018 by ten major fishing nations: the Arctic Ocean coastal states Canada, the US, Norway, Denmark (on behalf of Greenland and the Faroe Islands) and the Russian Federation; and five non-coastal states and bodies, Japan, China, Iceland, South Korea and the European Union.

The CAO Fisheries Agreement follows a threefold objective: first, the prevention of unregulated fishing in the CAO. This is to be achieved through the application of the precautionary approach to conservation and management, meaning in case of gaps in knowledge to apply stricter measures. Second, the agreement is to provide conservation of the marine environment and to provide for healthy marine ecosystems. This is, however, not considered to be the only means to do so, but this objective is part of a long-term strategy for marine ecosystem protection. Third, it is to provide for the sustainable use of Arctic fish stocks.

The CAO Fisheries Agreement is an agreement concluded between states or state-based entities (the EU). It is, therefore, representatives of the governments of these states that were part of the negotiation processes. While that may be so, the Arctic has seen an unprecedented rise of non-state actors participating in Arctic governance – through the Arctic’s indigenous organisations in the Arctic Council, known there as the Permanent Participants.

While the CAO Fisheries Agreement in not an agreement negotiated under the auspices of the Arctic Council, the normative standard of including indigenous peoples in the negotiation processes was nevertheless adhered to. The respect towards the Arctic’s indigenous population is, furthermore, underlined by the fact that the agreement itself makes reference to both the UN Declaration on the Rights of Indigenous Peoples and to indigenous and local populations as knowledge holders with a right to be consulted.

What is particularly relevant in this regard is that indigenous and local knowledge is considered on par with scientific knowledge. Therefore, to effectively protect Arctic fish stocks, both scientific and indigenous/local knowledge are crucial. This corresponds to other agreements, such as the Paris Agreement on Climate Change where the same approach is taken.

With Canada now being the third party to ratify the agreement (after the Russian Federation and the EU), its entry into force is moving closer (once all ten parties have ratified it). However, the CAO Fisheries Agreement once again shows that despite the dominance of nation states, it is indigenous and local populations that are considered elementary for the successful conduct of conservation efforts. Once the agreement has entered into force, indigenous and local populations have yet another instrument to substantiate their claims as knowledge holders, whose protection is indispensable to achieve positive conservation results.