The Shadow of the Future: The Demand for an Arctic Regime 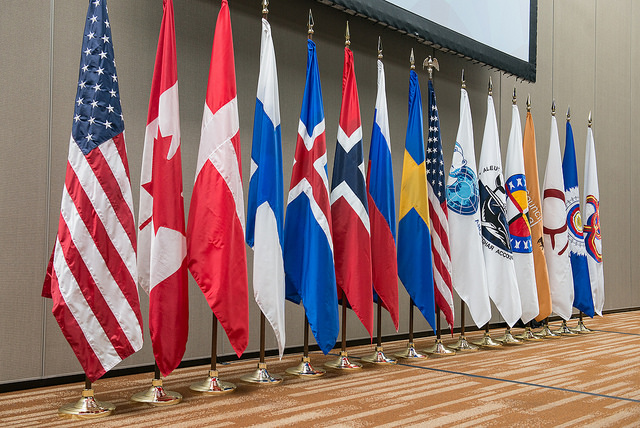 New pathways or old wine in new bottles? Once again, it is necessary to rethink theoretical approaches to prepare the Arctic for the future. To avoid the High North from getting caught up in self-interested politics, Robert Keohane’s idea of political regimes is still appealing. When we look at the Arctic with its complex system of rules, institutions and non-state actors, it is difficult to see a coherent inner structure. As the international system undergoes massive changes with somehow antagonistic processes such as globalisation together with regionalisation, or the rise of non-state actors and the revitalisation of the nation state, the Arctic can be considered as a ‘laboratory’ of the future world order.

Undoubtedly, the ongoing implementation of regional institutions has started a process towards regional cooperation, but the High North is still far away from being a lucid region. Due to the diverse interests and many open questions regarding the exploitation of resources, security or the extension of the continental shelfs, it is difficult to build an institutional framework that leads to common policies. The general lack of trust between the Arctic states is an often-stated argument for the explanation of the slow and sometimes hesitant steps by the Arctic states towards more regional cooperation. Foreign policy that implements a political regime could help to overcome that mistrust and build the foundation for a political system in the Arctic. A little further south, the Baltic Sea region is a good example for undergoing a process of regime-building that has transformed the area into a tight-knit region. Due to its geopolitical situation between the former Eastern and Western Blocs, as well as its massive environmental problems, the Baltic Sea region could be defined as the ‘little brother’ of the Arctic. However, due to the strong devotion to regional cooperation, and a common will to achieve a regime to protect the Baltic Sea and increase the benefit to all member parties, the Baltic Sea regime has become the first regime for the protection of a regional sea, and has created a blueprint for other regions.

A Regime for the Arctic?

A central assumption is that a regime itself is not a political actor, but states can use it as a certain tool to put through their interests more easily. Hence, a regime would function as some sort of ‘catalyst for cooperation’. By this means, cooperation is based on specific ‘issue areas’ within a policy area. The more complex the problem area is, the stronger is the interdependence of the actors. As the Arctic is a highly diversified and multifaceted issue area, the density of interdependence is rather high.

Another ‘hope-for effect’ of a regime is the higher transparency, as well as the continuous exchange of information. If all members of the regime have the same influx of information about what the others are doing, the non-compliance with (informal) norms becomes less likely. This process generally reduces the tendency of political misunderstandings, and binds the states to a comprehensive information policy. Although sanctions are usually not very effective, even the possibility of punishments as well as group pressure will decrease the temptation for hidden actions or agreements.

Yet another reason why the Arctic states should follow an open information policy is what Keohane calls ‘the shadow of the future’. As policymaking in the Arctic is still relatively young, and the institutionalisation is still in progress, today’s decisions are determining the Arctic future massively. A regime that acts as a catalyst to cooperation can prevent decisions which lead to unintended consequences that, in the worst case, are irreversible.

Applied to the Arctic, it is preferable for the states to follow an agenda of transparency, as well as to build up an effective system for exchanging information. Currently, this already works on a ‘soft power’ level through the University of the Arctic and the track-II-diplomacy offered by the Arctic Circle Assembly, and other sub-regional organizations such as the Barents Euro-Arctic Council. By this means, diplomatic misunderstandings or (violent) conflicts are avertible through a current stream of reliable information among all regime actors, and institutionalised by a system of repeat consultations. In general, repeating consultations would moderate the mentioned ‘shadow of the future’ as decisions are made today.

If we go further back in the history of Liberal theory, we see that the idea of open communication, as a foundation for peaceful cooperation, is nothing new at all. Back in 1795, Immanuel Kant wrote down his ideas for a ‘Perpetual Peace,’ and argued that the existence of ‘secret treaties’ will endanger any efforts for peace a priori. Regarding the Arctic, it must be claimed that at this early stage of regime implementation, we still have all options of common policies regarding open and transparent diplomacy. To avoid future conflicts, all members of the Arctic region should recognise the urgency of trustful communication regarding treaties, agreements or informal arrangements.

Benefits of a Regime

It is often argued that the costs of cooperation, compared to its benefits, are too high. When we look at European integration, we see that high costs are a regularly reiterated argument against closer cooperation. In fact, regimes help in reducing the transaction costs between its members and within an issue area. By the establishment of defined procedures for negotiations based on institutional frameworks, the conclusion of agreements will be accelerated. As the agreements come into force earlier, the ‘shadow of the future’ will be averted.

The transboundary Rhine regime demonstrates with the implementation of norms and principles that inter-state cooperation becomes more target-aiming if states cooperate on a lower, regime-based level. Discussions about less controversial but more detailed questions, with less potential for misunderstanding, as well as accelerated debates, are leading to less bureaucracy and a more effective decision-making process. As already mentioned, by increasing effectivity and efficacy, the transaction costs will be reduced. Due to the chance of successful and ‘smoother’ decision-making processes, cooperation in other issue areas will be even more appealing. However, the regime specifies the rules of cooperation, and encourages the states to cooperate in a growing number of policies.

Through the Arctic Council and its rotating presidencies, the Arctic already has a well-suited instrument for implementing ‘small step policies’ towards closer cooperation based on an Arctic governance regime. Moreover, the different working groups of the Council are already covering a wide range of Arctic related issues, and work on detailed questions.

The Arctic Council. Center of the Regime

Due to reciprocity and cooperation, long-lasting political decisions can be implemented in a decentralised way. As there is a constant constellation of actors in the Arctic (regarding the states, at least), reciprocity can, again, promote trust among the states. With a higher level of trust, negotiations and decision-making processes can go through faster. In the end, the transaction costs are lower, and the regime benefits all members. Even though the cost-benefit ratio is not equal to all members, the net effect, or a less frightening ‘shadow of the future’ benefits all.

To keep reciprocity going, institutions must work proactively towards ongoing cooperation with a constant coordination of interests. As, theoretically spoken, the Pareto optimality is unlikely to happen in the real world; regional institutions should be implemented to make the Arctic governance regime work.

In fact, the Arctic Council should become the intra-regional center of the Arctic Governance Regime, and this brings us to the core of this discussion – a regime consolidates the expectation of cooperation. Following the basic foundations of a regime, common principles, general norms, specific rules and agreed procedures, a regime will start the process towards closer cooperation almost by itself, given that the actors’ motivations are trying to reduce their costs and increase their security level by getting more information about the behavior of other members. By iterating interaction, and continuously working together to enhance the cooperation in the foreseeable future, an Arctic governance regime will start a process that would gain more problem-solving potential in Arctic issues and would reduce external pressures on the region. Though the net benefit for a single actor is smaller compared to its own action-capacity, the overall benefit for the whole Arctic would be much higher. Another advantage of a regime is the possibility to include a lot of low level actors such as indigenous people, or sub-regional institutions as the Barents Council, which is of vital interest in the Arctic.

Neorealist approaches, the Regime Theory and Robert Keohane are highly controversial and still the content of heated discussions on the field of International Relations. This is good because rethinking these approaches in the context of the future Arctic will open new opportunities for policy makers, scholars and, not to forget, the people who will be affected by the changes in the Arctic. As mentioned earlier, the Baltic Sea or Rhine regimes are demonstrating that regimes in international politics can work, and are still a tool for building regional cooperation, which is still worth considering. Due to the complexity, diversity and the vulnerability of the Arctic, we have to think about an option that will shape a future for the Arctic which is for everyone’s advantage. The ‘shadow of the future’ should be a bright one.